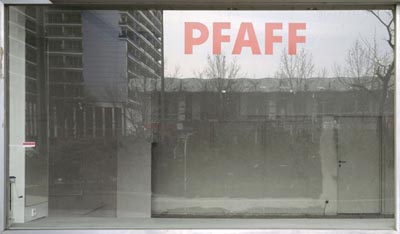 Large-format photographs depict windows: Double or single-frame windows offer views into empty storefronts shortly before renovation - a very typical sight of Berlin. At the same time, the reflections on the glass refer to the surrounding exterior. Although the photographs could be read as being documentary of the recent recession, the ephemeral aspects of the reflections transcend the specificity of the place.

The simultaneous representation of the view into the space, of the reflection on the glass and of the window's surface itself condenses several layers of perception: First, one can see the bare interior space which is separated from its surrounding by the window frame. Then, in another layer, the mirror reflections of the opposite side of the street become apparent and visually merge with the interior. Finally one observes the actual window glass with its scratches, tape residues, fingerprints, graffiti and dirt marks. But the gaze seems to go beyond; the simultaneous presence of these layers leads to the manifestation of a spatial impression that cannot be grasped and that seems to contradict realistic representation. In the end the viewer becomes aware of his own reflection on the photograph's surface as he sees himself standing in the gallery space and he is then, too, integrated into the virtuality of the picture.

Sabine Hornig's exploration of the membrane between the interior and the exterior derives from her sculptural work. The window frame as it is represented in the photograph serves as the picture-frame, and in doing so the actual photographs become insertions into the wall. Therefore the gallery space is always integrated and part of the work. The interior walls of the exhibition space then turn into an outside faÃ§ade, interrupted by the window screens and their reflections. The photographs alter the windows' sizes, allowing the viewer to relate very directly and physically to the image.

Sabine Hornig often combines photography with sculpture that reconstructs everyday elements of architecture which could all be parts taken from her photographs: doors, fixings, electricity boxes - these objects from the periphery of our perception are attributed with essential meaning and become the centre of attention.

Currently Sabine Hornig is represented with a major installation in the Project Space of the Museum of Modern Art in New York. The work consists of large-format transparencies which are inserted into a wall dissecting the space. They are displaying windows, some of which are also part of the exhibition "Fenster" (Windows), here at Galerie Barbara Thumm. In her New York installation Sabine Hornig pushes the limits of the interplay with the layers of perception and reflection to its virtuous extreme. (17 July - 8 September)