Final Forever. The series is composed of sublime moments from film and music matched and seamlessly looped infinitely. Videos one through four each exhibit a single selection from an Andrei Tarkovsky film and Velvet Underground loop. 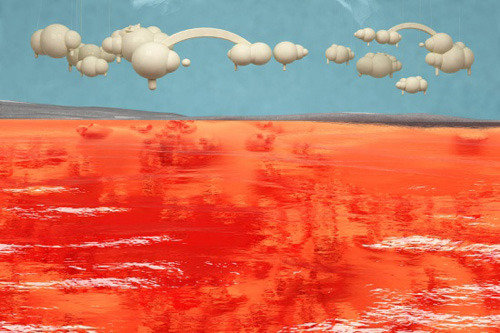 The Final Forever series is composed of sublime moments from film and music matched and seamlessly looped infinitely. Videos one through four each exhibit a single selection from an Andrei Tarkovsky film and Velvet Underground loop. Tarkovsky studied under Eisenstein’s cinematic legacy in Russia, heralded for pioneering montage and quick cuts to generate plot development and linear movement, but moved in quite an opposite direction, producing slow symbolic films with notoriously long shots.

I find these films execute a sort of emotional limit experience, between both portraiture and landscape, Tarkovsky investigates the sublime by letting simple life explain itself in front of the camera to the point of elucidation or ecstasy. Quite similar is the pop music of the Velvet Underground, which takes the precedents of fast paced happy rock and roll and pop music to deliver a more melancholic and mundane message in a profound way. Formally both Tarkovsky and the Velvet Underground deliver a plot line but slowly stray from it to the point where the aesthetics drive home an understanding beyond words.

In each film/song pairing I took the most dramatically sublime moment from a single film and song and combined them to further enhance their capitulation as an experiment to see if the beauty is lost to banality via repetition or retained and even heightened by prolonging the already long sublime moment. I found it to be the later, at least for me, and the ability to take something quite simple and turn it into something more representative of our condition between life and death, - or just beauty and decay - without altering the form, is what’s at the heart of my work. What becomes visible here and in a lot of my work is how meaningful time is.

Final Forever 1-4 will be exhibited as four separate week-long installations. Each week a single work will be projected in the space, beginning with Final Forever 1.

Sam Falls (b. 1984) lives and works in Los Angeles, CA. Recent solo shows include American Contemporary (New York), China Art Objects (Los Angeles), Marta Cervera (Madrid), and Ribordy Contemporary (Geneva). Writing on his work has appeared in Art in America, Artforum, Frieze, The New Yorker, The New York Times, and The Los Angeles Times. Among recent monographs are Life Size (Karma), Problems with Decomposition (Mörel), and Paint Paper Palms (Dashwood), with an upcoming book published by Printed Matter. He holds a BA from Reed College in Portland, Oregon, and an MFA from ICP-Bard in New York.