The Story of IXO, Gardar Eide Einarsson's first solo exhibition with the gallery, features a group of six new works, under several themes: minimal(ist) expression, refusal, and negation. Karl Haendel - for his solo exhibition ' The Competition Myth' - has developed a strategy to cope with the problem of coming up with ideas. 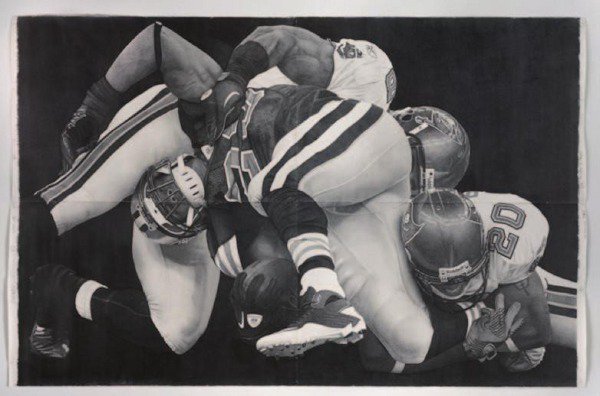 Yvon Lambert is pleased to announce The Story of IXO, Gardar Eide Einarsson’s first solo exhibition with the gallery.

Born in Norway, Gardar Eide Einarsson lives and works in New York and Tokyo. He deals with painting on canvas or wall painting, installations, photography, banners and flyers. All the pieces are based on found images or objects issued from the popular occidental culture such as graffiti, cartoons, skateboarding, tattoos and punk music. These works reflect identity-related tensions within the mass culture. However it is not merely a question to consider these as proper works of art. Above all, thanks to an elaborate display, the artist encourages us to question what would be the status of a Post-Modern art work as a critical and independent tool.

Most of the time, his black and white works keep playing with confusion and time lag, between signs issued of the social field and formal vocabulary, and, as stated Chus Martinez «Like a vernacular inter- pretation of the modernism».1

A group of six new works will be presented at Yvon Lambert Gallery. Originally they would be individual pieces but that come together as an installation made for the space, as is the way the artist usually proceed on a show. These works untitled The Story of IXO, come under several themes: minimal(ist) expression, refusal, and negation. Letters I, X and O (O as a stand in for zero/blankness/nothingness) are present in each work and tend to create the exhibition’s thread...

Art Minimal II is a monumental dyptich published in the first page of the exhibition’s eponymous catalogue «Art Minimal II – De la Surface au plan», presented to the CAPC of Bordeaux, 1986. In counterpoint, Let’s Find Out About Safety is now a real object: a double page from a children’s book found by the artist on which he overpainted.

The Devil’s Butcher Shop; the New Mexico Prison Uprising, is a painting based on a book cover relating to one of the most violent prisoner riots within the America History. By using a graphic treatment, the artist reveals a purely abstract picture in complete opposition to the reality. Thus, behind these typical modern abstract paintings, is hidden a reality more violent and largely offset by the artist.

On the floor, In Taxis, On the Phone, In Clubs and Bars, At Football Matches, At Home With Friends, com- posed of two light boxes, are based on an Irish republican army flyer urging people to converse carefully. It invites to the silence: «whatever you say, do not say anything «. The banner IXO / NO is inspired from the recent protest in Athens: the word OXI (“No” in greek) is viewed upside down.

Finally, a third sculpture, a bronze casting of a simple I-beam, refers to the minimalist vocabulary and the ready-made. The letter “I” made by the object profile is only the claim of “I”. The lenght size of the work, 184 cm, is equivalent to the artist’s eight.

1 - In Gardar Eide Einarsson, South of Heaven. Catalog published at the occasion of Frankfurter Kunstverein’s exhibition, 2007 and at the Centre d’Art Contemporain of Geneva, 2008.

I have developed a strategy to cope with the problem of coming up with ideas. What I like to do is read The New York Times and cut out headlines that are of interest. Well, not just of interest, they need to have poignancy; they need to reverberate a bit. I store the headlines in a box, or sometimes just a big envelope. Then, when it’s time to begin working on a new show, I reach in and pull out a handful.
Here goes. Let’s see what I’ve got:

How Ready Are We for Bioterrorism?–Fear of Frying–Shooter Slips on A Silencer–How China Can Defeat America–Gulf Oil Spill Is Bad, but How Bad?– Seeing Lincoln as a C.E.O.– I’m Sorry: The Scariest Words in Politics–Protest of Peace Prize for E.U. Turns Local–Hap piness May Come With Age, Study Says–At the Corner of Hope and Worry–The Ugly Side of the Southern Belle
It’s a mess. Much too broad. I’ll have to get rid of most of it. I keep:

Seeing Lincoln as a C.E.O. and The Ugly Side of the Southern Belle
Now I have something to work with. I put my hand back in and pull out a few more. I’m hunting now. I have a sense of what I want. Among the many that have to be tossed, I keep:

The Competition Myth and Financial Lessons From Sports Stars’ Mistakes
Something is developing. I pull more out. Too many; put some back. I order, I arrange. I come up with:

Death and Dying, the Animal Way 1
Slave Graves, Somewhere, Complicate a Walmart’s Path 2
Seeing Lincoln as a C.E.O. 3
In First Lady’s Roots, a Complex Path From Slavery 4
Black Women and Fat 5
The Ugly Side of the Southern Belle 6
She’s Plastic, Beautiful and Rules the World 7
Dueling Beauty Pageants Put Income Gap on View 8
Financial Lessons From Sports Stars’ Mistakes 9
The Cost of Football Glory 10
It Only Looks Dangerous 11
The Competition Myth 12

Sense out of noise. Kind of at least. Then I take a couple years to make some drawings around these themes and there you have my next show. And when I say my next show, I mean this show. The one that opens at Yvon Lambert Gallery on March 15th from 6 to 8 pm. I hope you can make it.

Karl Haendel is an artist who makes drawings, installations, films, and public projects. He received a BA from Brown University in 1998 and a MFA from the University of California, Los Angeles in 2003. He also studied at the Whitney Museum Independent Study Program and the Skowhegan School of Painting and Sculpture. Recent solo exhibitions include Locust Projects, Miami, The Box, Wexner Center for the Arts, Columbus, OH, and Lever House, New York, NY. His work has been included in recent group exhibitions at the Aspen Art Museum, Aspen, CO; the Rubell Family Collection, Miami, FL; the Astrup Fearnley Museum of Modern Art, Oslo, Norway; the Indianapolis Museum of Art, Indianapolis, IN; the Drawing Center, New York, NY; «Prospect II», New Orleans, LA; the Henry Art Gallery, Seattle, WA; the New Museum, New York, NY; the Fundación/Colección Jumex, Mexico; and the Guggenheim Museum, New York, NY.