The Raw and The Cooked. With photographs taken in 14 countries across Asia, this newest work is a continuation of his study of urbanization and globalization trends around the world. 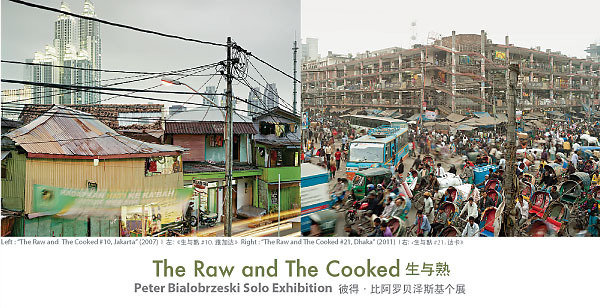 M97 Gallery is pleased to present "THE RAW AND THE COOKED" a solo exhibition of photography works by German artist Peter Bialobrzeski. This is the artist’s second solo exhibition at M97 Gallery.
“The Raw and the Cooked” (2011) is Bialobrzeski’s most recent body of work and continues on the footsteps of his interest in Asian cities and their vertiginous growth. With photographs taken in fourteen countries across Asia, this newest work is a continuation of his study of urbanization and globalization trends in different countries around the world, from the ingenuity of the slums of Manila in his series “Case Study Homes” (2008) to the interiors of humble homes in a suburb of Soweto in “Informal Arrangements” (2010). ”The Raw and the Cooked” exhibition at M97 presents a selection from these three bodies of work plus his award-winning “Heimat” series (2005), an homage to the beautiful natural landscape of his homeland, Germany.

In the series “The Raw and the Cooked” (2011), enigmatic photographs of glowing cityscapes present an ubiquitous contrast of humble old structures standing besides the shiny highrises that will ultimately replace them in a frenzied rhythm of accelerated growth. With his characteristic combination of photojournalism and artistic mastery, Bialobrzeski draws attention to the often wasteful nature of urban development and its persistent aim to destroy the old to give way to the new.

For his work in “Informal Arrangements” (2010), Bialobrzeski’s perpetual interest in human habitats took him to South Africa in 2009 to document the humbly decorated homes of the inhabitants of Kliptown, a suburb neighboring the über modern and over-budgeted soccer stadium built in Johannesburg for the FIFA World Cup. The artist carefully portrays the thrifty decorative skills of his subjects and the modest but endearing objects with which they fill their diminutive living spaces.

In “Case Study Homes” (2008), the subjects of the photographs are the exteriors of dwellings made out of discarded and found materials in the slums of Manila, again as a tribute to human ingenuity and the desire of owning a home and living with dignity even in the most impoverished of environments. Each photograph in this series offers a close-up of a proud ‘Frankenhome’ and its multiple textures and colors.
Finally, the “The Raw and the Cooked” exhibition at M97 also includes a selection of “Heimat” (2005), the series of landscapes completed upon the artist’s return to his native Germany after extensive travels in Asia. The spectacular landscapes of "Heimat", which is German for homeland, is Bialobrzeski’s contribution of an aesthetic full of beauty and meaning in contrast to the New German Photography movement of the time, and his purely documentary and unemotional images.

Peter Bialobrzeski (German, b. 1961) studied Politics and Sociology before he became a photographer for a local paper in his native Wolfsburg, Germany. He traveled extensively in Asia before he studied Photography and Editorial at University of Essen and at the London College of Printing (now University of the Arts London). After having worked as a photojournalist for almost 15 years and published his works worldwide, Peter started to focus more on personal projects. He interprets his work neither as documentary nor as art but defines it as cultural practice. In the last ten years, six monographs have been published about his works, "XXXholy" (2000), "Neon Tigers" (2004), "Heimat" (2005), "Lost in Transition" (2007), “Case Study Homes” (2008), “Paradise Now” (2009), “Informal Arrangements”(2010) and more recently “The Raw and the Cooked” (2011). His work has been exhibited in Europe, the United States, Asia, Africa, Australia and New Zealand. He has won prestigious awards including the Erich Salomon Award by the German Photographic Society in 2012 (EGPh), the World Press Photo Award in 2003 for his work about Asian Megacities and again in 2010 for his “Paradise Now” series. He also received the Otto Steinert Award in Germany in 2005. Other honors include being a member of the World Press Photo jury in 2007 and 2009 and a member of the Jury of the Fuji European Press awards in 2001 and 2002.