Popcornographic. A new series of 15 paintings all of which challenge conventional perceptions of what it is to be a woman and a Muslim in 21st-Century Kuwait. Alongside the exhibition, Ahmad Morshedloo will present an ambitious interactive octagonal installation commissioned by The Samawi Collection. 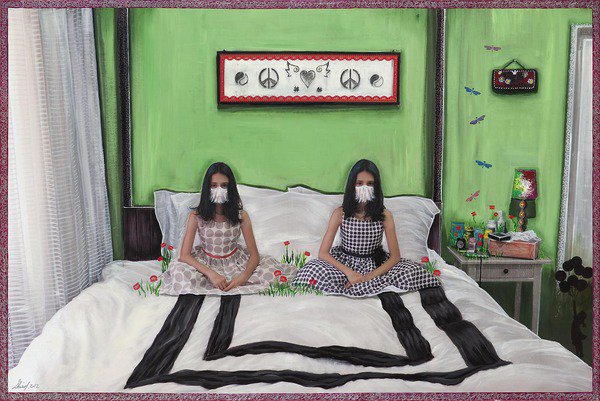 Ayyam Gallery Al Quoz, Dubai, is pleased to announce the solo exhibition "Popcornographic" by the Kuwaiti artist Shurooq Amin, a new series of 15 paintings all of which challenge conventional perceptions of what it is to be a woman and a Muslim in 21st-Century Kuwait. Having divorced and forged a career as a successful artist, Amin is compelled to address problems she herself has endured and survived.

Amin marries two aesthetics throughout this body of work. There is flesh on show suggesting freedom, but mouths are also gagged, alluding to oppression and a lack of freedom of speech. Sex and religious fervour also repeatedly collide and Amin precisely entwines them to comment on political and social conventions.

Rather than courting controversy, Amin invites her viewer to begin a conversation and urges that, though unorthodox, change must be embraced for people to coexist peacefully and with respect. There is a new cultural landscape through which the citizens of divided nations must navigate and Shurooq Amin takes the first steps here. She states, “I’m trying to confront the taboos that remain in our society, the disastrous ramifications of which are damaging us all.”

Amin believes that the obsession with the appearance and demeanour of women, the stigmas attached to adopting modern fashion and western aesthetic codes, results in significant destructive conflicts. She is aware that in the eyes of many she has adopted the role of ‘provocateur’, but she inverts this in order to reinforce her argument. These works are not profane, they are defiant; they are not rebellious, rather they seek to hold a mirror up to the establishment.

In her critique of social taboos, Amin is very aware of the importance of humour and this satirical approach is reflected in the show’s title. She explains, “It is not a real word, and therefore cannot be censored”. The idea of ‘subjective censorship’ is one that she returns to again and again, frequently alluding to famous and often banned novels in the titles of her works, such as "To Kill a Mocking Girl" and "A Tale of Two Muslims".

"Of Wives and Men" (2013) links to both the title of John Steinbeck’s "Of Mice and Men" and the novel’s content. Amin presents us with a young girl draped in white fabric and clasped possessively at the side of an older man wearing a tuxedo. This clear reference to the controversial practice of child marriage draws haunting parallels between the thrusting of child brides into an adult relationship they are not ready for and the exploitation of Steinbeck’s character Lennie, who is mentally-impaired and incapable of fully understanding the adult world that he inhabits.

Painting in acrylic, a synthesised and modern medium, Amin fills the frame with blocks of vivid colour. Intricate detail and collage invite the viewer to examine every inch of the picture, absorbing each layer. Partially obscured motifs and figures sport clothing that is almost, but not quite, traditional. In doing so, Amin ignites the debate once more. Handbags, iPads and patent leather stilettos bear exaggerated glossy highlights as if a flashbulb had popped near the surface of the canvas, turning the spotlight on her subjects.

Alongside the exhibition, Ahmad Morshedloo will present an ambitious interactive octagonal installation commissioned by The Samawi Collection, which presents the viewer with drawings showing a split view of a crowd of people, dividing heads and torsos from legs and feet. Separating these two layers is a mirrored section running the length of the drawings, reflecting the viewer’s own body and thereby absorbing them into the fragmented composition.

About Shurooq Amin
Renowned for her brave subject matter and use of taboo images, Kuwaiti artist Shurooq Amin explores the double standards, hypocrisy, and secret lives that exist beneath the surface of a conservative state. Her work illustrates the hidden, hedonistic world and dichotomy of the Arab man: religious preacher, weekend alcoholic; political activist, well-known party-animal; conservative father, secret playboy.
Born in Kuwait in 1967, Shurooq Amin lives and works in the country. Selected solo and group exhibitions include Lahd Gallery, London (2011); CAN, New York (2010); Tilal Gallery, Kuwait (2010); 11th International Cairo Art Biennale (2008). A retrospective of her work was recently featured in the biannual art journal, Contemporary Practices: Visual Arts from the Middle East.

About Ayyam Gallery
Founded by collectors and cousins Khaled and Hisham Samawi in Damascus in 2006, Ayyam Gallery sought to nurture Syria’s burgeoning and dynamic contemporary art scene through landmark non-profit initiatives such as the Shabab Ayyam Project, an incubator for emerging artists. Expansion into Beirut and Dubai enabled Ayyam Gallery to broaden its scope from the promotion of work by Syrian artists to those from the wider Middle East region. In doing so, Ayyam Gallery has established itself as one of the foremost exponents of Middle Eastern contemporary art to the international community.

Today, Ayyam Gallery is recognised as a leading cultural voice in the region, representing a roster of Arab and Iranian artists with an international profile and museum presence, such as Nadim Karam, Safwan Dahoul, Samia Halaby, Sadik Alfraji, Afshin Pirhashemi and Khaled Takreti. A number of non-commercial exhibitions, as well as the launch of Ayyam Publishing, Ayyam Editions, and The Young Collectors Auction, have further succeeded in showcasing the work of Middle Eastern artists with the aim of educating a wider audience about the art of this significant region. Ayyam Gallery Damascus currently functions as a studio and creative haven for artists who remain in the war-torn city. In January 2013, Ayyam Gallery launched a new space in London, with a second to open in Jeddah in late-February.