Video Works. The selected video works offer a multifaceted perspective on the artist's performance actions and present a document of his way of thinking in connection with his broader artistic work. These videos are not, then, merely a record of his performance actions, but contain their own aesthetic elements, as well. 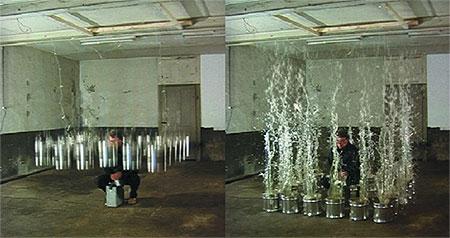 With the exhibition Video Works, Galerija Skuc honors thirty years of artistic creation by the Swiss artist Roman Signer (born 1938), who lives and works in St. Gallen. The selected video works offer a multifaceted perspective on the artist's performance actions and present a document of his way of thinking in connection with his broader artistic work. These videos are not, then, merely a record of his performance actions, but contain their own aesthetic elements, as well. For in their uniquely direct and raw treatment of the film material, they transcend their apparently documentary nature. The works presented at Galerija Skuc come from the period 1982-2002 and include the videos Frosch (Frog) 2001 and Eimer (Buckets) 2002, which have rarely been viewed in the international art context.

Roman Signer is an enigmatic figure in contemporary visual art who began compiling his unique opus in 1971. His work has been presented at some of most prominent events in contemporary art, including Dokumenta 8 in Kassel (1987) and Skulptur.Projekte in MÃ¼nster (1997), at many biennials, and at major museums. His work, which takes as its starting point the experience of conceptual art, is involved with spectacle, as well as with various poetic and quite artistic actions linked to experiments with body and the effects of devices of the artist's own invention. Signer's actions with explosives, miraculous sculptures, and various devices can for the most part be viewed, if not live, then through video recordings or digital media and photography. Here, however, one must highlight his expanded conception of sculpture. For in actions involving a specific time period, the things he makes use of alter their aggregate states. By introducing the dimension of time, along with cleverness and humor, and aided by technological and natural forces, Roman Signer, who begins by transforming shapes in space - a classic principle of sculpture - ends by transforming space itself.

This is Roman Signer's first solo presentation in Ljubljana, although in 1998 he participated in the group show Levada at Galerija Skuc as part of the artistic corporation Ingold Airlines. The exhibition of his video work is organized by Galerija Skuc in conjunction with the Embassy of Switzerland and Pro Helvetia - Arts Council of Switzerland. The curator for the exhibition is Gregor Podnar, an independent curator who has previously organized several exhibitions of Swiss art in Slovenia (Kapriola, 1996; Levada, 1998; and It's Comfy, 1999 - all at Galerija Skuc).

Supported by: Ministry of Culture of the Republic of Slovenia, Cultural Department of the City of Ljubljana, Pro Helvetia - Arts Council of Switzerland, Embassy of Switzerland in Ljubljana.

You are kindly invited to attend the opening of the exhibition on Wednesday, September 10th at 8 p.m. at Galerija Skuc.