The Other North. A new film developed from her research into archival footage of Northern Ireland during "The Troubles" period between the late 1960s and the mid-1990s. Also on view "The Selfish Act of Community". 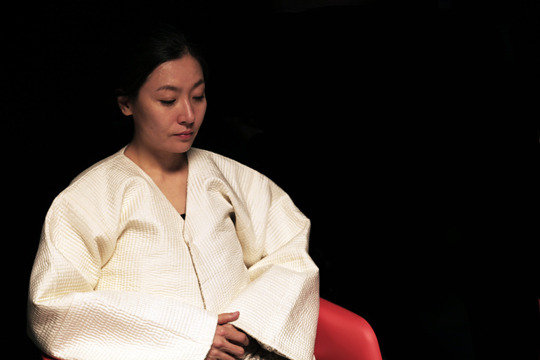 Artsonje Center and Centre for Contemporary Art (CCA) are pleased to announce Jesse Jones's solo exhibition, Jesse Jones: The Other North. In both locations, Jesse Jones presents a new film piece, The Other North (2013), commissioned by Artsonje Center and CCA. The work developed from her research into archival footage of Northern Ireland during the period referred to as "The Troubles" between the late 1960s and the mid-1990s.

Her focus is a film called The Steel Shutter, which documents a "conflict resolution therapy session" held by American psychologist Carl Rogers in the early 1970s with individuals from various political and socioeconomic backgrounds in Northern Ireland. Using transcripts of the therapy sessions as scripts to be performed by actors as verbatim theatre, Jones restages the event in Korea, re-enacting the film with eleven Korean actors. The Other North provides an opportunity to consider the effects of cultural, political, and national divisions, and their influence on individuals beyond geographical and political borders, through different historical and cultural perspectives.

In addition, the exhibitions will feature The Selfish Act of Community (2012), a film that examines the role of "the self" in social dynamics by re-enacting another of Roger's group therapy sessions, in this instance bringing together a cross-section of American citizens in 1968. This contemporary re-staging becomes a dramatization of the birth of the civil rights movement. Focusing particularly on how the ideas of the 1960s' counterculture on subjects such as gender, sexuality, race, and class have permeated the desires of the "silent majority," Jones' re-staging reveals the shifts in our understanding of feminism and politics over the past half-century.

Born in Dublin in 1978, Jesse Jones creates works that primarily take the form of film and video. She explores historical instances of communal culture that resonate with contemporary society and politics. The artist isolates forms and subjects, often through the use of Brechitan theatre techniques of estrangement, as a tool for both re-imagining and directly intervening in social discourse. She has recently had solo exhibitions at venues such as Spike Island, Bristol; the Hugh Lane Gallery, Dublin; and REDCAT, Los Angeles; as well as public work such as 12 Angry Films, a temporary drive-in cinema project in Dublin in 2005. She is currently working on a public art commission for the Convention Centre Dublin, commissioned by The OPW in conjunction with Create for 2013.

CCA fosters a wide range of artistic, curatorial, and critical practices through five collaborative and process-driven streams: research and production, exhibition-making, public programmes, publishing, and residencies. Embedded in the Cathedral Quarter within the historic city walls, CCA connects the region with itself and the rest of the world. CCA is generously supported by the Arts Council of Northern Ireland/The Lottery Fund, Northern Ireland Executive Supported by The Urban Regeneration Company Ilex, The Department for Social Development, UK City of Culture 2013, Caldwell & Robinson Solicitors, Arts & Business NI, and Crown Paints. Jesse Jones: The Other North has been additionally supported by the British Council Northern Ireland and the Henry Moore Foundation.