The works Chaimowicz has made for the exhibition include a two-speed staircase, a 1979 painted Folding screen and a wood marquetry screen, Dual chair day beds and some of his ceramics. This exhibition has been organised to coincide with the Design Historians Conference 'Sex Object'. 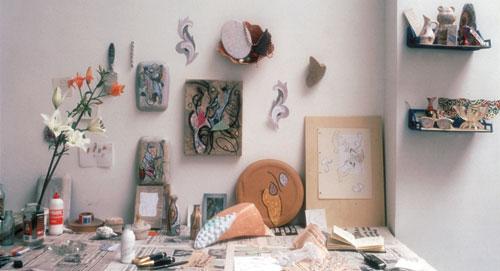 This room for Jean Cocteau will reflect Chaimowicz's own interiors in Approach Road, Camberwell and Dijon, and the room he made for the exhibition with Hodgkin, Caro and Hamilton at Liberty's in 1984. Marc's room was a place for people, two people, a place of romance.

The works Chaimowicz has made for the exhibition include a two-speed staircase, a 1979 painted Folding screen and a wood marquetry screen, Dual chair day beds and some of his ceramics. Bed ends from France, a bedspread, Eric Franc Glass Table from Geneva and Chaimowicz's fairground horse, wall drawings paying homage to Cocteau. The walls of the gallery will be painted and stencilled and the floor carpeted by Chaimowicz. Hanging on the wall, his malevolent coat hanger introduces us to his 'ambiguity'. He has a sense of discreet historical references to a French couturier's house for the exhibition and he decided to paint the metalwork outside the Norwich Gallery eau-de-nil, the colour of the bronze dome on Norwich School of Art.

In the early 1970s Chaimowicz was interested in the idea that art challenged the artist, and this had superseding the Duchamp's readymade challenge to the art object. He wrote about Performance Art for Studio International and his work was featured on the cover of the Performance Art issue. Chaimowicz studied at Camberwell School of Art under Frank Auerbach and Michael Andrews, and then went to study at the Slade School in the early 1970s, where Coldstream sympathised with his critique of painting and supported him in his need to find new ways to practice. His early performances were with Maggie Hambling. The idea of Performance and Film in his own work encouraged his romance with the work of Cocteau. He liked the radical spirit of Cocteau and also Cocteau's film and his sense of the theatrical and his multidisciplinary spirit. Ionesco defended Cocteau in 1957:

'He has been reproached for an impurity of style, his fairyland of cardboard stage sets. It is precisely his confetti that I love, his serpentine, his baroque fairground sphinxes. As everything is but a mirage and life is a fairground, it is not amiss that there should be sphinxes and there should be a kind of fair. Nothing expresses better than these itinerant and precarious festivities the precariousness of life, the fragility of beauty, evanescence.'

Chaimowicz has a story to tell. His mother served her apprenticeship with the couturiers Pacin in Paris and he has preserved, and will show in this exhibition, her apprenticeship book of sewn samples. Marc Camille Chamowicz worked as a consultant with Bauman weavers near Zurich and with silk manufacturers in Lyon. His mother talked about the world of the couturiers as something that survives through excellence, and she conveyed her memory of the period 1930 to 1960 to her son. His Father was Polish, he studied pure mathematics in Warsaw in the 1930s and worked with Marie Curie in Paris. The family came to England in 1954, and first settled in Stevenage new town. Chaimowicz has divided his adult life between England and France and his work articulates this movement.

He has been looking at photographs of Cocteau's interiors, his bedroom and the bedcovers. He went to the MuseÃ© Jean Cocteau in Menton as part of the preparation for this exhibition. Marcel Duchamp curated an exhibition by Jean Cocteau at Guggenheim Jeune in London in the 1930s. The surrealists tended to treat Cocteau as a dilettante. Cocteau broke taboos. He was queer but he was also an important establishment figure. He was a friend of Rudolf Nureyev, and he made drawings in the French Church in Soho for the wedding of Princess Margaret and Anthony Armstrong Jones. Chaimowicz brings Cocteau right up to date reminding us that Phil Glass wrote a score for Cocteau's La Belle et le Bete. Beauty and the Beast, the fairy story of the female and male parts of us all.

Marc Camille Chamowicz teaches both at Reading University and at the Ecole des Beaux Arts in Dijon. He is represented by Cabinet. Coincidentally there will be a major retrospective exhibition of Cocteau's work at Beaubourg this autumn.