Seep: two video projections, a model, a series of objects and associated images largely inspired by archival materials preserved in two institutions in the UK and Iran: the archive of British Petroleum (BP) and the Western collection of the Tehran Museum of Contemporary Art. Their projects and the magazine's editorial approach are closely linked, often founded on the historically and politically equivocal relationships between modernity and contemporary art. 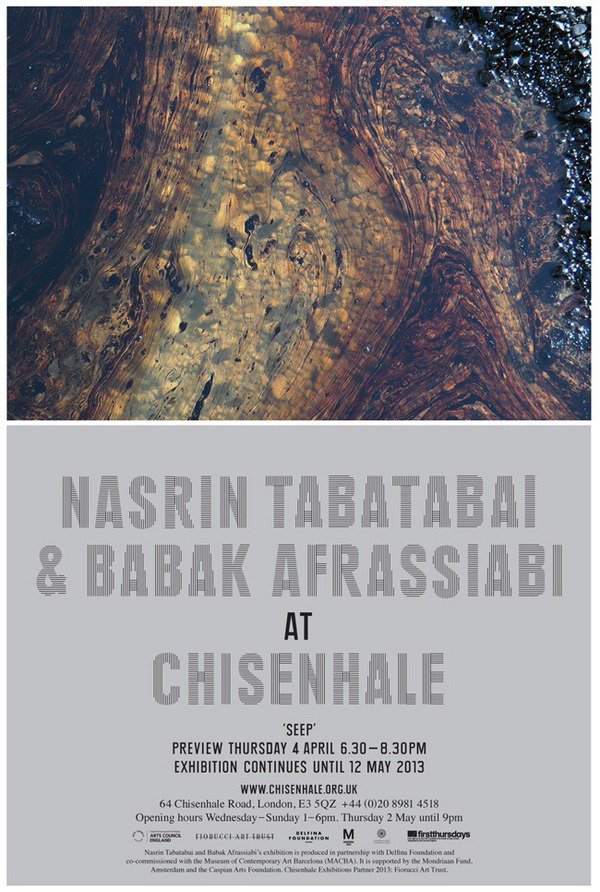 Chisenhale Gallery presents the first UK solo exhibition by Nasrin Tabatabai and Babak Afrassiabi. Seep is an installation of video projections, objects and prints. The exhibition is produced in partnership with Delfina Foundation and co-commissioned with the Museum of Contemporary Art of Barcelona (MACBA).

In 2011, Tabatabai and Afrassiabi began a series of works that take as their point of departure two 20th century archives in the UK and Iran. One produced by British Petroleum (BP – then known as the Anglo-Iranian Oil Company) documents the company’s operations in Iran beginning in 1908 and ending with the nationalisation of the oil industry in 1951; the other the collection of modern Western art acquired by the Tehran Museum of Contemporary Art during the late 1970s and withdrawn from public display for twenty years following the Islamic revolution in 1979. The artists’ approach to these archives considers their suspension, through discontinuation (in the case of the oil company) or removal (in the case of the museum).

Two video works in the exhibition relate to the British Petroleum archive. The first incorporates documents relating to Persian Story, the first Technicolor film commissioned by the Anglo Iranian Oil Company in 1948 to present the modernising effect of the oil industry on Iran. The film’s production coincided with political disputes around oil and, as a result, it became the last such film made by the company. Tabatabai and Afrassiabi’s video dramatises a letter from the archive in which the film’s director stresses the difficulties encountered in making the film and the ‘unfilmability’ of the subject matter. The artists use this correspondence to address what they describe as the ‘unfulfilled fiction’ of the British Petroleum archive. A second video in the installation presents the artists’ visit to south-west Iran – the geographical site that the BP archive registers.

Also included in the exhibition is a partial model of the Tehran Museum of Contemporary Art showing only the passages leading to the museum’s basement storage housing the collection. Following the withdrawal of the Western collection, the works – even when sporadically exhibited – have acquired a sense of non-presence. Tabatabai and Afrassiabi read this innate withdrawal as what has enabled the collection to enact its contemporaneity as an ‘Iranian’ collection, and thus, conversely, re-enter history. This presupposes a subtractive notion of archiving and archival representation, which underlies the artists’ proposed historiography in the installation.

Tabatabai and Afrassiabi have collaborated as Pages since 2004, producing joint projects and publishing a bilingual magazine – also called Pages – in Farsi and English. Their projects and the magazine’s editorial approach are closely linked, both described by the artists as ‘attempts in articulating the indecisive space between art and its historical condition.’ A forthcoming issue of Pages, titled Seep, will be published in Summer 2013.