1972-1977, les annees decisives. The selection of works on show features the artist returning to painting after a period of conceptual enquiry and instate the series as central to his approach. 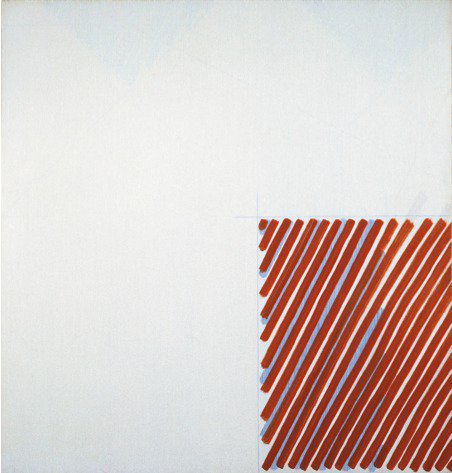 Twenty years after the artist’s death, Galerie Nathalie Obadia is honoured to be presenting a selection of Martin Barré’s works from the 1970s. Exhibited here for the first time, they show the artist returning to painting after a period of conceptual enquiry and instate the series as central to his approach.

A major figure in the history of abstraction, Barré questions the fundamental elements of painting: format, gesture, series, hanging. “I do not paint to convey moods,” he told an interviewer in 1977. “I use a rule, a rule of play, and I transgress it when the painting so requires.”*

This historical exhibition continues the rediscovery of Barré’s work undertaken by the Obadia gallery since 2006 and extends the 2010 exhibition, 91, which featured a complete series of paintings made for the first Biennale d’Art Contemporain in Lyon and the “Homage to Martin Barré” orchestrated in summer 2006 by Jean-Pierre Criqui, where Barré’s paintings were hung alongside works by painters such as Robert Mangold, On Kawara, Christian Bonnefoi, Christopher Wool, and Pascal Pinaud.

Assembling a significant selection of pieces made by Barré between 1972 and 1977, the show follows the key stages during what was a decisive period for his art, one that saw him adopt the serial approach. From now on, each painting would be generated by the same principle, relating it to the others. Each painting is like the fragment of a greater whole, part of a modular grid of which we can only see the details.

Seriality was central to Barré’s creative process as of 1972, which is when he quite literally carried out the same operations on all the canvases within a given ensemble during a succession of “sessions” – the “grid session, hatching session, covering session.” A veil of white was also applied over the surface of the canvas at the end of the gridding and hatching stages in a layering of transparencies made possible by the use of fast-drying acrylic paint.

Marking a return to painting, but also to the use of the brush, which he had abandoned in favour of the paint straight from the tube and, later, the spray can, in his effort to achieve a kind of immediacy, these series from the mid-70s (1972–1977) also evince a return to colour (given up in 1963 in favour of matt black spray paint). Initially limited to brown ("72-73"), the range of colours spread in the course of subsequent series to blue, ochres, yellow and orange, although these coloured elements were sometimes no more than traces beneath the veil of white.

A set of sixteen paintings is on show here in a linear hanging which uses the gallery spaces to follow the methodical sequence of the series, with each one having its own dedicated room: three paintings from “72-73”; four paintings from “73-74”; six paintings from “75-76” and three paintings from the final series “76-77”. As the five series unfold – one a year between 1972 and 1977 (only “74-75” does not feature in the exhibition), we can observe their increasing pictorial complexity.

The form-ground opposition recedes. The space determined by the line often seems to continue beyond the canvas. Traced in pencil using a ruler, the grid contrasts with the coloured stripes, painted freehand, as they fill different zones. In some of the pictures this covering extends over every area (75-76-D-157x145); in others it delimits the contours of a zone left empty, which is then put forward as a negative figure (75-76-A-157x145).

This play of repetitions and variations in the inscription of the hatching is redoubled by the effect due to the variations in the angle at which the grid meets the sides of the picture object. This device has its counterpart in the system determining the choice of formats, vertically extended false squares whose dimensions now appear in the titles of the works for the first time.

After the vertiginous “great emptiness” evoked by Yve-Alain Bois with regard to the tube and spray paintings of the 1960s, the paintings of the 1970s confront us with an “over-fullness,” an overdetermination that is just as disconcerting for the viewer, who is invited to “stray somewhere in the labyrinth of painting.”**

In partnership with Éditions Dilecta and the art critics Ann Hindry and Paul Galvez, a 72-page catalogue will be published on the occasion of the exhibition.

In order to expand the discussion of Barré’s work, a round table will be organised at the Pompidou Centre on 16 May (7pm) with the authors Ann Hindry and Paul Galvez, Jean-Pierre Criqui, editor of Les Cahiers du Mnam, and Michel Gauthier, keeper of contemporary collections at the Pompidou Centre.

Born in Nantes en 1924, Martin Barré died in 1993, leaving a body of work whose diversity and intelligence assure him of an eminent place in the history of the art of the second half of the 20th century.