Birth of a Museum

The first large-scale presentation of part of the collection. The exhibition proposes a singular and original rereading of the history of art and is built around several key artistic and aesthetic questions core to the identity of the new museum: universalism, the comparison between art works from great civilisations from the most ancient times to the contemporary and the multidisciplinary nature of artistic creation. 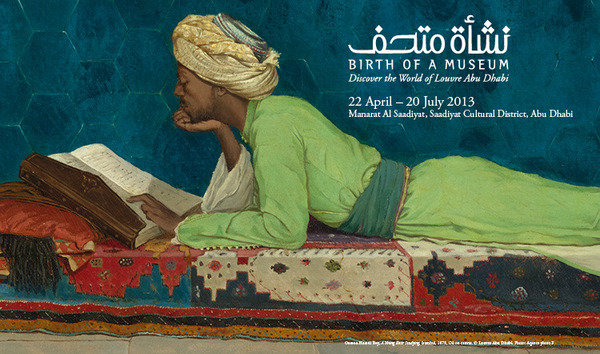 Louvre Abu Dhabi will open its next exhibition on 22 April (running until 20 July) on Saadiyat Island showcasing important works of art from the Louvre Abu Dhabi permanent collection, some of which have never been seen or revealed before.

Almost 130 art works will be shown in Manarat Al Saadiyat, Saadiyat Cultural District's art and exhibition centre, and will give visitors insight into the museum's narrative and collection ahead of its opening in 2015.

Pablo Picasso's never before exhibited work Portrait of a Lady is one of the art works in Louvre Abu Dhabi's permanent collection and included in the Birth of a Museum exhibition. The papier collé, a type of collage using glued paper cut-outs is, according to the hypothesis of John Richardson, a portrait of famous socialite and fashion muse Natalie Paley, granddaughter of Tsar Alexander II of Russia and wife of the couturier Lucien Lelong. A renowned model in her day, she was well-connected in fashionable Parisian circles. Picasso may have used photographs as a source, as he did for many other portraits, to capture her oval face, fine features, and slim silhouette.

Commenting on the latest milestone for the Saadiyat Cultural District, HE Sheikh Sultan bin Tahnoon Al Nahyan, Chairman of Abu Dhabi Tourism & Culture Authority (TCA Abu Dhabi) said: "The aim of this exhibition is to evoke the Louvre Abu Dhabi's ambiance and aesthetics, and to begin to tell the story of the birth of this museum. The whole exhibition experience is another chance for visitors from the United Arab Emirates and abroad, to see the remarkable art works in the Louvre Abu Dhabi's permanent collection as we prepare for the museum's opening. Even before opening its doors, Louvre Abu Dhabi is setting its precedent as a place of cross-cultural dialogue and exchange."

Born of an agreement between the governments of Abu Dhabi and France, Louvre Abu Dhabi will display art, manuscripts and objects of historical, cultural and sociological significance. The museum and its growing permanent collection is owned by the Government of Abu Dhabi. Spanning millennia, the items on display will originate from societies and cultures all over the world, but universal themes and common influences will be highlighted to illustrate similarities arising from shared human experience transcending geography, nationality and history.

Like the Louvre Abu Dhabi, the exhibition proposes a singular and original rereading of the history of art and is built around several key artistic and aesthetic questions core to the identity of the new museum: universalism, the comparison between art works from great civilisations from the most ancient times to the contemporary and the multidisciplinary nature of artistic creation. It will also explore the status of the work of art, through universal themes in the exhibition such as questions of the Figure and the Sacred.

Art works include one of the finest examples of a standing Bactrian Princess from the end of the 3rd millennium BCE; a Middle-Eastern gold bracelet with a lion's head approximately 3000 years-old; a painting titled The Good Samaritan by Jacob Jordaens, one of the major Flemish painters from the 17th century and a painting by Oman Hemdy Bey from 1878, titled A Young Emir Studying; a selection of the James Ivory miniature collection includes fine examples of the chivalry ideals of the Rajputs schools depicted and an evolving dialogue between East and West culminates at the end of the exhibition in a cycle of nine canvases by contemporary artist Cy Twombly.

As with all exhibitions organised in preparation for the museums in the Saadiyat Cultural District, it will be supported by a diverse Cultural Programme of talks, tours and workshops and a book detailing a significant part of the collection acquired to date will also be published and launched in April.

The first talk, which will take place on 22 April at Manarat Al Saadiyat, titled "Louvre Abu Dhabi, a Museum in the Making," features Hissa Al Dhaheri, Project Manager of Louvre Abu Dhabi, TCA Abu Dhabi and Laurence des Cars, Curatorial Director of the Agence France-Muséums, providing audiences an insight into the singular and original rereading of the history of artistic creation which will make Louvre Abu Dhabi unique. This will be followed by two others in May and June, which form part of the second Louvre Talking Art Series.

Henri Loyrette, President-Director of the Louvre Museum, said: "This exhibition is a major milestone in the realisation of the Louvre Abu Dhabi in so far as it unveils the admirable and high quality of the art works that will reflect the heart of the future Museum's permanent collection. Moreover, this exhibition will embody remarkably the essence of the forthcoming birth of this universal museum. The exhibition will travel from Abu Dhabi to Paris to be presented at the Louvre in Paris in October 2013."