A concept about painting. Part III - Via Het Virtuele. The third part of the project - focusing on painting from the 1960s until today and presenting works from the S.M.A.K's collection - is developed in close collaboration with Nicola Setari and features works by Fabrice Hyber, Gerhard Richter, Daniel Buren, Carsten Nicolai, Matteo Fato, Alice Tomaselli and others. 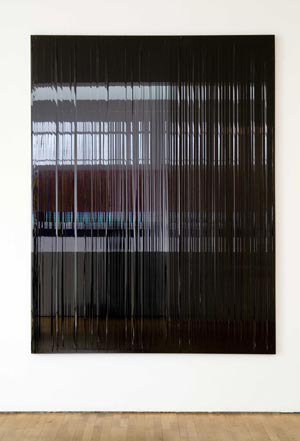 As from January 2013 Cultuurcentrum Strombeek and the Museum of Contemporary Art, S.M.A.K. in Ghent are engaged in a unique collaboration. Under the name “Museumcultuur Strombeek / Gent” Cultuurcentrum Strombeek will develop a series of exhibitions that take the collection of S.M.A.K. - which comprises over 2,000 works from the past 60 years - as a point of departure to explore a number of themes. The intention is to realize two projects a year (2013- 2016), each comprising two or three parts. Themes in 2013 are: a subjective overview of painting from the 1960s till today (spring 2013) and a project on the developments in the art of sculpture linked to the evolutions in the field of dance (winter 2013). The exhibitions in 2014 will be dedicated to the changing image of man and its manifestation in the visual arts (spring 2014) and to the Italian art movement Arte Povera, which will be regarded in the light of a younger generation of artists involved with ecology (winter 2014).

The first exhibition series, “About Waves", takes place from January 2013 until June . It is a three- part project focusing on painting from the 1960s until today. The first part, “Het Ding”, opened on 11 January 2013. It focuses on painting from the 1960s and the beginning of the 1970s, a period in which a number of painters began to explore the fundamental, material aspects of painting. The exhibition features works by Gerhard Richter, Andy Warhol, Robert Ryman, Sol LeWitt, Daniel Buren, Lawrence Weiner, Raoul De Keyser, André Beullens, Jan Schoonhoven, Willy De Sauter, Philippe Van Snick and Walter Swennen. The exhibition is on view at Cc Strombeek until 7 February 2013.

The second part, “Re-figuratie” opens on 22 February 2013 and will concentrate on the developments at the end of the 1970s and 1980s, a period in which figurative painting reconquered its place in the art world. The exhibition will bring together works from the (then) older generation of painters such as Georg Baselitz, A.R. Penck and Bernd Koberling and the (then) younger generation of painters like Rainer Fetting and Elvira Bach, which were often mentioned in one and the same breath. Besides to the “wild", "savage” work of the young Germans and that of the Italian “Transavanguardia”, which was inspired by antique mythology, the exhibition will also pay attention to the leading figures of the then successful Belgian art scene with works by Philippe Vandenberg, Marc Maet and Willy Van Sompel among others. The wayward oeuvre of Michael Krebber and the Dutch artist René Daniels will receive special attention in this exhibition; and, of course, the work of Gerhard Richter, Raoul De Keyser and Walter Swennen will remain a central point of focus, as is the case in the whole "About Waves" exhibition series. Like the first exhibition, this second part will show works from the S.M.A.K.-collection added to/with works from several private collections.

The third part, “Via het Virtuele”, which will open on 22 April 2013, is developed in close collaboration with Nicola Setari and will investigate the influence of the “virtual" in the field of painting since the 90s.

Programme around the exhibition: