The tools Luper suitcases. Luper in Ghent. The majority of the public is familiar with Peter Greenaway (Newport, England, 1942) as a film director. However, after an artistic education where he learned the language of draughtsmanship and painting, he first embarked upon a career as an artist. For the film director drawing and painting remain essential to express himself, as in his view these are the most radical ways to make images. 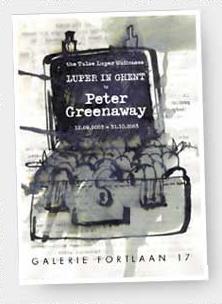 The majority of the public is familiar with Peter Greenaway (Newport, England, 1942) as a film director. However, after an artistic education where he learned the language of draughtsmanship and painting, he first embarked upon a career as an artist. For the film director drawing and painting remain essential to express himself, as in his view these are the most radical ways to make images. His plastic work usually precedes his films and is inseparably entwined with it, as the themes and composition of the films refer back to it. His films also include numerous references to plastic arts and other forms of artistic expression, like literature and music. In the early nineties he started to make large-scale exhibitions, choosing from a variety of objects and his own works of art. With these he drew considerable attention.

'The first truly remembered instance of my wishing to be a painter was in 1952. On a Friday afternoon. In primary school. I was ten years old. The form-master's favourite subject was arithmetic.
His name was Hardy - yellow teeth, white hair, grey waistcoat, a grey austere man, an autodidact.
I did not, at that time, understand his Jude nickname. With an unexpected magnaminity - perhaps the thought of the summer weekend ahead released him from his characteristic strictness - he gave a lesson in perspective.
If challenged by the headmaster with an accusation of frivolity, he could say that perspective was seriously related to geometry and mathematics.
Jude Hardy drew simple, straight, converging and diverging lines on the blackboard.
In white chalk. And the lines fitted a system of logic, that, even at that young age, I found irresistible.
The visual world could be reconstructed in association with a systematic code.
I would need afternoon summer sunlight catching chalk dust in the air to fully recall the atmosphere, but I can still remember that blackboard with its street of houses with sloping roofs leading to a single vanishing point.The world could apparently disappear into a single vanishing point on a blackboard. I searched the blackboard for secret black holes.
It had became a playground of some mystery. It did not have to be a dreary instruction manual or a location of public humiliation .... .'

This exhibition of exactly fifty paintings, directly and indirectly, recalls something of that firstexcitement about my discovery of the possibilities of draughtsmanship and painting on a school blackboard.
The vocabulary now far exceeds the drawing of simple chalk lines on black, but that black background that suggested emptiness, outer space and the void on which to
legitimately spread encyclopaedic information of all kinds, as image, text, chart, plan, graph, map and diagram, remains very strong in my memory and imagination.
You could say it is the very opposite of the white film screen, or is the film screen in negative, and everyone knows that photographically you have to have a negative before you can have a positive.
I have always been fascinated by the map, a communication in three tenses - you can see where you have been, you can see where you are, and you can see where you can go; landscape codified with a range of conventional signs, comprehensible colour-codings, ingenious ways to represent depths and elevations. There are maps on these blackboards.

After the fully fleshed, highly figurative, representational, mimetic and illusionistic world of the film vocabulary, it is a relief to be
schematic, economic, stripped back and stripped down, to utilise the didactic purpose and simplifications of the chart, the plan and the diagram. There are charts, plans and diagrams on these blackboards.
The standing alone of the image in post-Renaissance Western art is in relative terms, historically a rarity not a commonplace. The combination of image and text as a dual communication is more familiar.

Text and image combined is a regular feature of Oriental Art, of Egyptian Art, of Byzantine Art, of Muslim Art, of Northern European pre-Renaissance painting, the manufacture of illuminated manuscripts of all kinds, and now full circle, of the advertising, book-publishing and televisual worlds. Derrida famously and wittily said that 'the image always has the last word', but the word itself is an image. There are words and texts and numbers alongside the images on these blackboards.

The blackboard is a place and space for all these means of communication. It is legitimate that all these means of communication should find their echo in these paintings.
And legitimate that the blackboard itself as a physical object is recognised. All these paintings have definable edges, in many cases fully emphasised by margins and borders that demonstrate and stress the ubiquity of the rectangular frame. No part of any painting is therefore hidden under a frame's edge and can therefore never partake in any looking through-a-window-onto-the-world characteristic.

If such comments define the background agenda for this exhibition in terms of strategies and structures, what of the subject matter, or the so-called content? Well - the self-conscious strategies are themselves fully part of the content, especially as regards what one would expect to see written, drawn and recorded on a blackboard. Here are simple numerical exercises, and the teaching of the alphabet from suggestions of handwriting exercises to the exhibition of the sentence 'The quick brown fox jumps over the lazy dog', as a sentence in English that contains all the alphabet's letters at least once. Here are also visual meditations on the Atomic Table up until number 92, the atomic number of Uranium, and various simple graph cross-referencing devices, along with the fascination of number squares. There is a gentle obsession with the number seven, a most ubiquitous number, holding together days, ages of man, colours of the rainbow, musical scales, oceans and continents and wonders of the world, being the largest number recognisable to the mind's eye without actually counting, with the suggestion also that apparently waves, snoring and menstrual cycles take close cognizance of the number. And there is much hint of water, which photographically and figuratively has always held my close attention.

All these fascinations are shared by past and other present projects, but what is fresh is a celebratory acknowledgement of a new living environment in Holland and in Amsterdam which has quickened an old interest in de Vries, Saenredam and Vermeer. I suppose Vermeer and Uranium - a curious duo - secretly occupy the centre of this particular exhibition. Vermeer is the subject of a new opera called Writing to Vermeer and Uranium figures in a new film project called The Tulse Luper Suitcase. Pushing and pulling, thinking and pondering these stage and film projects sets up all manner of new issues, which circulate through the images and the ideas associated with the images.
But the title of the exhibition is Blackboard Paintings.
A Blackboard was an exhibit in the Vienna Exhibition of 100 Objects to Represent the World. It was Item number 37 in the travelling opera of the same name. Opera stage and exhibition catalogue made reference to Einstein, Hawking and Beuys' love of blackboards. On the opera stage is a still projected from a Laurel and Hardy film where a chastened Hardy - we are back again to a namesake of that first maths-master who used the blackboard for magical perspective - is writing on a school blackboard.

'I must not be a naughty boy'
one hundred times .
Peter Greenaway
August 1999