For over 40 years, Michel Auder has been portraying the world around him (near or far, intimate or anonymous) in a decidedly subjective fashion based on his own life and experience. The extensive programme of film sessions presented in the auditorium covers other aspects of his video work. Rui Toscano - Sound Sculptures 1994-2013: the artist creates frameworks for experience and meaning based on the crossover between simple, minimal forms and sound events through which reality and representation are able to burst forth. 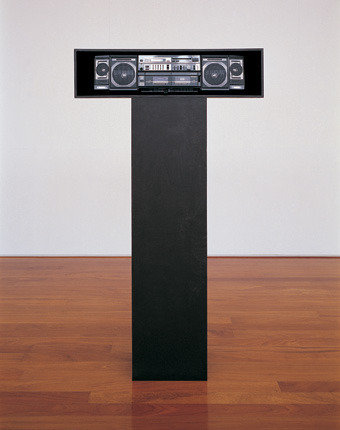 In an interview that he gave in 1994, Michel Auder (b. 1945; Soissons, France) stated: "What else is there to talk about but life? I don't know what other subjects there are—I'm not an abstract person. I'm a reality person. So I formulate. And reformulate. And formulate it again in some way that I think exposes my personal views of this world we live in."

For over forty years, Michel Auder has been portraying the world around him (near or far, intimate or anonymous) in a decidedly subjective fashion based on his own life and experience. After moving from Paris to New York in 1970, he spent the 1970s and 1980s constantly filming those he lived and socialised with, including not only his first wife (Viva, Andy Warhol's favourite actress) and their daughter, but also Warhol himself and various people who gravitated around him and the Factory, as well as other people from New York's artistic and cultural circles. He used this abundant material (often many years later) to make films where he developed his own very personal documentary approach, including several touching portraits (of the actor and poet Taylor Mead, the painter Alice Neel, or the artist Cindy Sherman, to whom he was married from 1983 to 1999).

Since the end of the 1970s, Michel Auder's video work has branched out in multiple directions, including fictional films conceived in collaboration with some of his friends and acquaintances, films with a highly autobiographical slant in which fiction and documentary are blended together, compositions based on the sampling and manipulation of television images, or videos based on a loose association of images, involving modes of visual thinking that frequently come very close to poetry. His exhibition is rooted in works of this latter type; the extensive programme of film sessions presented in the auditorium covers other aspects of his video work.

In June, Kunsthalle Basel will present another solo exhibition of Michel Auder, curated by Adam Szymczyk.
The two institutions are collaborating in the conception and production of an extensive publication on the work of Michel Auder.

In 1994, Rui Toscano (b. 1970, Lisbon) produced a sound sculpture that was to prove decisive for the development of his artistic practice over the following years. Bricks are Heavy (as it was called) marked the beginning of a long line of works in which the artist simultaneously uses the radio cassette player as a sculptural element and as a sound amplification system.

The reference to rock culture, and thus to a certain youth culture that the artist shared in, was unmistakably present in the first two works that he made of this kind: Bricks are Heavy and (...They Say We're Generation X But I Say We're Generation Fuck You!), which dates from 1995. Yet what has endured in all of his sound sculptures—something that few people actually noted in the 1990s—is the remarkable reactivation and subversion of the characteristic formal language of minimalist sculpture. Rui Toscano creates frameworks for experience and meaning based on the crossover between simple, minimal forms and sound events through which reality and representation are able to burst forth. Frequently allied to this discursive aspect is the exploration of a self-referential dimension of the work of art.

By the mid-1990s, the radio cassette player was already an obsolete object that was gradually beginning to disappear: although this fact made the process increasingly difficult, it did not prevent the development of this body of works, as is proved by two new sound sculptures, one of which was first planned ten years ago.