BALTIC presents last work by Jane and Louise Wilson, a new multi-screen film installation and an exhibition by Berlin-based artist Eva Grubinger concluding her residency at the gallery 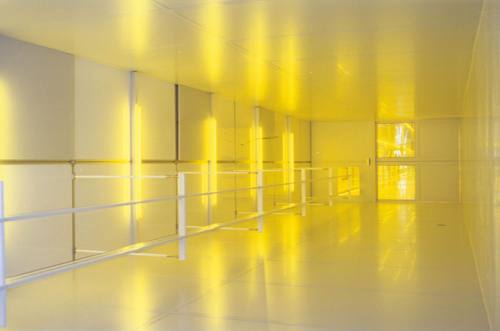 JANE AND LOUISE WILSON
A Free and Anonymous Monument

Newcastle-born artists Jane and Louise Wilson return to the North East to present a major new exhibition at BALTIC, from 13 September â€“ 30 November 2003. The artists' most ambitious work to date, and co-commissioned by BALTIC and Film and Video Umbrella, A Free and Anonymous Monument is a new multi-screen film installation presented in Level 3 art space. The work examines the process of re-invention undergone by former industrial areas in North East England through the use of architecture and its automated industry.

A significant departure from the Wilson's previous work, A Free and Anonymous Monument investigates a series of regional sites connected through a common theme: all the locations are key areas of redevelopment and regeneration in the North East of England. The sites include the 60's Gateshead Carpark, made notorious by its role in the gangland classic â€˜Get Carter', the Apollo Pavilion in Peterlee designed in 1958 by artist Victor Pasmore and an offshore oil-rig. The installation, a walk-through experience, presents large-scale multi-sided screens which can be viewed from both inside and outside the piece, configured to reference the Pasmore pavilion and the exhibition with Pasmore and Richard Hamilton, "Environmental Painting" 1956 (suspended construction) at the Hatton Gallery, Newcastle upon Tyne. The artists worked in consultation with architects Pip Horn and Duncan Mcleod, to realise the design of the installation.

Jane and Louise Wilson's work typically examines the psychology and architecture of certain buildings and spaces; the artists work together to produce video installations and photographs which explore relationships between people and architectural space - particularly those which are concealed, secret or somehow forgotten. Their work often explores uncomfortable and complex spaces, represents traces of activity or occupation and alludes to a feeling of disintegration and abandonment as well and a sense of past occupation or of current absence.

Jane and Louise Wilson will be giving a talk at BALTIC in conjunction with the exhibition.

Concluding her residency at BALTIC, Dark Matter, is an exhibition by Berlin-based artist Eva Grubinger, who presents a new body of work inspired by the notion of anxiety as a driving force in modern society.

The centrepiece of the exhibition is a giant black headset, apparently dropped by an invisible hand. Approaching the sculpture one can hear subtle fragments of telephone conversations and electronic noise. A long 'window' of black shining opaque glass lines the end wall of the space, reflecting the silhouettes of the headset and viewers. Without revealing anything, both objects hint at an unseen, but omnipresent and surveilling other.

Turning left towards the second room, a control tower comes into view, followed by a cooling tower and a nuclear reactor, and a tower block. All black and slightly larger than human scale, these objects - replicas of familiar forms of industrial, military and urban architecture - radiate inconsistent signals: their opaque, light-absorbing, partially mirrored surfaces obscure the activities inside, while at the same time suggesting absolute transparency.

This disturbing feeling of seeing or hearing without fully comprehending, this suspicion that some bits of information - the most important ones - are hidden somewhere, evokes a feeling of paranoia. In a media-driven culture, this paranoid condition becomes permanent and architecture, which used to be a metaphor for protection and safety, becomes haunted.

Sites like the nuclear reactors of Sellafield and the U.S. listening posts in Menwith Hill, North Yorkshire, are turned into touchstones of a newly fostered fear - not least since 11 September 2001. Money is pumped into the surveillance and security industry at the expense of social security and education systems and for many, the rapidly growing call centre industry remains one of the few sectors that offers jobs - albeit poorly paid and angst-ridden ones.

Eva Grubinger creates installations involving video, sound and sculpture and has also developed projects for the internet, including Computer Aided Curating, 1994, Netzbikini, 1995, www.thing.at/netzbikini and Caught In Flux: flexibel.org, www.flexibel.org. In recent exhibitions at Charlottenborg Exhibition Hall, Copenhagen, Deichtorhallen Hamburg, and KIASMA Museum of Contemporary Art, Helsinki, Grubinger has been exploring the ways in which technology is used ideologically. Like the astronomical 'dark matter' from which the exhibition takes its title, the sculptural scenario hints at covert forces and systems at work in society, and questions our role as unwitting participants within them.

Image: Jane and Louise Wilson, A Free and Anonymous Monument