Out Loud. Paleni's paintings investigate imaginary states of mind and the incessantly changing violence of life. On show also a video, an endless animation realized completely in watercolor paint. 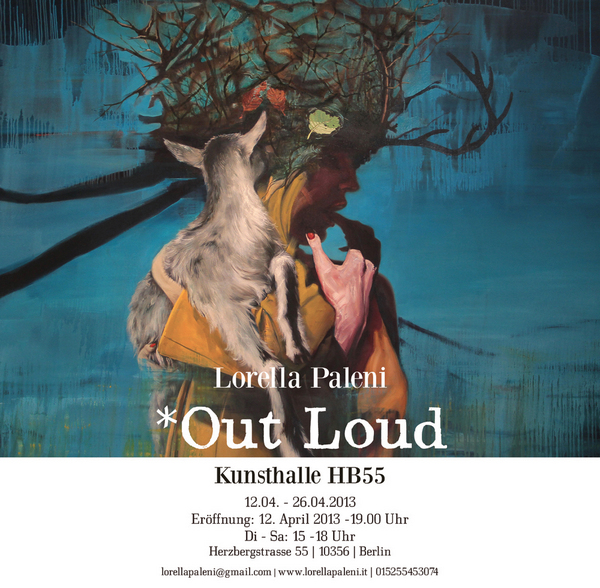 Out loud is the first solo show in Germany of the artist Lorella Paleni.
The exhibition features a new group of paintings realized in the last year between New York and Berlin.

Paleni’s paintings investigate imaginary states of mind and the incessantly changing violence of life. The human condition is pointed out through the attendance of animal presences and organic transformations inside the painting matter.
The painting surface is the site of occurrence of events, chances and mistakes that torture the pictures during their realization.
Paleni defies convention in her work trough construction of parallel, timeless worlds. Transcenden- ce of time is critical to her research and process, the final result avoid a narrative explanation of the image in favor of an incessant flow. The elements of the images get confused and melted together in this without-time space.

“Obviously, there is neither before nor after, in the works of Lorella Paleni. Rather, there is a "for" critical moment in which the memories resurface and dreams come to life. It is a kind of mental chaos, a collection of sensory experiences and no man's land of logic where the transparency overlays and everything becomes true and false simultaneously.”
Says Julien Foulatier in a recent article on Boumbang French magazine.

The show will also include Paleni’s first video projection, the work consists of an endless animation realized completely in watercolor paint. This work is inspired by the figure of the river as metaphor of life and time: “The river is everywhere at the same time, at the source and at the mouth...in the ocean and in the mountains, everywhere, and that the present only exists for it, not the shadow of the past, nor the shadow of the future [...] Nothing was, nothing will be, everything has reality and presence.”
(Siddhartha, Hermann Hesse)

Lorella Paleni earned a BFA in Painting at the Academy of Fine Arts in Venice in 2010. After moving to New York City in 2011, Lorella studied in various summer study programs, including Columbia University. Before her session at Columbia, she was an artist in residence at the Was- saic project. Lorella's work has won numerous awards and nominations, including the Cut & Paste Pick prize presented by Artists Wanted, New York. Paleni currently lives and works in Berlin.