In every dream home a heartache. For his exhibition Collins and his production initiative Shady Lane Productions have realised a new work in collaboration with guests of Gulliver, a survival station for the homeless located in the centre of Cologne. Other works are spawns of the same unholy alliance between pop and politics. Curated by Anna Brohm. 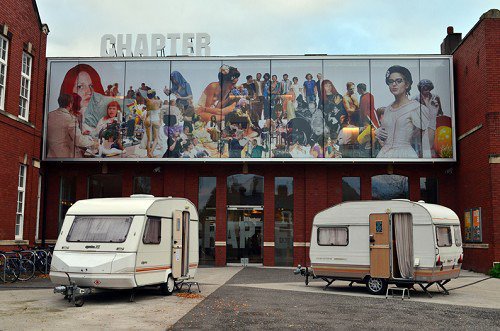 Having grown up in the North of England in the 70s and 80s, Phil Collins has always had a passionate interest in music, television and popular culture. In his films, photographs and live events, he investigates the relationship between the camera and its subjects, and the affective potential of various recording media in their everyday context. Collins' practice is focused on close engagement with people and communities, which over the years have included, amongst others, disco-dancing Palestinians, fans of The Smiths over three continents, and teachers of Marxism-Leninism in the former DDR. The projects are often announced through newspaper ads and poster campaigns, or take the form of castings and press conferences, so as to provide a wide-reaching platform for encounters predicated on high emotional stakes. Throughout, Collins' work reflects his commitment to myriad forms of experience across the social spectrum, and his belief in the power of intimacy and desire within the public sphere.

For his exhibition at the Museum Ludwig, Collins and his production initiative Shady Lane Productions have realised my heart's in my hand, and my hand is pierced, and my hand's in the bag, and the bag is shut, and my heart is caught, a new work in collaboration with guests of GULLIVER, a survival station for the homeless located in the centre of Cologne. There, Collins installed a phone booth with a free line that anyone could use for unlimited international calls on the agreement that the conversations were anonymously recorded. The selected material was then posted to a group of international musicians, serving as the starting point for original new songs presented in the exhibition as 7" vinyl records in specially designed listening booths which overlook the city's central station. The project includes contributions by legendary figures such as David Sylvian, Scritti Politti, Lætitia Sadier and Damon & Naomi, the trailblazing experimental and indie acts (Demdike Stare, Planningtorock, Maria Minerva, Heroin In Tahiti, Pye Corner Audio, Peaking Lights), local heroes across different generations (Elektronische Musik aus: Köln, Pluramon, Cologne Tape), and a special guest turn from the original German superstar Julia Hummer.

my heart's in my hand, and my hand is pierced, and my hand's in the bag, and the bag is shut, and my heart is caught is a headfirst dive into a city, tuning in to its many unheard stories and facets of its life that are routinely overlooked. Collins is interested in the lyrical and epic potential of the human voice, specifically in relation to a declining landline technology. He looks at the emotional relationship we have with the telephone when it functions as a measure of our social existence. The project brings back into focus the almost forgotten aspects of a telephone conversation: its physicality and romance; its ceremonial and performative nature; its ability to create and counter distance, and to conjure up the poetry of the spoken word - turn of phrase, the longing for someone or somewhere. Structuring it as an opportunity for a bargain, Collins isolates and dramatises the moment of communication as an intimate and ambivalent encounter.

Other works in the exhibition are spawns of the same unholy alliance between pop and politics. They both feature original soundtracks by Welsh musician Gruff Rhys and North Wales surf band Y Niwl. This Unfortunate Thing Between Us (2011) is an installation based on TUTBU.TV, an alternative shopping channel performed and broadcast live on German national television. Hosted by a cast of actors and porn workers (Julia Hummer, Susanne Sachsse, Sharon Smith, Judy Minx, Pau Pappel, Matthias Matschke, Trystan Pütter, Niels Bormann, Christian Kärgel, Marcel Schlutt), TUTBU.TV sold real life experiences in place of mass-produced commodities, offering a tantalising glimpse into what could be the future of consumer television. Conceived on the other side of the world in Malaysia, the short film the meaning of style (2011) is a tropical fantasy featuring a cast of anti-fascist skinheads and exotic butterflies, which provides the frame for a poetic meditation on the relationship between British colonial history and youth subcultures in South-East Asia.

Phil Collins would like to thank all the collaborators and artists who have contributed to this exhibition and who remain a constant and insistent inspiration.