Conceived as notes toward the making of a future film, Medium Earth attunes itself to the seismic psyche of the state of California. The project represents the outgrowth of research undertaken throughout California in advance of a larger project. In conjunction with the exhibition, Redcat presents Body Tremors: The Geopoetics of Prediction and Premonition, a series of presentations and conversations. 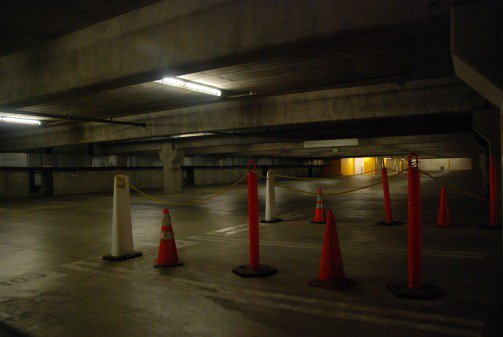 Part prequel and part premonition, Medium Earth is a work caught within its own imminent future. A notebook film that initiates a new cycle of production by London-based artists The Otolith Group, Medium Earth represents the outgrowth of research undertaken throughout California in advance of a larger project. Conceived as notes toward the making of a future film, Medium Earth attunes itself to the seismic psyche of the state of California. It listens to its deserts, translates the writing of its stones, and deciphers the calligraphies of its expansion cracks. Commissioned by REDCAT and complimented by a series of public programs on the geopoetic practices of prediction and premonition, it is the first work produced by The Otolith Group within an American context.

The accumulation of moving images and sounds that make up Medium Earth comprise an audiovisual essay on the millennial time of geology and the infrastructural unconscious of Southern California. Focused on the ways in which tectonic forces express themselves in boulder outcrops and the hairline fractures of cast concrete, Medium Earth participates in the cultures of prophecy and forecasting that mediate the experience of seismic upheaval. The desire to evoke the hidden substrata of the planet gives way to a morphological interpretation of the face of the earth. As an experiment in channeling the system of fault lines buried below California, Medium Earth animates the stresses and strains of physical geographies undergoing continental pressures.

Founded in 2002 by Anjalika Sagar and Kodwo Eshun, The Otolith Group is an award-winning artist collective based in London. The Otolith Group produces films, installations, and exhibitions that emerge from archival research into the global nuclear regime, speculative futures, tricontinentalism, and cybernetics. Recent exhibitions have been presented at museums including MAXXI, Rome; MIT List Visual Arts Center, Boston; MACBA, Barcelona; Bétonsalon, Paris; and The Showroom, London. Their work has been included in such international exhibitions as dOCUMENTA 13; the 29th São Paulo Biennial; and Manifesta 8, Murcia, Spain. In 2010, The Otolith Group was nominated for the Turner Prize.

The Otolith Group: Medium Earth is funded in part with generous support from the British Council and the Pasadena Art Alliance. The Standard is the official hotel of REDCAT.

Sunday, April 21, 12–6pm:
Body Tremors: The Geopoetics of Prediction and Premonition, a series of presentations and conversations exploring the agency of the seismic and the sensitive.

1pm
On the history, present, and future of seismology as prediction
Susan Elizabeth Hough, seismologist at the United States Geological Survey in Pasadena, California

3pm
The parking garage as architectural unconscious
Rebecca Solnit, essayist and author of thirteen books on subjects ranging from the environment, politics, place, and art

4:15pm
Urban infrastructures of the present
Norman M. Klein, cultural critic, and both an urban and media historian, as well as a novelist

5pm
Desert poetics and the imaginary desert
Dick Hebdige, media theorist and sociologist, and current director of the Desert Studies Project, a pilot program in interdisciplinary California-embedded arts-centered research, immersion pedagogy, and process curating organized by The University of California Institute for Research in the Arts in collaboration with the UC Riverside Sweeney Art Gallery