By bringing together video, sculpture, participatory prompts and ephemera by Shinsuke Aso, Nicky Enright, Heather Hart, Mary Jeys, Michelle Kaufman, Carolyn Lambert, and Scott Massey, the gallery becomes a space for conversation about these circumstances and hopefully a catalytic platform for new solutions. 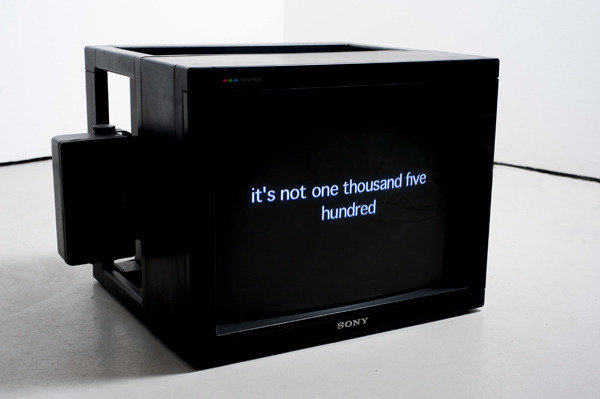 NURTUREart is pleased to present Cashing Out, curated by Petrushka Bazin Larsen - the first exhibition to use NURTUREart's new Online Registry as a curatorial resource. Cashing Out features artists' musings on our current financial system and their creative proposals for establishing alternative economies. The exhibition is informed by economic inequities, excessive production of goods, unfair wages, discord between nations and an overall desire to become a more sustainable society where we rely on each other and our natural abilities to make ends meet. Looking to the artist as an author of innovation and creative problem solving, Cashing Out also considers how our current economy can be destabilized using community networks, cooperative economics, bartering, and other exchanges.

By bringing together video, sculpture, participatory prompts and ephemera by Shinsuke Aso, Nicky Enright,Heather Hart, Mary Jeys, Michelle Kaufman, Carolyn Lambert, and Scott Massey, the gallery becomes a space for conversation about these circumstances and hopefully a catalytic platform for new solutions.

Shinsuke Aso is currently based in Brooklyn, NY. He received his BFA from School of Visual Arts in 2004 after graduating from Kitakanto School of Fine Arts in Gumma, Japan. His work has been included in exhibitions at Minus Space, Agape Enterprise, NURTUREart, Mass MoCA, Pera Museum (Istanbul), and Maki Fine Arts (Japan).

Nicky Enright is a New York-based multimedia artist whose work has been exhibited at the Bronx Museum, No Longer Empty, The World Bank, and Exit Art. Enright has also been commissioned by Performa, The Smithsonian Institution, and NASA. He earned a BFA from The Cooper Union and an MFA from Hunter College.

Brooklyn-based artist Heather Hart’s work has been included in exhibitions at the Brooklyn Museum, El Museo del Barrio, Jersey City Museum, and MoMA PS1. She received her MFA from Rutgers University, completed the Whitney ISP program and was an artist in residence at Skowhegan School of Painting and Sculpture, Santa Fe Art Institute, and Franconia Sculpture Park. She has received awards from Socrates Sculpture Park, New York Foundation for the Arts, and Jerome Foundation.

Currently based in Brooklyn, Mary Jeys is the Founder of the Brooklyn Torch Project and Co-Founder of Dobbin Project Space. She has participated in fellowships and residencies at The Laundromat Project and Lower Manhattan Cultural Council, and has received grants from Art Matters, FEAST in Brooklyn and Macktez. She received her Bachelor’s Degree in Fine Arts from the University of Texas at Austin.

Michelle Kaufman’s work has been included in exhibitions at Real Art Ways in Connecticut, Lyons Wier Gallery, Yashar Gallery and NY Studio Gallery. Kaufman is also the recipient of an Artslant award for Painting. She studied at Hunter College and is currently based in Brooklyn.

Carolyn Lambert’s performance, video and installation work has been exhibited throughout the United States including Eyebeam, Maccarone Gallery, and Anthology Film Archives. She received her MFA from Carnegie Mellon in 2005 and has been awarded grants from the Ford Motor Company, National Wildlife Federation, and the Steinbrenner Institute. She has participated in residencies at the Lower Manhattan Cultural Council, Volunteer Lawyers for the Arts, and Banff Centre for the Arts. She lives and works on the Brooklyn/Queens border in Ridgewood, NY.

Scott Massey currently lives and works in London. He received his BFA in 2006 from Bath Spa and recently received his MA from Chelsea College of Art & Design. He spent the last few years involved with Vulpes Vulpes, an artist led project space in London.