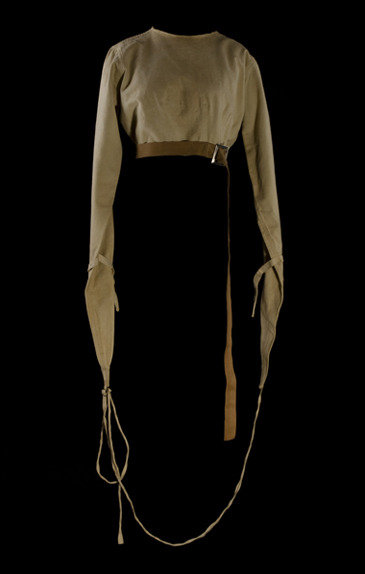 For Fradgley, an encounter with Victorian portrait photographs of patients wearing unfamiliar quilted dresses at Bethlem Hospital (formerly known as Bedlam), raised questions around protection and restraint in psychiatric care.

Research at Bethlem Royal Hospital Archive and Museum provided the inspiration and the raw material for a project in which the artist investigates and contributes to a dialogue around historic and contemporary methods of care, confinement and control. The resulting body of work sheds light on the purpose of such clothing and illuminates an historic aspect of mental health practice.

These compelling photographs evidence the artist’s interest in fabric and utilitarian garments, an intrinsic remnant of her previous career as a fashion designer and a contributing factor to a unique view of what may otherwise be regarded as an inhumane form of control.

The “design and the attention to detail in some of these well-constructed garments” led Fradgley to contemplate how “dignity and comfort for the wearer” had been taken into consideration, suggesting efforts to emulate the aesthetic features of ordinary clothing whilst providing restraint and protection.

The close up detail and composition of these photographs offer a poetic exploration of the sculptural qualities of this strong clothing and at human scale these haunting images resonate with the untold stories of the wearer.

The Maudsley Charity are supporting Jane Fradgley to produce an artist’s book.

Sarah Bennett’s practice focuses on regulatory systems, institutional controls and constraints. In this exhibition she shows several works from her project Re-formations, an investigation into methods of containment and coercion.

The project focuses on a former 19th century lunatic asylum at Exminster near Exeter and examines the building’s spaces and the site's histories. Wall wounds (found) and Wall wounds (fabricated) are two series of photographic images from this project.

Wall wounds (found) records the traces of everyday interactions between the building and its inhabitants. These anonymous and potent marks of containment suggest a narrative event, even if they reveal little of the particular circumstances. In the series Wall-wounds (fabricated) the artist has set up a system within which she re-enacts the original actions in order to “explore the analogies between control and discipline on my own body and that exerted in institutional contexts.

For press enquiries, to arrange an interview or to be sent press releases and high resolution images contact Kate Foster, Head of Communications and Development, Plymouth Arts Centre, phone: 01752 276994 or 07815 754088 or email: kate.foster@plymouthartscentre.org