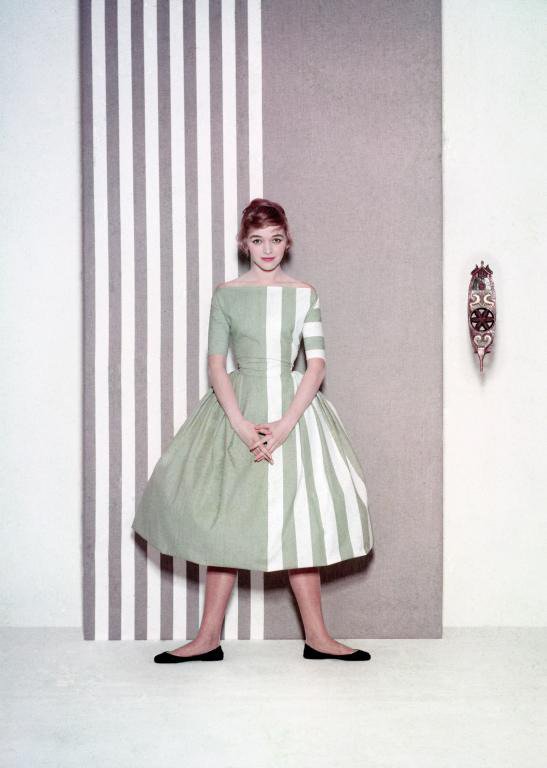 In the early 1950s, at a highpoint in Finnish design culture, Aho (b. 1925, Finland) established a Helsinki-based photography studio under her own name. Her prolific output spanned advertising, editorial, reportage and fashion for a range of commercial applications. She dealt with all aspects of the creative process, from casting models, set-making, styling and lighting to developing and printing her own images.

Aho’s relationship to the studio space is taken as the starting point for this exhibition, and is used as a prism through which to understand the relationship with her subjects, and – in particular – her dialogue with form, colour and pattern. Evidence of the mechanics of the image making process, such as colour charts, studio lights and backdrops are often included within the frame of the exhibited images.

The exhibition will also include a display of original materials where the images have been cropped and combined with graphics for magazine covers, advertising and packaging.

The photographs, spanning her career from 1950 to 1970, illustrate Aho’s trademark vibrancy and humour, through formally inventive compositions and scenarios constantly reimagined.

Claire Aho currently lives in Stockholm, Sweden. The grandchild of the celebrated author Juhani Aho and painter Venny Soldan-Brofeldt, she obtained her first camera at the age of ten. Her work was appraised in a major retrospective at Taidehalli, Helsinki in 2011.

The four artists shortlisted for the Deutsche Börse Photography Prize 2013 are Mishka Henner, Chris Killip, Cristina De Middel and the artist duo Adam Broomberg & Oliver Chanarin. The winner will be announced at a special ceremony at The Photographers’ Gallery on 10 June 2013. Works by the shortlisted photographers will be shown in an exhibition at The Photographers’ Gallery followed by presentations at the Deutsche Börse headquarters in Frankfurt/Eschborn and at C/O Berlin, Forum for Visual Dialogues.

The Deutsche Börse Photography Prize 2013 is presented by The Photographers’ Gallery, London. The annual award of £30,000 rewards a living photographer, of any nationality, for a specific body of work in an exhibition or publication format, which has significantly contributed to photography in Europe between 1 October 2011 and 30 September 2012.

The four shortlisted artists have been nominated for the following projects:

Adam Broomberg (b. 1970, South Africa) & Oliver Chanarin (b. 1971, UK) are nominated for their publication War Primer 2 (2012, MACK). The limited edition book physically inhabits the pages of Bertolt Brecht's publication War Primer (1955). In the original, Brecht matched WWII newspaper clippings with short poems that sought to demystify press images, which he referred to as hieroglyphics. In War Primer 2 Broomberg & Chanarin choose to focus on the ‘War on Terror’; sifting through the internet for low resolution screen-grabs and mobile phone images, the artists then combined them to resonate with Brecht's poems. Through this layering of photographic history, Broomberg & Chanarin offer a critique of photographs of contemporary conflict and their dissemination—a theme that has been at the centre of their practice for fifteen years.

Chris Killip (b. 1946, UK) is nominated for his exhibition What Happened Great Britain 1970 - 1990 at Le Bal, Paris (11 May - 19 August 2012). In this series of stark black and white images Killip chronicles the disintegration of industrial Britain in working class communities in the north of England. Immersing himself in the lives of the people he documented, Killip tells personal stories of men at work set against a backdrop of socio-political upheaval.

Cristina De Middel (b. 1975, Spain) is nominated for her publication The Afronauts (2011, self-published). In 1964, after gaining independence, Zambia started a space programme led by Edward Makuka Nkoloso, sole member of the unheard of National Academy of Science, Space Research and Philosophy. The programme, whose aim was to send the first African astronauts to Mars, was soon cancelled, becoming no more than an amusing anecdote in the country’s history. In The Afronauts De Middel creates a subjective version of the story engaging with myths and truths. The book is comprised of a series of constructed colour photographs, sequenced alongside drawings and reproductions of letters, resulting in a fictional portrait of a national dream.

Brett Rogers, Director of The Photographers’ Gallery and Chair of the Jury said: This year’s jury selected four artists whose work represents four distinct and significant positions within contemporary photography - Chris Killip for his singular and timeless vision reinterpreting the possibilities of documentary practice; Broomberg & Chanarin for their surgical examination of images of conflict using Brecht’s War Primer as their source; Mishka Henner for appropriating the archive of Google Street View photographs to examine the landscape of today’s sex workers and Cristina De Middel’s ‘mockumentary’ on the Zambian space programme which confidently blurs the boundaries of fact and fiction in a highly original way.

Julia Taeschner, Head of Corporate Responsibility for Deutsche Börse said: This year’s shortlist once again shows the broad variety of different approaches to the medium of contemporary photography - from traditional to innovative positions. We thank the jury for their excellent selection and look very much forward to the exhibition next year.