An alternative retrospectives with a new mise-en-scene, very recent and lesser-known works, and an historical insert by Marlow Moss. Bell is a "spontaneous and improvisational, investigator of improbable visuals by improbably means", Crowner re-stitches fragments into new concurrences, Moss was a British, lesbian, Constructivist artist. 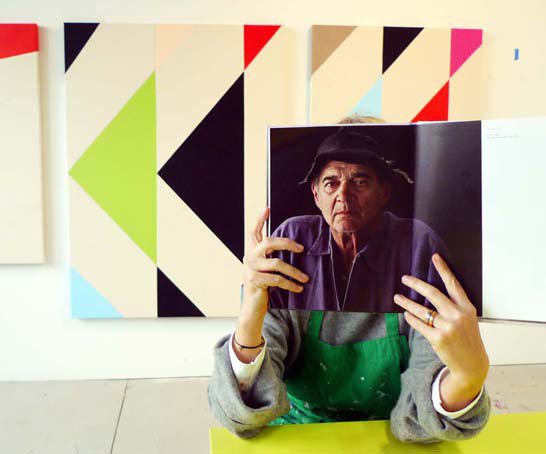 Kunstverein continues its research into alternative retrospectives with a new mise-en-scène by Sarah Crowner containing very recent and lesser-known works by Larry Bell, and an historical insert by Marlow Moss.

The three protagonists:
-
Larry Bell (b. 1939 in Chicago, lives and works in Taos and LA) walked around Venice California in the early sixties with a camera attached to his back, a bio-feedback chip in his hat and a trigger mechanism connected to his earlobes. Alpha waves emitted by a body in a state of wellbeing would set off the photo-taking process and eventually lead to a series of blurred pictures capturing perception on the move, observation in its most random form. Larry Bell, probably known best for his minimal glass sculpture, (the cubes were first exhibited at Pace Gallery in 1965) is a ‘spontaneous and improvisational, investigator of improbable visuals by improbably means’. Each thing, he says, was an experiment in something, where craft and simplicity (how do I make this thing simpler, how does it become through less doing?) were key issues. Finish Fetish West Coast Minimalism preferred a softer surface–like Bell’s coated glass–as opposed to the harder East Coast predilection for industrial materials like steel, concrete or plywood. But both were commenting on the relation to their technological environment. Californian artists, you could say added luster to their reductionism, added the sun, the surf and the gloss of custom-made cars. And where Bell’s ‘stable unit’ was once evidently a cube, it is now twisted, pink, yellow, bright red and reflective, undaunted by its own surface contortion.
-
Sarah Crowner (b. 1974 in Philadelphia, lives and works in Brooklyn NY) is inter-disciplinary Modernism. Geometric constructs follow the spirit and legacy of past practices, cutting up, referencing, undoing, adding to, playing on and tribute to, a language of abstraction. Unfolding, remembering and befriending the past, through scissors, fabric, thread, ceramics, wood, an industrial sewing machine, and paint, Crowner re-stitches fragments into new concurrences. Paintings as paintings and paintings not afraid of being fashion, design, and part of our current technological, even voguish, environment restage art historical points of interest and anxiety, updating them into contemporary concerns.
For Larry Bell and Sarah Crowner, Meet Marlow Moss, Crowner visits Larry Bell and Marlow Moss, creating a complete setting for the exhibited pieces, including her own. New large-scale works are an analysis of earlier Bell and Moss, at once closely referencing these latest temporary teammates and at the same time tripping the light fantastic and stating full autonomy.
-
Marjorie Jewel “Marlow” Moss (1889 – 1958), also known as Marlow Moss, was a biological realist, a recluse, a persona non grata, a phenomenon, an Amazon. She was a British, lesbian, Constructivist artist. She was also a woman, a Modernist, and a Neo Plasticist, a disciple of Piet Mondrian, and a student of Léger. She was a painter and a sculptor. She was a drag-king. She was a contemporary of Georges Vantongerloo, Jean Gorin, and Max Bill. Added to the list of adjectives could also be ‘middle class’, or even ‘upper-middle-class’, and Jewish, but then again she was also an atheist and an existentialist. Moss disrupts and subverts the narratives that could include her. This resistance to categorisation is a large factor in Moss’s obscurity; she is omitted from the histories, because she does not fit in. To date she is most consistently approached in reference to Mondrian, a context that casts her in the role of follower, or worse: imitator, a role that’s far beneath her.
-
Kunstverein Publishing
Larry Bell, Sarah Crowner, Marlow Moss is a Kunstverein publication designed by Marc Hollenstein that will be launched during the Marlow Moss event, 18 May.
-
Other dates and venues
18 April: Larry Bell artist-talk with Stedelijk Museum Amsterdam director Ann Goldstein in the Teijin Auditorium, Stedelijk Museum, 8–9.30 pm
18 May: Insert by Marlow Moss, an event at Kunstverein, 5–8 pm
-
Larry Bell and Sarah Crowner, Meet Marlow Moss is made possible with the support of Stichting Niemeijer Fonds; Stadsdeel Zuid; Het Amsterdams Fonds voor de Kunst and Kunstverein’s (Gold) members. With thanks to De Vleeshal, Middelburg