Winogrand (1928-1984) captured moments of everyday American life in the postwar era, producing an expansive picture of a nation rich with possibility yet threatening to spin out of control. Trisha Donnelly moves back and forth between abstraction and figuration to capture and articulate the many ineffable forces that shape our lives. On view Modern Art from Matisse to Marini from Elise S. Haas's art collection. 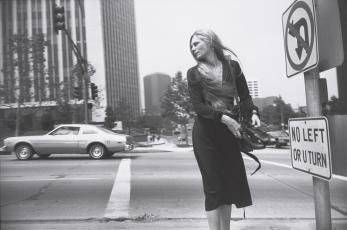 Widely acknowledged as one of the most important photographers of the 20th century, Garry Winogrand (1928-1984) captured moments of everyday American life in the postwar era, producing an expansive picture of a nation rich with possibility yet threatening to spin out of control. He did much of his best-known work in New York in the 1960s, becoming a major voice of that tumultuous decade. But he also roamed widely around the United States, from California and Texas to Miami and Chicago. He photographed the rich and powerful and everyday strangers on the street; antiwar protesters and politicians; airports and zoos. In many of these pictures, humor and visual energy are the flip sides of an anxious instability. As photographer and guest curator Leo Rubinfien says, "The hope and buoyancy of middle-class life in postwar America is half of the emotional heart of Winogrand's work. The other half is a sense of undoing."

When he died suddenly at age 56, Winogrand left behind thousands of rolls of exposed but undeveloped film and unedited contact sheets — some 250,000 frames in total. Nearly 100 of these pictures have been printed for the first time for this long-awaited retrospective of his work. By presenting such archival discoveries alongside celebrated pictures, Garry Winogrand reframes a career that was, like the artist's America, both epic and unresolved. This exhibition has been jointly organized by SFMOMA and the National Gallery of Art in Washington, and will travel to the Metropolitan Museum of Art in New York, Jeu de Paume in Paris, and Fundación MAPFRE in Madrid.

Working across a wide range of media — performance, video, sound, photography, drawings, and sculpture — San Francisco native Trisha Donnelly moves back and forth between abstraction and figuration to capture and articulate the many ineffable forces that shape our lives. She is often drawn to subjects involving invisible physical forms such as sine waves, vibrations, and electric currents, or that which remains just beyond the reach of visual intelligibility but is felt and present nonetheless. For SFMOMA's New Work series — her first solo exhibition in San Francisco — she presents a group of new works made especially for SFMOMA's galleries.

Elise S. Haas's art collection reflected a personal sensibility cultivated through years of looking at art and even making work in the studio. This exhibition sheds new light on the formation and legacy of Haas's collection by paying tribute to her exceptional bequest to SFMOMA — a gift that featured more than thirty paintings, sculptures, and works on paper by Henri Matisse, Marino Marini, Georgia O'Keeffe, and Pablo Picasso, among others.