The journey of an art work: the making of an icon. The exhibition explores the visual and literary mechanisms by which artworks come to acquire a range of meanings and functions that can embody a number of diverse, and at times conflicting, narratives. 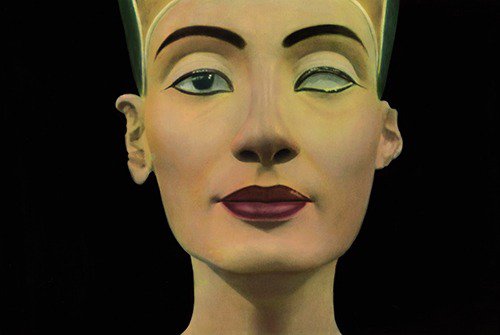 Curated by Sam Bardaouil and Till Fellrath

Le Théorème de Néfertiti (Tea with Nefertiti) explores the visual and literary mechanisms by which artworks come to acquire a range of meanings and functions that can embody a number of diverse, and at times conflicting, narratives. Through employing the Nefertiti bust as a metaphorical thread, and by interrogating the contested history of Egyptian Museum collections from the 19th century onwards, the exhibition is concerned with the critique of museology, the staging of the artwork and the writing of art- historical narrative as a means of forming and informing cultural otherness.

The exhibition is organized along three thematic chapters that reflect on the process of appropriation, de-contextualization and re-semanticisation that an artwork undergoes as it travels through time and place. The "Artist" section highlights the artist's formalistic departures and contributions as evidenced through the artworks on display. The "Museum" section examines the institutionalization of art interrogating how the context in which an artwork is presented bestows on it new meanings and functions. The "Public" section maps out the unpredictable evolution of art as it expands beyond the atelier and the museum and gets coerced into the writing of problematic meta-narratives.

Le Théorème de Néfertiti (Tea with Nefertiti) is constructed around a series of juxtapositions and groupings of historic, modern and contemporary artworks and documents. This is intended as a gesture towards breaking away from more familiar museum classifications that have been conventionally based on geography, periods and style. It proposes alternative paradigms for art-historical construction that transcend the confines of geo-temporal linearity. These constructs are conceived as pointers to an ongoing process of cultural transfer, of appropriation and negotiation that exists beyond the parameters of a much-contested historiography.

The exhibition also includes a number of artworks that are conventionally labeled as Pharaonic, Coptic and Islamic by artists whose names are now unknown.

An academic symposium will take place on June 26 and 27 based on the themes of the exhibition at the Institut National d'Histoire de l'Art (INHA), Paris.