La Crevette Amoureuse. This manuscript was never printed until 1994 when Peppe Morra bought the manuscript. Under Chopin's supervision it was published in addition with an Italian version, curated by the Italian poet Stelio Maria Martini. 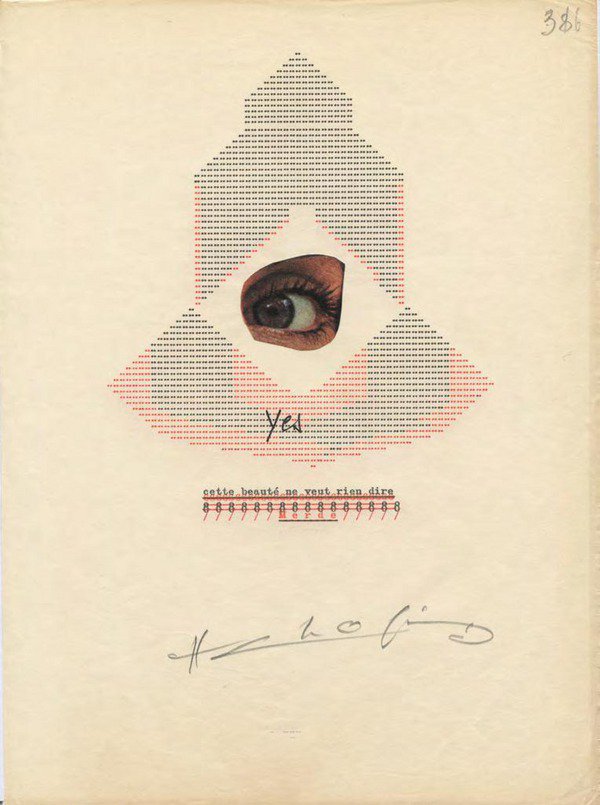 La Crevette Amoureuse (1967/1975) is part of the trilogy of Le Dernier Roman du Monde (together with l'Hommard Cosmographique) that Chopin started to write in 1961. This manuscript was never printed until 1994 when Peppe Morra, Henri Chopin’s former gallerist in Naples and current president of the Morra Foundation, bought the manuscript. Under Chopin’s supervision it was published in addition with an Italian version, curated by the Italian poet Stelio Maria Martini.

The work had its exhibition debut in 2012, as part of the group show “Ecstatic Alphabet” curated by Laura Hopman at the MoMA in New York.

The language and the words run freely through the manuscript, but feel, at the same time ordered. It is a continuous movement of construction and deconstruction of the meaning itself. True to Chopin’s style, a certain Dada spirit hovers over the narration. 146 pages of freedom, conscience and connaissance exhibit how flexible the use of the meaning and the shape of every single letter can be. We will open this unbound manuscript (every single one signed by the artist) to the public in collaboration with the architects Kuhn- Malvezzi who will design the display of the show.

Henri Chopin’s name is barely known to most people, and yet he was a key figure in the French avant-garde of the fifties and sixties. As poet, tape experimenter, painter, graphic artist, typographer, performance artist, broadcaster and film director, Chopin was a prolific artist, but in his roles as independent publisher and arts promoter he was also a tireless champion and focal point for other artists in the areas of sound poetry, text-sound, audio-poems and other avant-garde poetry experiments.
Born outside of Paris, France in 1922 he was heavily inspired by Dufrene and other earlier Dadaists poets. By the mid 1950s Chopin began his own experiments with voice and tape, as well as to record some older sound poets, like Raoul Hausmann, one of the founders of the Berlin Dada of 1918. Chopin was a firm believer that untouched humanity was solely to be found within the raw voice. Having escaped from a German forced labor camp during World War II and seen the horrors of the Korean War, Chopin saw language as an abstruse instrument only capable of lying. Language in his belief had been exploited. Thus, Chopin tried to find the purest form of sound within the body, which led him to swallow a microphone allowing him to capture the voice in the most untouched and purest form. His sound poetry thus, remained void of words and never relied on written language during the process of creation. His recording process mimicked the voice, whereby no correction was possible after an outcome. This idea is also apparent and captured in his dactylopoems and manuscripts, starting in the early 60s whereby the typewriter started to play the role of the voice. In his visual poetry, the typewritten letters create visual images, as well as sound images, leaving interpretation up to the individual. Chopin’s work pointed the way in which technology could re-define poetry, and open it up to even less reliance on language.
Aside from his work as an artist, Chopin also played an important part in promoting contemporary poetry by publishing the 19-issue journal Cinquieme Saison from 1959 to 1963, and then the 13-issue magazine with phonograph record Revue OU from 1964 to 1974. The records showcased a broad spectrum of avant-garde artists from Europe and the United States, from the early Dadaists like Hausmann, to Ultraletterists like Dufrene, Swedish text-sound artists like Ake Hodell and Sten Hanson, and early work by Bob Cobbing, Brion Gyson, and William Burroughs, among others, as well as Chopin’s own work.
In 1968 Chopin relocated from Paris to London. The following year Tangent Records, London released his LP Audiopoems. England was to play an important role in Chopin ́s life, maintaining the ties between his British wife, who died in the late 70s and his daughter Brigitte ́s home, where Chopin passed away. For Chopin the late 80s became his most productive working period. During that time he moved back to continental Europe, travelling and working intensely on his dactylopoems and sound poetry, which he continued to write and perform until his death in 2008.