The Art Song Collection. The multimedia works shown resume artist's often humorous and subtle debate on the issue of the artist within the art world. In her filmic and installational works she analyses the operating procedures and principles of the art system. 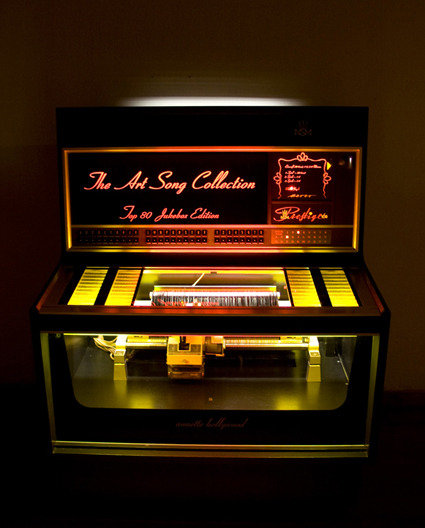 The multimedia works shown in the exhibition resume annette hollywood’s often humorous and subtle debate on the issue of the artist within the art world. In her filmic and installational works annette hollywood analyses the operating procedures and principles of the art system and queries the position of the artists themselves. This occurs, for example, in hollywood’s cunning infiltration of the dominant mechanisms of the art market (most recently in her film Hit (by great art), 2011) or in her staging of the relationship between artist and curator as a hip-hop battle (as in her video Sorry curator, 2008). annette hollywood consistently adapts methods and production processes of pop and subculture, taking great pleasure in an exaggeration of the means, and transfers these into the realm of her own artistic production. The interactive work art karaoke, for instance, which was first shown at the Biennale in Prague in 2005, invites the viewer to become a karaoke-singing part of the installation ensemble. The genre of ART SONGS, developed by annette hollywood for art karaoke, is also the starting point and multilayered clou of THE ART SONG COLLECTION.

For several years, annette hollywood has been collecting vinyl singles, from the entire spectrum of pop music, that sing of love. A seemingly simple manoeuvre transforms the songs into ART SONGS; the inflationary term "Love" is replaced with "Art". annette hollywood has now compiled and re-recorded a selection of these titles for the exhibition THE ART SONG COLLECTION. The rededicated lyrics shed new light on our relationship to art, whereby art and love occasionally seem to display unfamiliar parallels and/or contradictions: "ART HURTS, art scars, art wounds and marks, any heart, not tough or strong enough, to take a lot of pain, take a lot of pain, art is like a cloud, holds a lot of rain, art hurts, ohohoh, art hurts..." (Original: Love Hurts, Nazareth, 1976).

What at first seems like an ironic refraction is a passionate tribute to art. At the same time, it turns the pop song into a reflexive medium; from "Art is a battlefield" to "I am a Woman in Art" or "The Power of Art", the question of the circumstances of art and its protagonists poses itself anew with each song. With the covering of songs – a common and often promising production strategy of popular music – issues of originality and authorship, but also of artistic strategies and adaption methods, are addressed. However, annette hollywood’s ART SONGS are cover versions under altered signs: the "real" single covers are manually adapted for the artistic rededications (i.e. the newly-recorded songs). In turn, the mass-produced single becomes an original, individual piece once again. Conceptually, the works tie in with and apply strategies of Appropriation Art and Pop Art.

The interactive installation THE ART SONG COLLECTION. TOP 80 JUKEBOX EDITION constitutes the glamorous core of the exhibition. A revised jukebox from the 1970s is equipped with 80 of the artistʼs vinyl singles and enables the audience to make individual selections. In recourse to the analogue technology of the jukebox, annette hollywood unveils the mechanisms of selection and playback, making processes visible that usually evade our perception. Not least, the jukebox alludes to the commerciality of the art system: "Can’t buy me art" claims the Beatles adaption, although the music here only sounds after money has been inserted into a coin slot. Against the background of pop history, the structures of the art world and the production of meaning are reflected within a playfully performative appropriation.

The exhibition THE ART SONG COLLECTION presents itself as an analysis of the complex and sometimes contradictory love of art – and of collecting. With this work complex, annette hollywood makes reference to her previous artistic discussion of the issue of collecting. Archival materials from a family album and the early film Der Sammler (1997/ 2013), a portrait of her record-collecting father, offer insights into the psychosocial dynamics and idiosyncrasies of collecting and frame the collecting passion that becomes apparent in view of THE ART SONG COLLECTION.