For the installation 'Reanimation' Jonas designed "imaginary walls" out of paper, based on Japanese shoji screens made of paper and wood. 'A handful of Chalk', Weiner distributes words and groups of words referring to the fractionation of described material gives. 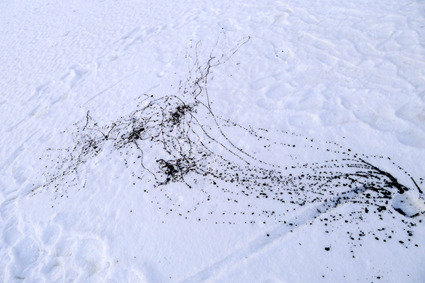 The Galerie Yvon Lambert is pleased to announce an exhibition dedicated to American artist Joan Jonas, one of the pioneers of performance and video. Jonas’s 40-year body of work has been and continues to be internationally influential. This is Joan Jonas’s third solo exhibition at the Galerie Yvon Lambert in Paris, following those at Galerie Yvon Lambert New York in 2005, 2007, and 2010. For this exhibition Jonas presents Reanimation II, which is a variation of a project she began to develop in 2010 and was shown for the first time in its finished form at dOCUMENTA (13), Kassel, in 2012 in a pre-fabricated house in the Karlsaue Park. Jonas had been working on this project for two years prior, beginning in 2010. The entire work is based on the novel Under the Glacier by Icelandic writer Halldór Laxness, published in the 1960s. As Jonas says, the book “is partly an homage to spiritual aspects of nature, focusing on a particular glacier, but as glaciers are now melting the work Reanimation reflects this present-day situation.”

For dOCUMENTA (13), curator Carolyn Christov-Bakargiev gave a group of artists the choice of working with pre-fabricated houses in the Karlsaue Park. After choosing a house from a catalogue, Jonas removed its internal walls and reconfigured the windows through which her video elements could be viewed to create Reanimation (In a Meadow). The audience could not enter the house. Jonas used her My New Theater structures to present three of her videos in three of the windows of the house: Glacier, 2010 (in two parts that were featured in two of the windows) and Fish, 2012 (in the third window). To create the Glacier video element, Jonas had also intercut scenes from two earlier works, Disturbances, 1973, and The Shape, the Scent the Feel of Things, 2005-2006.

The fourth and largest window of the Reanimation (In a Meadow) house presented the video Reanimation, 2012, as well as drawings and, on the floor, a sculpture of suspended crystals through which was projected an untitled video of Jonas drawing with ink and ice. Around the edges of Reanimation’s large suspended video screen, one had a partial view of the My New Theater structures within the house. The sound associated with the individual videos was heard through speakers attached to the outside of the house. These soundtracks included extracted segments of the text by Halldór Laxness spoken by Joan Jonas, sound effects made by Jonas, and, from the video projection Reanimation, Sami singer Andy Samby’s songs composed especially for this piece.

For the performance version of Reanimation Jonas invited the composer/pianist Jason Moran to again collaborate with her on a soundtrack. This is Jonas’s third collaboration with Moran, following their work for the performances The Shape, The Scent, The Feel of Things, 2005-2006, and reading Dante, 2008-2010. During the last days of dOCUMENTA (13) in September 2012, Jonas premiered the Reanimation performance in the theater of the Kaskade Cinema, where Moran played live. Typical of her practice, Jonas re-edited the videos from the installation to become backdrops for this performance.

Typical also of Jonas’s working method is to reconfigure her installations depending on each new situation. She exhibited Reanimation I in Tokyo at Wako Works of Art in February 2013. For Reanimation II at Galerie Yvon Lambert in Paris she has again redesigned the structures in and on which the original videos are seen. For this installation Jonas designed “imaginary walls” out of paper, based on Japanese shoji screens made of paper and wood, «so the audience could step into the space instead of being kept outside,» as they were for Reanimation (In a Meadow) at dOCUMENTA (13). In this way, the viewer has an intimate, concentrated encounter directly with the video and sound. Included in Reanimation II is a new edit of the video shots of the crystal structure that had been included in the Reanimation video shown in Reanimation (In a Meadow) at dOCUMENTA (13) and a re-edit of fragments of the performance soundtrack, which includes the music of both Samby and Moran.

Access to Jonas’s creation of Reanimation and its variants is afforded by the documentary Joan Jonas: Reanimation (Michael Blackwood Productions, 2013; interview by Joan Simon) and through the “Tate Live” series, which made its debut as an online performance venue on February 28, 2013 with Jonas’s Draw Without Looking, for which she performed within the projection of the “crystal video” sequence of Reanimation and after which she was interviewed by curator Catherine Wood. It may be seen on YouTube at: http://www.tate.org.uk/whats-on/music-and-live-performance/bmwtate-live-joan-jonas

A conversation between Joan Jonas and Joan Simon has taken place at the Centre Pompidou, April 22, 2013. Joan Simon is the author of the forthcoming In the Shadow a Shadow: The Work of Joan Jonas (Gregory R. Miller and Co.) which documents four decades of Joan Jonas’ pioneering and innovative work in performance, video, and installation.

Born in New York in 1936, Joan Jonas first studied sculpture, then modern poetry and Chinese and Greek before finally obtaining her Master of Fine Arts from Columbia University in 1965. From the mid-60s, her involvement with the New York avant-garde scene, at the time made up of such figures as Andy Warhol, John Cage, Allan Kaprow, Jonas Mekas, George Maciunas, the Fluxus group, and Bruce Nauman, led her to discover performance art. At the time, the art world was dominated by pop art and minimalism. Joan Jonas however, totally transformed the status of the artwork by adopting the idea of art as a process. Her performances were first performed in exterior spaces in order to explore all of the possibilities of the space and sound, as was the case with Mirror Piece in 1971.

The same year, Joan Jonas introduced video into her work as can be seen in the piece Organic Honey’s Visual Telepathy which would be included in the performance of the same name the following year and signalled the artist’s definitive rupture or break away from the minimalist aesthetic. Indeed, in this piece the artist incorporated a reflection on folklore and the representation of female archetypes through costumes and masks. Influenced by feminism, Joan Jonas’s approach is at once introspective, narrative and symbolic. In some of her performance pieces, the artist explores the role played by women on a universal dimension.

From 1972 onward, the artist began once again to use the gallery space and continued to produce performances combining the videos, installations, sculpture, paintings, photography and drawings which precede or extend the performance work or whose themes are similar to those explored by her oeuvre, namely mythology, tales and cultural archetypes. From the beginning of the 80s, Joan Jonas has sought new sources of inspiration and has turned to historical and literary texts based on Icelandic medieval sagas, as well as the work of female poet H.D., and more recently the writings and biography of the renowned art historian Aby Warburg.

The artist has been invited to participate in 7 editions of the Documenta in Kassel included Documenta XI (2002) for which one she re-performed Lines in the Sand (then showed at the Tate Modern in London and at The Kitchen in New York in 2004).

Lawrence Weiner - A handful of chalk

Yvon Lambert – Paris is pleased to announce its ninth solo show of American artist Lawrence Weiner since their first collaboration in 1970. Recognized as a central figure among the founders of Conceptual Art, Weiner will present work specially developed for this exhibition titled : Une poignee de craie / A handful of Chalk Distributing words and groups of words referring to the fractionation of described material gives Weiner’s work an allegorical dimension and a poetic reflection of the cycle of nature. This particular work was first realized on the Magasin de Grenoble in 1988 and has been reactivated at the Yvon Lambert Gallery with a change of materiality.

Lawrence Weiner is currently exhibiting at the MACBA of Barcelona Written on the wind - Drawings by Lawrence Weiner until 23 June 2013; travelling to the Stedelijk Museum of Amsterdam in Autumn 2013. An important exhibition will be organized in the Palazzo Bembo in Venice during the 55th International Art Contemporary Biennale.

For almost four decades, Weiner has worked on the nature of language as a whole, which led him to investigate many linguistic and visual structures. As a result, his artistic productions take multiple shapes including books, films, videos, performances and audio works. In recent years, the American artist (born 1942, South Bronx, New York), has been regarded as one of the most leading artists worldwide. By considering language as a material object which can be confused with many linguistic medium, Weiner has come to offer an ambitious redefinition of the relationship between the artist and the viewer.

As Weiner’s works are mostly created for specific places, what he presents to the public’s eye is often new and exclusive. It is important to the artist to transgress conventional boundaries of language, which is why his art pieces should adapt to the culture in question. From then on, they are not only shown in English but also in the language of the country. As a pure sculptural material and not as a formal medium of communication, language turns out to be universally intelligible.

This radical approach appears to be fully coherent with Weiner’s 1968 Statement of Intent:
1. The artist may construct the work
2. The work may be fabricated
3. The work not to be built


Each being equal and consistent with the intent of the artist, the decision as to condition rests with the receiver upon the occasion of receivership.

Such a declaration permitted Lawrence Weiner to free himself from material formalism and gave his art unlimited ways to exist.

Lawrence Weiner gained international attention with important solo exhibitions including : «As Far As The Eye Can See,” co-curated by Ann Goldstein and Donna De Salvo, The Museum of Contemporary Art, Los Angeles (2008) and Whitney Museum of American Art 2007 – 2008); WITH THE PASSAGE OF TIME, Hirshhorn Museum and Sculpture Garden (1990); DISPLACEMENT, DIA Center for the Arts (1991-2); QUELQUES CHOSES, Musée d’Art Contemporarin, Bordeaux (1992); CHAINS WRAPPED AROUND ONE THING & ANOTHER BROKEN ONE BY ONE WITH THE PASSAGE OF TIME, San Francisco Museum of Modern Art (1992), Walker Art Center, Minneapolis (1994), Philadelphia Museum of Art (1994); AFTER ALL, Deutsche Guggenheim, Berlin (2000); AS FAR AS THE EYE CAN SEE, Cologne Kunstverein (2000); BENT AND BROKEN SHAFTS OF LIGHT, Kunstmuseum Wolfsburg (2000-1); et INHERENT IN THE RHUMB LINE au National Maritime Museum, Greenwich (2007).