The Angel of History

The first exhibition of the new program explores the themes of ruins and debris in art. It is based on a famous text by Walter Benjamin, inspired by a watercolor by Paul Klee. On view works from its ancient art collection to its new graduates, via emerging currents in today's art and late 20th century artists. 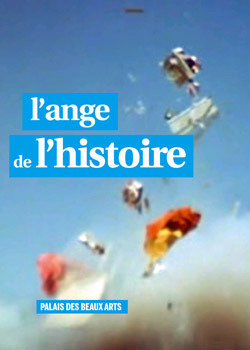 «An art school must place the interaction between artists and the public at the heart of its activities.» Nicolas Bourriaud, Director

On April 24th 2013, the exhibition galleries of the Beaux-Arts de Paris (ENSBA) will resume their historic name “Palais des Beaux-Arts”. The 1,000-m2 building was entirely redesigned to host a new program reflecting the school’s identity by confronting ancient and contemporary artworks, emerging artists and the rereading of recent art history.

The Neufville-Gayet Architectes agency, the scenographer Alexis Bertrand and the lighting conceptor Virginie Nicolas were selected to renovate the spaces of the Palais des Beaux-Arts.
Their intervention, integrated into the historic building, has made it more luminous and functional. It enhances the remarkable character of this 19th century building, formerly dedicated to students and prestigious exhibitions.

The new program of the Palais des Beaux-Arts will offer three thematic exhibitions each year, reflecting the historical spectrum covered by the school – from its ancient art collection to its new graduates, via emerging currents in today’s art and late 20th century artists.

Each exhibition will be divided into four parts or paragraphs (§), like sections in a magazine: The Beaux-arts collection/ The group exhibition of contemporary art/ Rediscovering a 20th century artist/ Young artists of the Beaux-Arts de Paris. The ENSBA’s exceptional collection, comprised of 450,000 artworks, will thus have a permanent exhibition space for the first time.

The first exhibition of this new program, “The Angel of History”, explores the themes of ruins and debris in art. It is based on a famous text by Walter Benjamin, inspired by a watercolor by Paul Klee, the portrait of The Angel of History, “which faces backwards as it is blown towards the future”, and likens the historical process to a field of ruins.

This exhibition draws together the works of a generation of artists who seem to be surveying the ruins of history, and who could be described as “digital-age primitives” because of their relationship with the archives of the web, or their interest for fragments of the past and cultural scraps.
Here, these change their status as ready-mades to become incriminating evidence...

The Beaux-Arts Collection:
“The Rhetoric of ruins from the 16th to the 19th century.” (Painting, drawing, models)

“The Disasters of War”: Paris in the aftermath of the Commune, photographs by Jules Andrieu/ France in 1915 seen by French Army photographers.
“The ruins of the cabinet of an amateur”: Dürer’s engravings from the Gatteaux Collection

Rediscovering Glauco Rodrigues:
This is the first solo show in France of this Brazilian artist (1929-2004) who strove to “recast” the history of his country through figurative painting contemporary to Pop Art. “The composition of the paintings is fragmented, different strata coexist without touching, the artist operates through collage. His work is extremely critical, a social rather than political critique since the social is an avatar of the political [...]” Simon Njami

The Belvédère is a new space dedicated to students and recent graduates of the Beaux-arts de Paris.

Florian Fouché will inaugurate it, from April 25th to May 20th. Born in 1983, he graduated in 2010 (Ateliers Deacon, Pataut, Faigenbaum) and from the La Seine research program in 2012.
He will be followed by Chloé Quenum, a 2011 graduate, from May 23rd to June 19th, then by a group show curated by Éva Barto and Jean-Baptiste Lenglet, the artistic directors of Oscillations magazine, from June 21st to July 7th.
Eva Barto is a fifth-year student. Jean- Baptiste Lenglet graduated with honors in 2012.

The catalogue of “The Angel of History” will reorganize the four sections of the exhibition into themes. It will include, among other things, a text by Nicolas Bourriaud (The angel and the signal. Historical fragments and pieces of evidence in 21st century art), conversations with Jean-Yves Jouannais, Elie During and Pamela M. Lee, as well as comments by the invited artists and a monographic section dedicated to Glauco Rodrigues.

The “Palais des Beaux-arts” project illustrates the new direction Nicolas Bourriaud intends to give to the Beaux-arts de Paris: putting art and artists at the heart of teaching.

The art critic and theorist Nicolas Bourriaud was the co-founder of the Palais de Tokyo, curator at the Tate Britain in London and Head of Inspection of artistic creation at the French Ministry of Culture and Communication. He is the author of Relational Aesthetics (Presses du reel, 1998), Formes de vie (Denoël, 1999), Postproduction (Lukas & Sternberg, 2002) and The Radicant (Sternberg Press, 2009).