Featuring approximately 150 works by 60 artists, "State of Mind: New California Art Circa 1970" explores the emergence of Conceptual art as a fertile moment of artistic production, collaboration, and experimentation. "Always Creative" is a retrospective of the work of the performance artist Linda Mary Montano, "Time, People, Crickets, Money" features new works in a range of media by Mungo Thomson. 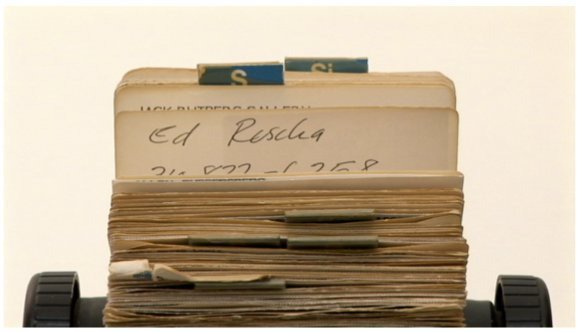 SITE Santa Fe presents three interrelated exhibitions inspired by artistic production on the West Coast of the United States from the 1970s to the present.

State of Mind: New California Art Circa 1970 explores the emergence of Conceptual art as it developed in California in the 1970s—a fertile moment of artistic production, collaboration, and experimentation, which continues to influence contemporary art today.

Featuring approximately 150 works by 60 artists, State of Mind explores the growth of Conceptualism and the exploration of new methodologies, technologies and sites for artistic expression in California in response to immense social change. Artists moved out of museums and galleries and into the streets as a form of institutional critique and aspired to create a community that fostered an exchange of radical forms and ideas. The exhibition centers on nine themes: the Street, the Environment, Politics, Feminism and Domestic Space, Public Space, Perceptual and Psychological Space, the Body and Performance, Art about Art, Artists' Books, and Ephemera.

State of Mind is curated by Constance Lewallen and Karen Moss. The tour is organized by Independent Curators International (ICI), New York, and is made possible, in part, by the Andy Warhol Foundation for the Visual Arts, the Horace W. Goldsmith Foundation, Video Data Bank, Electronic Arts Intermix (EAI), and with the generous support of Robert Redd, LLC, and the ICI Board of Trustees.

The exhibition is accompanied by an extensive publication that offers a comprehensive study of a time when California became a vibrant center for original art and exhibition making, and should be essential for anyone interested in contemporary art. The publication offers itself as an extensive source of rare primary images and fundamental essays by co-curators Constance M. Lewallen and Karen Moss, Julia Bryan-Wilson, and Anne Rorimer.

Linda Mary Montano: Always Creative is a concentrated retrospective of the work of American performance artist Linda Mary Montano (b. 1942), curated by Janet Dees, SITE's Assistant Curator, in collaboration with the artist. This exhibition considers the breadth of the artist's practice through a careful selection of works from 1969 to the present. In a career spanning over forty years, Montano has created works in a variety of forms that explore the interaction between art and life.

On Friday, May 17 from 10am to 5pm, SITE will host Linda Montano's closing performance: Singing My Heart In. For the second part of this endurance performance, the artist will be stationed in the front of SITE singing along to the music of Raka Mukherjee. Montano will descend on a scissor lift from the top of the building, once an hour for seven hours until she has reached the ground.

Published to accompany the SITE Santa Fe exhibition Linda Mary Montano: Always Creative, the book You Too Are A Performance Artist features a My Art/Life – Your Life/Art workbook written by Montano that documents 45 of her performances from 1964 to the present and gives suggestions on how readers can create their own performances based on the themes explored in Montano's work. It also includes interviews with the artists by Janet Dees, Charles Duncan and Moira Roth, a curatorial essay by Janet Dees, preface by Irene Hofmann and documentation of the exhibition. Paperback, 132 pages. 13 color/ 119 black and white. Illustrated throughout. 30 USD. ISBN: 9780985660208.

Mungo Thomson: Time, People, Crickets, Money features new works in a range of media including film, video, sound, sculpture and installation by Los Angeles-based artist Mungo Thomson (b. 1969). By exploring mass culture with language and context rather than light and space, Thomson's practice owes much to the legacy of the State of Mind generation that came before him. His work addresses the voids that exist within culture and turns the ordinary details of contemporary life into something extraordinary.