Liminal Squared. Mehretu's large-scale paintings employ a broad lexicon of drawing techniques together with a precise, muscular abstraction to investigate the intersection of politics, architecture and history and the way these forces shape the formation of our social identity. 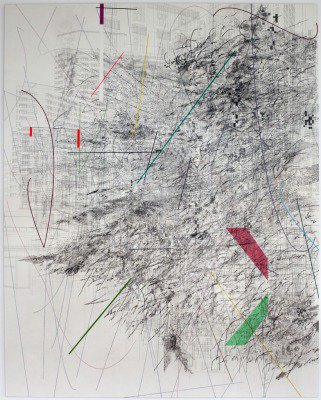 ‘I am interested in the multifaceted layers of place, space, and time that impact the formation of personal and communal identity’ (1)

White Cube Bermondsey is pleased to present an exhibition by Julie Mehretu. This is Mehretu's first major solo exhibition in London and will feature new and recent paintings, some of which will be presented within a specially constructed environment designed by David Adjaye in close collaboration with the artist. Described by curator Douglas Fogle as ‘perfect metaphors for the increasingly interconnected and complex character of the 21st century’, Mehretu's large-scale paintings, which are built up in layers, employ a broad lexicon of drawing techniques together with a precise, muscular abstraction to investigate the intersection of politics, architecture and history and the way these forces shape the formation of our social identity.

This exhibition, which features five new works, centres around ‘Mogamma: A Painting in Four Parts’, the collective name for four monumental canvases that were recently included in dOCUMENTA (13). The ‘Mogamma’ works, which were completed in 2012 shortly after the time of the Arab Spring revolutions, have evolved out of Mehretu's investigations into how architecture and geographical space, particularly within urban centres, become sites for political and mythological projection. ‘I think architecture reflects the machinations of politics, and that's why I am interested in it as a metaphor for those institutions. I don't think of architectural language as just a metaphor about space, but about spaces of power, about ideas of power’, Mehretu explains.

The title of these works relates to 'Al-Mogamma', the name of the all purpose government building in Tahrir Square, Cairo which was both instrumental in the 2011 revolution and architecturally symptomatic of Egypt's post-colonial past. The word 'Mogamma', however, means 'collective' in Arabic and historically, has been used to refer to a place that shares a mosque, a synagogue and a church and is a place of multi faith.

In the ‘Mogamma’ paintings, Mehretu has overlaid hundreds of images taken from different squares around the globe – symbolically weighted urban centres that have become nexus points for upheaval and revolution – and combined them with single blocks, lines and arcs of bold acrylic colour. The works, which contain a complex web of mark making and visual narrative, point to a reading of the built environment in our post-colonial condition, where the language and motifs of architecture always contain the metaphors for its own entropy and the fractured history of past conflict.

Likewise, in the work 'Aether (Venice)' (2011), a mass of architectural geometries of fragmented parts of the city create a dense, broken grid over which sparse single vectors or lines have been painted. Creating the effect of a momentary vision, where structures appear and then recede before the eye, the painting creates the vertiginous feeling of glimpsing, cross-section, through history and is mimetic of the chaotic nature of contemporary urban experience.

Mehretu's process is one of revealing and occlusion, of erasing selected areas of drawings and marks to produce what has been described as an effect of ‘allegorical obliteration’. These moments of determined erasure have been pushed to spectacular effect in recent works where sections of drawing and painting create areas of blurring that appear like cloud-like miasmas or explosions on the surface of the work. As Brian Dillon has recently noted about Mehretu's work, ‘...the paintings seem now more than ever to contain, in their increasingly atomised and aerated surfaces, the seeds of an as-yet-unfulfilled (and perhaps unrecoverable) future.’ (2)

An exhibition of Mehretu's new paintings will run concurrently at Marian Goodman Gallery, New York. A catalogue for ‘Liminal Squared’, with colour reproductions and essays by TJ Demos and Tacita Dean, will be published this summer on the occasion of the joint exhibitions.