Disclosures. As the centerpieces of her second show at the gallery, Ostoya presents 4 paintings and a text piece. Leoniak, who was invited by Ostoya to collaborate on the show, presents a series of 6 sculptures. 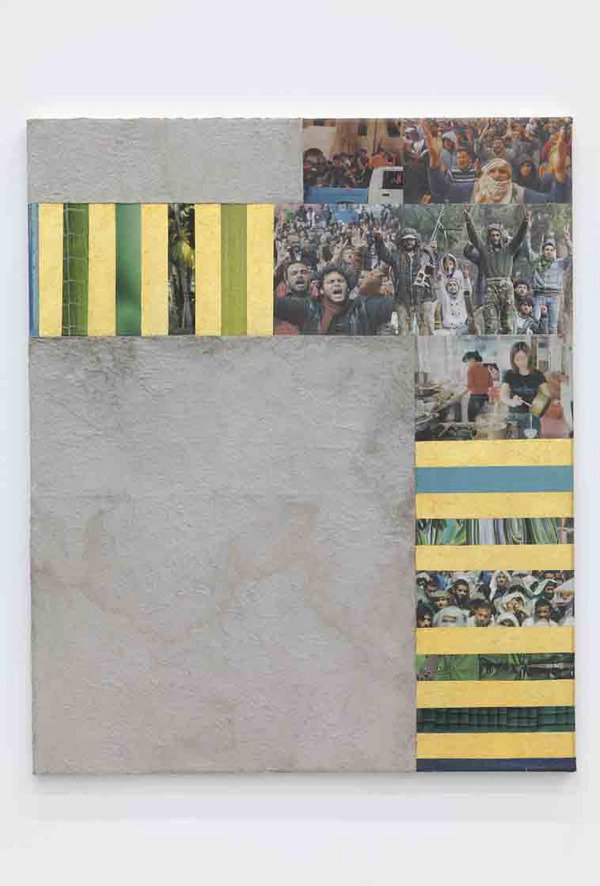 MY DESIRES WERE GRAND.

I WANTED TO CHALLENGE HOW ART IS SEEN AND PRODUCED.
AS IF MAKING A COLLAGE, I AIMED TO REARRANGE FAMILIAR ELEMENTS.

I WANTED TO ADDRESS THE MARKET AND ITS DECADENCE.

I WANTED TO ADDRESS THE ART-WORLD AND ITS CYNICISM.

I WANTED TO ADDRESS GENDER AND ITS INEQUALITY.

I WANTED TO SAY NO TO THEM.

I WANTED TO CONTRIBUTE TO THE COMMON GOOD.

I PLANNED TO INVITE BARBARA LEONIAK, A SCULPTOR AND MY FIRST ART MENTOR, TO EXHIBIT WITH ME.

I PLANNED TO PAINT LARGE CANVASES.

I PLANNED TO WRITE ABOUT DISCLOSURES.

Bortolami is pleased to announce the exhibition Disclosures, featuring new works by Anna Ostoya and Barbara Leoniak. As the centerpieces of her second show at the gallery, Ostoya presents four paintings and a text piece. Leoniak, who was invited by Ostoya to collaborate on the show, presents a series of six sculptures.

Painted over a period of two years, Ostoya’s works are semi-abstract compositions in oil on canvas. The artist based them on both reproductions of figurative works by early 20th century artists, and a snapshot of a recent social situation involving an eminent art-historian and a distinguished artist. Ostoya’s text piece Disclosures (Text) presents her desires for the exhibition and the ideas that shaped it.

The show embraces a modernist tradition of object-based art, yet it aims to situate each work in a dialogue with its spatial and conceptual context. The works can be viewed as autonomous paintings and sculptures, but they can also be seen in relation to each other and to Disclosures (Text). In this way, the overall constellation surpasses the meaning of any single piece and the intentions of either artist.

The works in this show also revisit key moments in the history of the avant-garde, but they belie that history’s rhetoric of discontinuity and rupture. While the historic works, the key objects of appropriation, represent important episodes of vanguard criticality, Ostoya and Leoniak both embrace and subvert this tradition. They impishly mock the avant-garde “boys’ club” while acknowledging its social and political relevance in an age of inequality and unrest.

Underlying this whole endeavor is a belief in continuity. The dialogues between these paintings and sculptures as well as between the objects and text reflect a deeper commonality of voices and ideas. The contributions of each artist are manifestly distinct, but they are never univocal.

Although Leoniak was Ostoya’s first artistic mentor, the exhibition presents this relationship as polymorphous and non-hierarchical. Just as their appropriations of modern art emphasize recurrence over formal innovation, their dialogue places artistic continuity and communication over Oedipal competition. Such engagements seek to redefine artistic practice as inherently collaborative and to present the history of art as a conversation rather than a sequence of monologues.

Anna Ostoya is an artist living in Brooklyn. She graduated from the Whitney Independent Study Program in 2009. Her work has appeared in Manifesta 7, Rovereto, the 2nd Athens Biennial, and other exhibitions internationally. It will also be included in the forthcoming show New Photography at the Museum of Modern Art in New York.

Barbara Leoniak is an artist living in Cracow. She graduated from the Academy of Fine Arts there in 1977. Her work was shown internationally in the 1980s, and she received a golden leaf medal, in 1985, and a silver metal, in 1990, at the Winter Sculpture Salon in Warsaw.