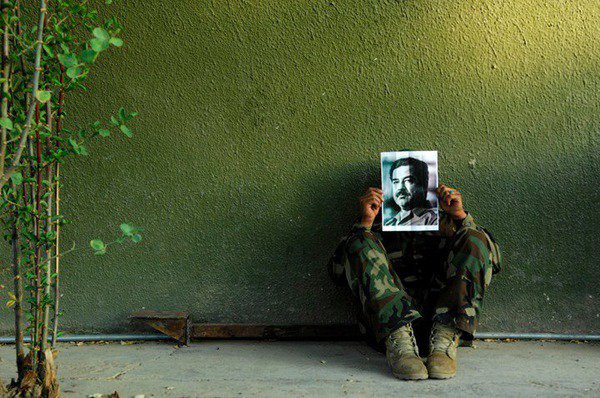 Following studio visits across Iraq, other meetings and much careful thinking, Curator Jonathan Watkins and Commissioner, The Ruya Foundation for Contemporary Culture in Iraq (RUYA), have selected eleven artists to participate in Welcome to Iraq, the official Pavilion of Iraq at the 55th International Art Exhibition – la Biennale di Venezia.

Regarding his selection, Curator Jonathan Watkins says, 'I was very inspired by meeting these artists, hearing their stories and seeing their work in situ. They will impress visitors to our pavilion with their extraordinary ingenuity, their tenacity and goodwill in the face of adversities that stain everyday life in Iraq. We are lucky to have them with us on a world stage, to have an opportunity to enjoy the cultural exchange of ideas that comes with it.''

Abdul Raheem Yassir (b. 1951, Qadisiyah, Iraq) is widely regarded as one of the best political cartoonists now working in Iraq, responding to the absurdity of his circumstances with ironic humour and poignancy. His style is smart in the way it suggests innocence, knowing in its directness. In one of his line drawings, he takes on Iraq's inexperienced police force. Officers are shown diligently frisking a man, apparently unaware of the huge revolver in his hand.

Female artist Furat al Jamil (b. 1965, Mainz, Germany; lives and works in Baghdad, Iraq) is a filmmaker, but has been selected to show one of her rare sculptures. A suspended honeycomb frame drips its contents into a broken antique pot, in order to convey sweet melancholy, a sadness that she feels about her homeland in its current state whilst inspiring hope in the possibility of healing and new life.

Jamal Penjweny (b. 1981, Sulaymaniyah, Iraqi Kurdistan) has garnered attention with his extraordinary series Saddam is Here (pictured above), featuring Iraqis in everyday places – on the street, in hotel rooms, in shops – holding a photo of the former dictator over their own faces, demonstrating the lasting impact of his brutal regime. Penjweny's films document the activities of smugglers, illegally trading weapons and alcohol at the border between Iraq and Iran.

Taking Iraq's lack of ecological awareness in his sights, Akeel Khreef's (b. 1979, Baghdad, Iraq) sculptural pieces are made out of material taken from discarded objects. Bits and pieces of a broken generator and an old bicycle, for example, are used to make chairs, in gestures of recycling that touch on an urgent need for raised consciousness with respect to the environment and limited natural resources.

Hareth Alhomaam (b. 1987, Baghdad, Iraq) will present a short film, Buzz, which exemplifies the stilted, mediated nature of communications between the sexes in modern Iraq in spite of the advent of social media. We follow the short story of a young man and a young woman as they navigate daily life in Baghdad with family and friends.

Another filmmaker Ali Samiaa (b. 1980, Baghdad, Iraq) will be presenting a new film, The Love of Butterflies, for the occasion of his participation in the pavilion. It tells a story in which dramatic tension is derived from a balance struck between marital infidelity and family commitment, between a firm moral stance and sympathy.

Cheeman Ismaeel (b. 1966, Sulaymaniyah, Iraqi Kurdistan) is a painter who applies her decorative style not only to canvases but also to household objects, such as a television, a clock, an oil heater and a lunchbox. The proposition is refreshingly personal and unpretentious, blurring the line conventionally drawn between fine art and more domestic concerns.

One of the youngest artists in the exhibition, Bassim Al-Shaker (b. 1986, Baghdad, Iraq), is stylistically one of its most traditional, making oil paintings that would very much impress his teachers at the local academy. Eschewing any sign of avant-gardism he paints scenes of the southern marshlands, suggesting a lifestyle there of unbroken tradition. The recent reality is very different, of course, this being a place that suffered terribly during Saddam's dictatorship.

The canvases of Kadhim Nwir (b. 1967, Qadisiyah, Iraq), on the other hand, are more abstract and reflect urban life through a combination of distressed colour and graffiti-like drawing. Stencilled letters and numbers sometimes convey clear messages – 'IRAQ', '2003' – or they embody a meaning known only to the artist, superimposed on layers of vague pictorial references. Such expressive and complex mark-making, in light of difficult circumstances, reads as a kind of existential self-awareness.

WAMI is an artistic partnership quite rare in Iraq. Yassen Wami (b. 1973, Basra, Iraq) and Hashim Taeeh (b. 1948, Basra, Iraq) work together to make installations of furniture from new and used cardboard. The poor material and basic, minimalist style they prefer are entirely at odds with a popular taste in Iraq for gilded home furnishings. Their ethos of 'making do and getting by' – articulated with great wit – is a far cry from incongruous aspiration.

A catalogue with texts by Jonathan Watkins and acclaimed writer Tamara Chalabi will be published to coincide with the opening of this exhibition.

About Ruya Foundation for Contemporary Culture in Iraq

Ruya Foundation for Contemporary Culture in Iraq (RUYA) is an Iraqi registered non-profit, non-governmental organization founded by Iraq art and culture enthusiasts with the aim of aiding and enriching culture in Iraq and building bridges with the world. The foundation's goal is to promote and foster culture in Iraq at a time when priorities are focused elsewhere, and to build a platform that will enable Iraqis in the arts, the young in particular, to benefit from, and participate in international events. In addition to supporting local projects, its aim is to create a network of intercultural events that can contribute to the development of civil society in Iraq. It is also committed to nurturing a multicultural dialogue through the arts.

Welcome to Iraq will be held at Ca' Dandolo on the Grand Canal, a 16th century building that has not been used as a pavilion before during a Venice Biennale. The domestic atmosphere of the building will be retained to a large extent through the use of existing furniture and minimal imposition on current architectural features.