The show brings together existing works from the Zabludowicz Collection alongside a series of new commissions and works by other artists selected by the curators. The project sets out to examine how sound inhabits an exhibition space, particularly the way in which it spills or bleeds into and between art works. 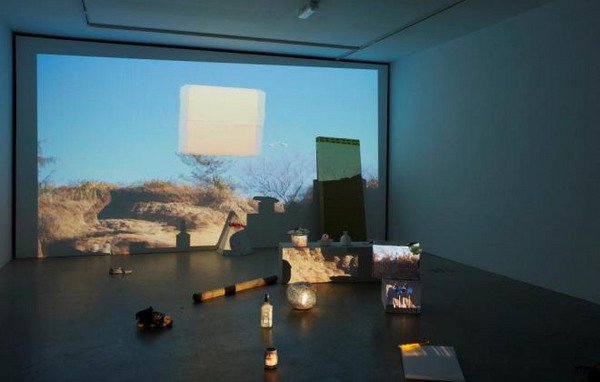 Sound Spill, a group exhibition curated by Thom O’Nions and Richard Sides, a curator and an artist who have been awarded a curatorial research grant to develop the exhibition after a research period in New York City. Sound Spill will bring together existing works from the Zabludowicz Collection by artists including Fischli/Weiss, Amalia Pica, Seth Price and Raphael Zarka alongside a series of new commissions and other works selected by the curators in the lead up to the exhibition.

Sound Spill is an ongoing project by Thom O’Nions, Richard Sides and Haroon Mirza. This will be its fifth manifestation after versions in the UK at S1, Sheffield; Spike Island, Bristol and Seventeen, London as well as at West in Den Haag, The Netherlands.

This iteration of the project will be divided into two sections, the first on the 7th floor and the second on the 33rd floor of the iconic Manhattan building.

The 7th floor contains a set of prexisiting works, including works from the Zabludowicz Collection, alongside a new commission by Trisha Baga. The interaction of the sound made by each work dictates and structures their arrangement, creating a composition. This model allows for unexpected relationships to be highlighted between works in contrast to a traditional thematic approach to exhibition-making.

For the 33rd floor section of the project the curators have worked with Melissa Dubbin and Aaron S Davidson, incorporating their project Volumes for Sound into the exhibition. Davidson and Dubbin have been invited to produce a new set of speaker sculptures which the curators put forward to a group of 8 artists, asking them to produce a new multichannel sound work that responded to the ideas of the Sound Spill exhibition as well as addressing the particularities of the Volumes for Sound project. New Commissions are being made by: Ben Cain, David Raymond Conroy, Melissa Dubbin and Aaron S. Davidson, Lesley Flanigan, James Hoff, Stephen Sharp and Roc Jiménez de Cisneros, Lucky Dragons, Lorenzo Senni, Ben Vida. Dubbin and Davidson are current Session artists at Recess, Soho, until 25 May.

The curatorial research grant has enabled O’Nions and Sides to spend time in New York in order to seek artists outside the Zabludowicz Collection for inclusion in the exhibition as well as to extend their independent practice in an important contemporary art capital. Sound Spill will include new commissions made for the Collection’s dramatic Times Square location at 1500 Broadway. The resulting exhibition will extend their research interests in the threshold between art production and exhibition-making. Their research can be followed at www.soundspill.org

RSVP ESSENTIAL: Please book with the Book Event Button above or email: ny@zabludowiczcollection.com
Open by appointment only and photo ID needed for entry