Through photography, film, installation, and performances, subREAL examined the ramifications of the 1990s period on the artists working in Romania. The exhibition "Taiping Tianguo" is an attempt to think of actual and concrete, as well as tenuous or even possibly non-existing connections between four artists (Ai Weiwei, Frog King Kwok, Tehching Hsieh, Martin Wong) who lived and worked in New York during the heady days of the 1980s and the early 1990s. 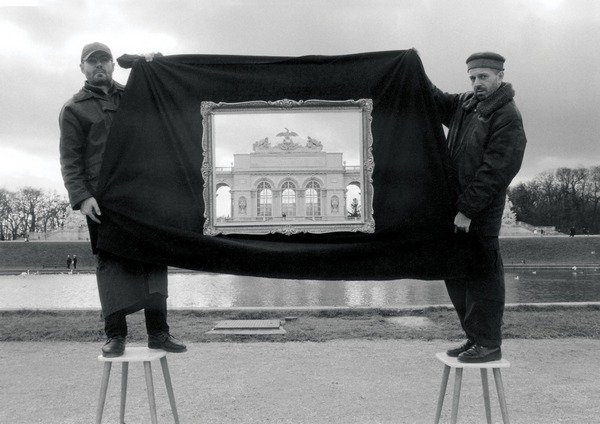 Para Site proudly presents Taiping Tianguo, A History of Possible Encounters. Ai Weiwei, Frog King Kwok, Tehching Hsieh, and Martin Wong in New York at SALT, ISTANBUL. The exhibition is an attempt to think of actual and concrete, as well as tenuous or even possibly non-existing connections between four artists who lived and worked in New York during the heady days of the 1980s and the early 1990s.

Throughout the 20th century, artists traveled to cities in Western Europe and the United States to experience stimulating artistic communities and often a more liberal lifestyle. Now, as the geography of hegemony in art is changing to include new metropolises in the South and East (Hong Kong and Istanbul being two of the most representative examples for this process) and the lifestyles are homogenizing throughout the world, we are in a position to review how earlier moments of artistic migration impacted individual practices and the development of art discourses in different contexts. While Taiping Tianguo looks specifically at four Chinese artists forging their artistic positions while in New York, the relationships they formed present just one set of possible encounters that can be multiplied to imagine similar but also place-specific scenarios occurring across the globe.

Ai Weiwei, Frog King Kwok, Tehching Hsieh and Martin Wong have come to prominence in different ways. While all of them are “Chinese,” they hail from different places, contexts, and lineages and are situated in wildly divergent art historical narratives and discursive matrices. Ai is from mainland China, Kwok from Hong Kong, Hsieh from Taiwan, and Wong from San Francisco: all arrived in New York in the late 1970s to the early 1980s. Ai, Kwok, and Wong returned to their hometowns in the early 1990s, while Hsieh continues to live in New York. Wong died in 1999.

Between these four artists, certain connections are documented or remembered. For instance, Hsieh appears in Ai’s photographs from this time; Kwok provided critical assistance for Hsieh for some of the latter’s legendary “One Year Performances”; and Kwok met Wong and Ai at the KWOK Gallery, the space he ran in Soho. For all four artists, New York in the 1980s and early 1990s represented a time-space, which was filled with freedom and possibilities that incubated their artistic visions and imaginations. This exhibition ventures to propose an alternative narrative to those that disregard these artists’ personal connections in favor of city, nation-specific or formalist histories. It suggests a casual community, a network of acquaintances, and an underground economy. By doing so, it hopes to contribute to a critical reading of this period—the first decade of contemporary Chinese art and the prelude to the era of globalized contemporary art.

“Taiping Tianguo” (Heavenly Kingdom of Eternal Peace) was the name of the domain in Southern China established by the Taiping Rebellion in the mid-19th century. Wong used the name as the inspiration for a painting, and it was in turn used as the title of his posthumous exhibition. The present exhibition borrows it again as a metaphor for the New York of the 1980s and early 1990s, the time-space which was crucial to the lives and works of the four artists in this exhibition.

Taiping Tianguo is co-organized by Para Site and the curatorial initiative A Future Museum for China. The exhibition was first presented at Para Site in 2012. For its presentation at SALT, a detailed time-line, a new selection of paintings by Martin Wong, and three recent objects by Ai Weiwei have been added.

subREAL at SALT Beyoğlu comprises a selection of works from the retrospective exhibition that took place at The National Museum of Contemporary Art Bucharest (MNAC) in 2012. The artistic practice of the “action group” subREAL undertakes political, social and cultural criticism with a sharp sense of humor while creating a vigorous visual language.

subREAL formed in Romania in the April of 1990, right after the “television revolution” that ended the dictatorship of Nicolae Ceaușescu in 1989, by artist Dan Mihălţianu and art historian Călin Dan in April 1990, with the aim of “exorcising the residue of the decades of communist oppression.” The group was shortly after joined by architect and photographer Iosif Király in February 1991.

subREAL investigated the culture of late-communist Romania, its transition into a form of liberal capitalism and the floundering establishment of democratic institutions during the 1990s. Through photography, film, installation, and performances, subREAL examined the ramifications of this period on the artists working in Romania. In their works that focused on myths and clichés of Romanian culture, they explored issues around high modernism; the increasing marketability of art from Eastern Europe; the fetishization of communism; and the problem of independent artistic expression in the post-1989 world. For subREAL, the investigation of the relationship between production and consumerism and their effects on artistic production remained crucial. In addition to producing their own works, in which they combined installation strategies with elements of performance and actionism, subREAL undertook curatorial projects.

The works subREAL produced between 1990-1992 (East-West Avenue; Alimentara; Je t’aime, moi non plus) reveal the layered social, political and artistic setting of the communist period and its subsequent transformation. In 1992, their pivotal installation for the 3rd İstanbul Biennial brought together the rapidly transforming cities of Bucharest and İstanbul. subREAL’s installations of the Draculaland series (1992-1997) were triggered by a reaction to the clichés of the Western press in reference to the Romania of the 1990s as well as to the rising nationalistic discourse; the series combined fiction and reality utilizing multicultural as well as personal sources in complex installations abound with irony and subversion. Dan Mihalțianu left the group to pursue an individual career in 1993.

Now a duo, the one-year residency of the group at Künstlerhaus Bethanien in Berlin marked the beginning of a new stage for subREAL. Their distance from Romanian everyday life allowed them to initiate the Art History Archive series (1995-1996), for which the archival photographic material of a disbanded art magazine became the core material. This introduction was followed by a series of events, installations and performances; The Serving Art series (1997-1999) examined the aura and the universe around the art object, while the Interviewing the Cities (1999-2005) series focused on the characters and support structures needed for presenting art, articulating a subjective but telling register of personal relationships with people, places and objects.

subREAL at SALT Beyoğlu is organized with the contribution of the Romanian Cultural Institute in İstanbul (ICR) and is part of the ongoing collaboration between SALT and ICR İstanbul, initiated in 2011.

subREAL Retrospect at MNAC in Bucharest was curated by Raluca Velisar and organized together with the artists Călin Dan, Iosif Király and Dan Mihălțianu.