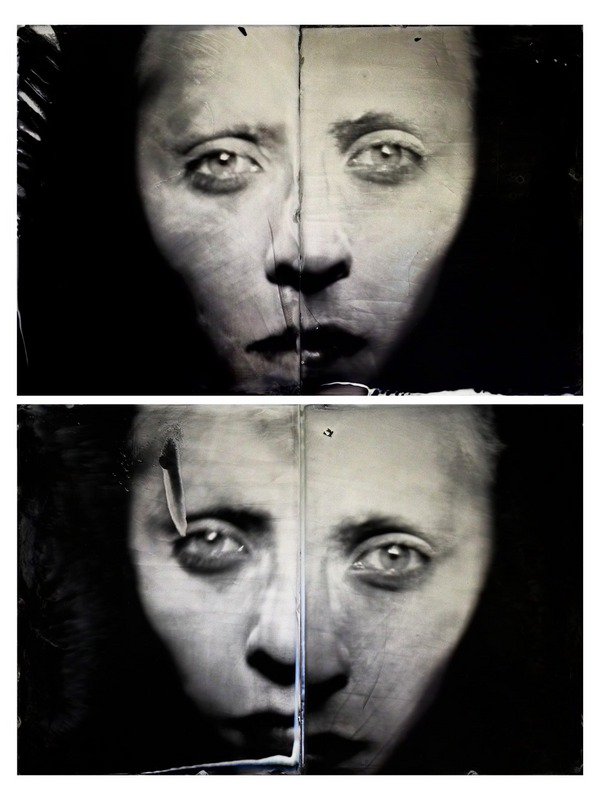 "Katya" is an exhibition of collodion and silver glass photographic plates and bronze sculpture presented in a specifically organized dark space. The project delivers an intimate story of a Russian girl discovered in Moscow by the American artist. Katya, the subject of the exhibition, personifies the archetype of mythic crossroads — a primary theme in Dorsa’s work.

Katya was born in the Far East of Russia to a candy maker and a lighting technician at a local cultural center. When she was 3 years old her parents separated. Soon after, her mother turned to religion and took the veil to become a nun. Mother and daughter moved into an Orthodox monastery, where they stayed until Katya turned 13 and they both relocated to Moscow. With her new freedom in the megalopolis, Katya entered the Moscow freak circle of extreme subculture where she became involved in various forms of body modification.

Katya’s journey from strict Orthodox monastic life, where she spent 10 years from the age of 3 to 13, through the Moscow underground is chronicled on her skin, face and body. Dorsa imprints her form on glass and in bronze, capturing the topography of the untraceable crossroads — a mythic location «between the worlds» as well as a highly personal moment in life, a moment of transition from suffering to illumination. Katya’s body language exposes emotions that reign between brave publicity and fragility. Seemingly identical, images of Katya are reproduced with obsessive repetitiveness, which brings about an intense symphonic effect. The exhibition is as much a penetrating psychological portrait of Katya as it is a self-portrait of the artist.

The choice of the medium — collodion photography — is predetermined by Dorsa’s fascination with American Indian mythology, and in particular, their belief that a photographer is essentially a soul stealer, and his faith in the unique expressive power of the collodion process, which is capable of recording microscopically fine detail. The initial impulse came from an intensely disturbing emotional reaction that Dorsa experienced after seeing the glass plate portrait of an alleged killer of Abraham Lincoln at the US National Archives. Dorsa went to Europe to study this antique photographic technique, and later experimented a lot with different cameras, lenses, and hand-made emulsions. To achieve the desired effect, Dorsa gradually removed all excess elements, until at some point he destroyed the camera and began shooting with only a lens and a camera obscura. Now the lens is the only intermediary element between the model and the glass plate, which the artist holds in his hands, and the image is directly «imprinted» on its surface.

Creating a photographic plate is a long and laborious process. Endlessly repeated, it becomes a kind of ritual, a special form of creative meditation. The artist likens himself to the seers in Plato’s allegory: «Chained, they stared at shadows cast against the rear wall of a cave that was their prison. Such is the view I have of the shadows of my subconscious. My camera obscura is a cave. I am chained in it, staring at the plate, at the shadows and dark images reflected off the bodies and faces which pass in front of my 160 year old piece of glass as I try to capture and display the subliminal».

Dorsa’s exhibition in Venice brings together a significant body of new work realized over the past 3 years. Dorsa’s bronze sculptures, which will be exhibited for the first time, take over from plates in their ability to «imprint» the subject. Seen by the artist as the extension of the medium, they step out of the dark surface of the plate to achieve volume and corporeality.