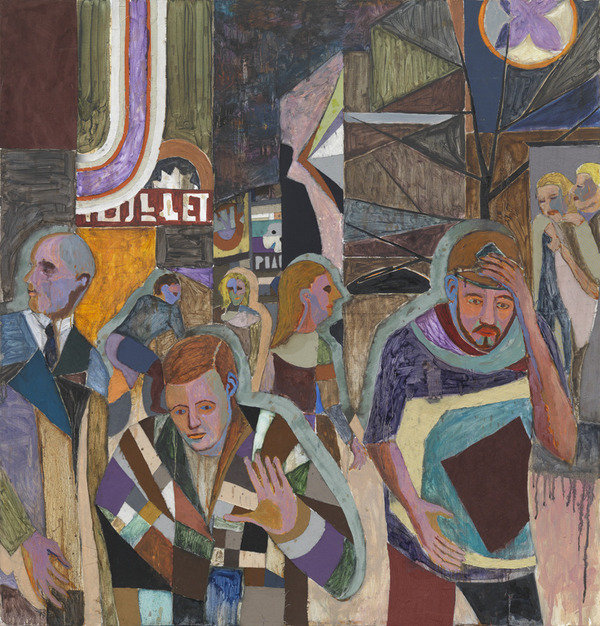 Harris Lieberman is delighted to announce an exhibition of new work by Armin Boehm. This will be the artist’s first solo exhibition in New York.

Armin Boehm’s multi-media approach to painting transforms the traditionally two-dimensional surface into a nearly sculptural experience. By using materials ranging from fabric to concrete, Boehm imbues his works with an unmistakable physicality. However, this material quality feels equally fragile, as if the works themselves threaten to dissolve just as naturally as they formed.

In this exhibition, Boehm presents a new series of densely populated urban landscapes and interiors. Fluctuating between the figural and the symbolic, these fractured groupings appear both plausible and surreal. Influenced by Freud’s psychoanalytic theories, Boehm’s collages seek to examine the tension between human society and the metaphysical mind. By pulling content from memory, the tangible world, and the imaginary, Boehm’s works are as much a mental assemblage as a physical one. The title “Raumneurose”, the fused German words for “room” and “neurosis”, speaks directly to a space where both the unconscious mind and reality may coexist simultaneously.

This tension between the visible and the unseen reasserts itself in Boehm’s faceted abstractions of aerial locale. Although these works are based on precise sites, their original narrative content is obscured to induce subjective interpretation. Oscillating freely between the recognizable and the unknown, these works challenge not only the viewer’s perception of optical depth, but also his or her own sense of physical and spiritual wholeness.

Much like his German Expressionist predecessors, Armin Boehm’s works investigate a sense of personal estrangement, from oneself and others, now made customary by our increasingly technological age. By giving physical life to inner thought and asserting the resistance of materials, he serves to reintroduce subjectivity into contemporary existence.

Armin Boehm was born in 1972 in Aachen, Germany. He graduated from the Staatliche Kunstakademie Düsseldorf and currently lives and works in Berlin. Recent solo exhibitions include WALD HOCHWALD HOLZFÄLLEN at Meyer Reigger Gallery in Berlin and Chiffon Rouge at Galeria Minini in Milan. In 2012, his work also appeared in group shows at CAPC, Bordeaux; Peter Kilchmann Gallery, Zurich; the Stadtgalerie Kiel; Städelmuseum Frankfurt and the Goethe-Institut Johannesburg.