The Rhyme of Ruins. This exhibition will also feature Tang's latest paper works, which stand as a resourceful book depicting the fine virtue of frozen ruins. 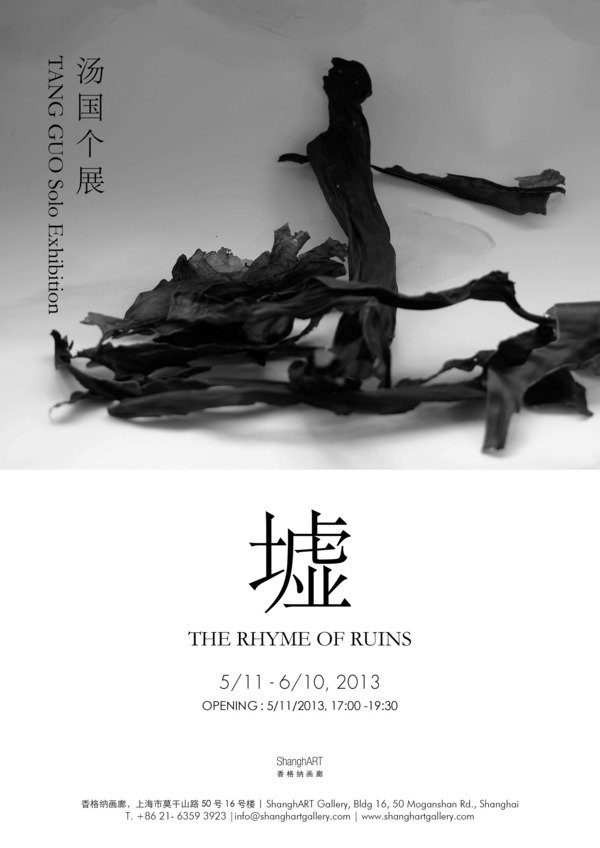 ShanghART is pleased to present the first solo exhibition in this season, The Rhymes of Ruins: TANG Guo Solo Exhibition. Highly recommended by M50 joint openings, this exhibition will be shown in ShanghART main space from May 11th through June 10th, 2013.

Five years have passed since TANG Guo had his last solo exhibition, while his creative inspiration seems to stay the same. In his early years, the inspiration was mainly from his obsession with handmade paper using traditional techniques; then in Shui Kou (Water Source), it was from the temperament of river characterized by its placidity yet tenacity, haziness and elusiveness; later in Human Territory it was manifested as the immortal figures flying against the wind; and now his latest video work The Rhymes of Ruins once again returns to the unforgettable memory of overwhelming flood of water. The work is done in the form of stop motion animation derived from black and white photography, featuring a composition of natural materials, such as dead branches and dry leaves. Though succinct in form, the effect is astonishing and far-reaching, as if it were stretching into endless reincarnation. Dubbed by the artist himself, the work reveals mixed feelings of sorrow, grace, casualness and discontent, being resentful while at the same time admirable, with the intermittent blanks enhancing the impression of a perpetual struggle in the hope of nirvana. This exhibition will also feature TANG’s latest paper works, which stand as a resourceful book depicting the fine virtue of frozen ruins.