Daniel Buren: Broken Squares - Works in situ and situated 2011-2013. An installation with two large, interlocking cabins come face to face in a dialogue; the show is rounded off by a small selection of individual works. "Painting - constructive, concrete" presents works from the Marli Hoppe-Ritter Collection: a broad view of the various facets of abstraction after the Second World War up to the present. 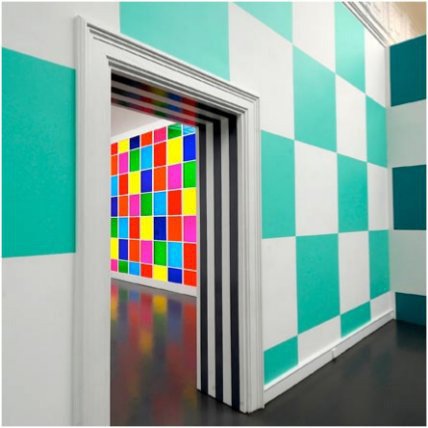 Daniel Buren is a specialist in artistic interventions on plazas, streets and buildings, and in landscapes and interiors. For several decades now he has travelled the world so as to open up new possibilities for seeing through his cunning installations.

The principle of the repeating, vertical, coloured stripe measuring exactly 8.7 cm in width has elevated Daniel Buren to fame. He already developed the idea for this in the mid-1960s as a protest against a tired institutionalised art establishment, which to his mind blocks our view of the essentials. With his patterns of stripes freed of any meaning, he wanted to heighten awareness once again for the geometrical underpinnings of painting and at the same time overcome the boundaries of the customary picture support by extending his in situ compositions across the floor and walls.

Since the 1970s, Daniel Buren’s range of materials has been expanded to include a simply endless diversity of means, such as transparent coloured foil, mirrors, concrete, wood, stone, steel and Perspex. But throughout all this the one constant that has remained with him since 1985 has been the stripes, quite unchanged in their dimensions and disposition. They are the artist’s sole unvarying “visual tool” which he uses in the most diverse locations and situations in combination with an enormous variety of other materials.

In his interventions and installations, Daniel Buren has managed to maintain a balance between a personal artistic form and a context-related language that reflects the specific conditions and qualities of the place at hand, and allows it to be experienced with the senses.
For Museum Ritter he has devised two temporary works that use the large glass surfaces in the open passageway. And both relate directly to the situation he found there: while transparent coloured foil attached to the glazed sections of the passage’s high ceiling create an impressive play of light and colour, a sophisticated striped creation on the glass window front in the passage addresses the underlying theme of the whole museum, the square.

The central work on the ground floor of the museum is the installation Two Exploded Cabins for a Dialog. Two large, interlocking cabins come face to face in a dialogue. The work only becomes clear to the visitor after walking round and through it. Thanks to the silvering of their outer shell the cabins and their location merge in the mind of the beholder to form a single whole.

The show is rounded off by a small selection of individual works.

The new presentation of works from the Marli Hoppe-Ritter Collection gives a broad view of the various facets that went to make up constructivist and concrete painting in the early years of abstraction, and traces out in exemplary fashion their continued development after the Second World War up to the present. This medley of currents in the early avant-gardes reflects the many ways in which artists sought a primal art: some developed a sign-like, at times lyrical rendering of the material world and took as their guide classic motifs, such as the figure or landscape; others, on the other hand, strived to arrive by means of pure colours, forms and structures at an objective visual language which, due to its range of practical applications across the genres, could be claimed to have universal validity. It is notable that after 1918, the avant-gardes forged an international network and exchanged ideas at exhibitions, in their journals and their schools. Consequently this presentation brings together the Dutch De Stijl movement, the Russian and East European constructivists, the French and Italian abstractionists, the Bauhaus, and the abstract artists of Hanover.

Against this historical backdrop, the painters from 1950s onwards turned their attention to new issues: their interest was now directed for instance to the possibilities of lending visual dynamism to the surfaces of the canvas, or to creating systems-based images using computers, or to transforming shaped canvases into visual objects.