S - k - Opiciny. Monkey or human - for what is the better Kind? Fugazzotto incorporates monkey figures into most of his paintings with the intention to reflect human beings. 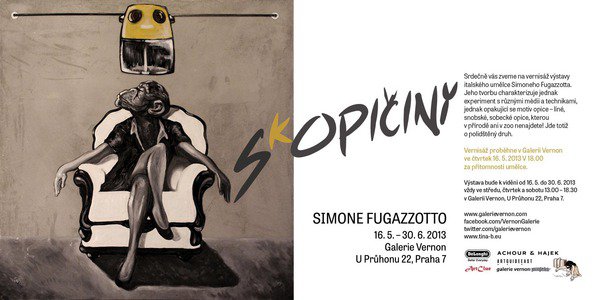 Monkey or human - for what is the better Kind?

”I paint human beings for what we are: as a racistic, stupid, poetic, sick, beautiful and perverse Kind.”

Young Italian artist Simone Fugazzotto incorporates monkey figures into most of his paintings with the intention to reflect human beings. There is hardly a better comparison of a human than a monkey, but Fugazzotto goes further while using monkey-figure to shift a subject's point of view. According to his opinion, art should not be only a mirror of reality or of the artist's inner world, but should provide its receptors an imaginary glasses through which they can look through. ”Therefore”, he says, ”my monkeys are filled of all the feelings and expressions that you can not find in nature: laziness, apathy, boredom, snobbism and fear of ourselves.”

Born in Milan, Italy in 1983, Simone Fugazzotto has built his relationship with visual arts since early age: he was a cartoonist as a child, a lover of art history in adolescence, a painter at the academy. His artistic expression has been shaped throughout various experiences around the world during his quest of a unique identity. He exhibited his works in different art galleries of New York, Paris and Milan. In Czech Republic he participated in TINA B festival of the Contemporary Art, Tauromaquia (2011-2012) in Municipal House, or Salon Vernon exhibition in Vernon Gallery (2013).

Though academically developed, Fugazzotto has detached from classical influences, experimenting with new ways, fusing figures, textures and medias. The artistic media – juta canvas, plexiglass or concrete of which the artwork is created – becomes a mediator itself bearing a message: ”painting with oil color on plexiglass (made with kerosene (oil)) mounted on a concrete board is a new way to see my work, because oil and concrete are destroying our world, thus we are destroying our world. And the worst thing is, that we are doing it while knowing the results.”