13th Ballad, an installation by Chicago-based artist Theaster Gates, is an extension of the artist's 12 Ballads for Huguenot House exhibited at Documenta 13. Think First, Shoot Later examines many of the defining artists and themes in conceptual photography over the past four decades. More than a dozen artists working in painting, photography, sculpture, and installation are represented in the exhibition "Chicago Conceptual Abstraction, 1986-1995". 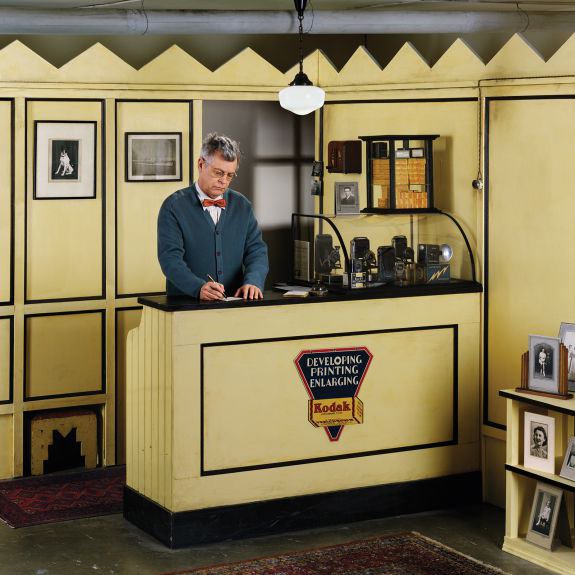 13th Ballad, an installation by Chicago-based artist Theaster Gates, is an extension of the artist’s 12 Ballads for Huguenot House, which was coproduced by the MCA and exhibited at Documenta 13, the 2012 iteration of the international art exhibition that takes place every five years in Kassel, Germany.

Gates, whose practice includes performance, installation, and urban interventions, created 12 Ballads for Huguenot House as part of his ongoing efforts to rejuvenate—both socially and architecturally—his South Chicago neighborhood, a campaign that began in 2006 when he refurbished an abandoned building on South Dorchester Avenue as his studio and home. This effort was later expanded to include abandoned houses nearby, which the artist and a team of local laborers also renovated, reinventing them as alternative cultural spaces while also repurposing their materials to make both functional and purely aesthetic objects. For 12 Ballads, much of the raw building material from the house at 6901 S. Dorchester Ave. was transported to Germany and used in the partial restoration of the dilapidated historic building in Kassel called the Huguenot House—where the carpenters and students who were involved in this effort lived as part of the project—symbolically mending one neglected cultural history with another. Ultimately, 12 Ballads resulted in a poetic exchange of material and music. Before the sister house in Chicago was carefully disassembled, Gates and his collaborators from the musical ensemble Black Monks of Mississippi—an improvisational group that combines black spiritual music with the blues and Eastern chanting traditions—recorded a series of twelve songs and performances in the South Side home, which was later screened in Kassel and accompanied there by another set of live performances by the Monks.

For 13th Ballad, Gates creates a new large-scale installation in the MCA’s Marjorie Blum Kovler Atrium that comprises art objects and materials from the Huguenot House, as well as a set of repurposed pews from the University of Chicago’s Bond Chapel. The pews, having been removed recently in order to offer Muslim students a place to pray, are a symbolic gesture of religious tolerance. Gates thought broadly about spaces of worship while researching the religious persecution of the Huguenots, members of the Protestant Reformed Church of France, who were forced to flee discrimination by the Catholic Church and relocate in Protestant nations such as Prussia (modern-day Germany) between the sixteenth and eighteenth centuries. The installation features a monumental sculpture that showcases the everyday objects left behind by the artists and workers in the Huguenot House. This anchoring work, in combination with the carved wooden pews, creates an ecclesiastical ambiance within the museum, alluding to how art museums, not unlike churches, are sites of pilgrimage and contemplation. Providing context for the project, the MCA Screen presentation in the Turner Family Gallery on the fourth floor reprises key aspects of 12 Ballads, including video footage from Kassel and the original Dorchester project as well as functional objects Gates and his team created for Documenta.

Over the course of the summer, a series of three collaborative performances titled The Accumulative Affects of Migration 1–3 activate the atrium installation and build on the artist’s restoration of the historic Huguenot House. Whereas the majority of the performances that took place in Kassel as part of 12 Ballads focused on soul and gospel music, The Accumulative Affects of Migration 1–3 explores connections between the migration narratives of the Huguenots and black Americans through an experimental patchwork of classical opera and Delta blues. For this component of 13th Ballad, the artist has worked closely with University of Chicago’s Germanic studies scholar David Levin and musician and composer Michael Drayton to create a new body of music based on Giacomo Meyerbeer’s opera Les Huguenots and blues compositions by Muddy Waters. An interdisciplinary group—including Yaw Agyeman, Khari Lemuel, Tomeka Reid, Joshua Abrams, Mikel Avery, Orron Kenyetta, and Kiara Lanier—performs the score, translating and improvising both lyrical content and formal components to musically unite these two seemingly disparate social histories.
Schedule of Performances

MCA Chicago’s in-depth photography holdings trace their trajectory back to the late 1960s, when the medium was reinvigorated under the influence of conceptual art. As in other areas of artistic activity during this period, a previous generation’s fixation on spontaneity, instinct, and truth to materials was questioned and ultimately replaced in photography by an interest in mass media and industrial reproduction, a skepticism of creative genius, and an uncertainty about any easy notion of truth. While modern photography in the first half of the twentieth century may have been guided largely by the “decisive moment,” after the 1960s, much of the photographic work circulating in the fine art realm could be characterized as highly premeditated, systematic, and staged: in other words, this work embodies an ethos of “think first, shoot later.”

Composed mostly of works from the MCA Collection and supplemented by loans from the Chicago community, Think First, Shoot Later examines many of the defining artists and themes in conceptual photography over the past four decades, including numerous examples from the so-called Dusseldorf School of photography, by artists such as Thomas Ruff, Andreas Gursky, and Thomas Struth; the Vancouver School, by Jeff Wall, Rodney Graham, and Stan Douglas; and by feminist artists of the 1970s such as Cindy Sherman, Lorna Simpson, and Ana Mendieta; as well as by a highly diverse range of artists such as James Welling, Wolfgang Tillmans, Torbjorn Rodland, and Elad Lassry, who borrow freely across the range of photographic possibilities. As a whole, Think First, Shoot Later not only offers a glimpse at the broad holdings of the MCA Collection but also gives audiences a sense of some of the most dominant issues defining the field of photography today.

While historically Chicago art making has been strongly figural and representational, the Minimalism and conceptual art movements of the 1960s had a definite impact on many Chicago-based artists who emerged in the late 1980s and early 1990s. The early 1980s marked a sea change in the Chicago art scene as the city’s art schools began attracting students and working artists from around the nation who had absorbed the lessons of the previous decades’ avant-garde and who were influenced by the theoretical writings of historians, philosophers, environmentalists, and literary critics. The following years saw a rise in the number of Chicago-based artists whose works were in the lineage of or consciously referred to conceptual art. The pioneering exhibition program at artist-run space Randolph Street Gallery (founded 1979) allowed many of the artists we now consider Chicago’s finest, such as Jeanne Dunning, Iñigo Manglano-Ovalle, Dan Peterman, and Tony Tasset, both to exchange ideas and to position their works in a broader social and cultural context. Galleries including Feigen Inc. and Feature showed work by these young artists alongside that of emerging national figures such as Charles Ray and Mike Kelley.

More than a dozen artists working in painting, photography, sculpture, and installation are represented in this exhibition, and their modes of abstraction are likewise diverse. Sculptors Richard Rezac and Tony Tasset use simple forms that emphasize the expressive qualities inherent in their industrial materials, while Dan Peterman, a pioneer in exploring environmental and sustainability issues, uses recycled materials to focus his conceptual and aesthetic concerns. Painters Julia Fish and Mitchell Kane abstract nature to an almost unrecognizable degree to create poetic canvases. Using photography, Jeanne Dunning focuses on the landscape of the body, and Iñigo Manglano-Ovalle maps the DNA of twins, both resulting in abstract portraits, while Gregory Green fashions a Minimalist grid out of saw blades in his kinetic installation. All of these artists employ the undeniable beauty of their materials and abstract compositions to convey complex ideas about art history, social issues, and identity.

MCA DNA: Chicago Conceptual Abstraction is part of an ongoing exhibition series featuring iconic works from the MCA Collection and is organized by Lynne Warren, Curator at the Museum of Contemporary Art Chicago.