The 9th solo show by Murakami will display in particular a set of new paintings featuring his famous alter-ego Mr. Dob. Xavier Veilhan, for this exhibition "Mobiles", conceived a new type of mobile, exploiting the qualities of lightness and rigidity of square-section carbon tubes. 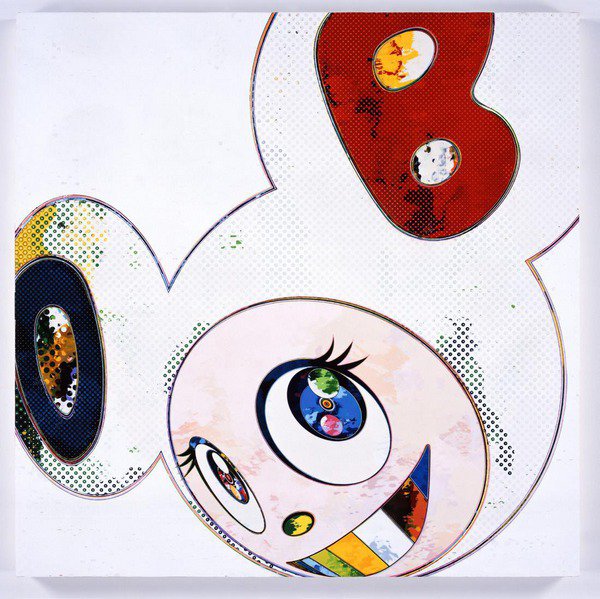 The exhibition in Hong Kong (21 May - 6 July 2013), is the 9th solo show by Takashi Murakami organized by Galerie Perrotin in 20 years of collaboration, that will display in particular a set of new paintings featuring his famous alter- ego Mr. Dob and self-portraits of the artist surrounded by his emblematic characters including Kaikai and Kiki with epure backgrounds of skulls pattern.

After earning his Doctorate in Nihonga painting from Tokyo University of the Arts, Takashi Murakami developed a unique protean style which associated the most modern of techniques with the precision and virtuosity of traditional Japanese art and that of Ukiyo-e engraving in particular. Inspired by Manga and Kawaii culture, his irresistible world is peopled by monstrous and charming characters, facetious descendants of past myths. His theory of the Superflat aesthetic, which he introduced in 2000, attempts to blur the frontiers between popular art and grand art. The absence of perspective, the two-dimensionality of ancient Japanese art, filters in to every medium – paintings, sculptures, prints/silk-screens, wallpaper, animated films and accessories.

Since his first monographic exhibition outside Japan in 1995 at Galerie Perrotin, Murakami has become recognized as one of the most prominent contemporary artists of his time, and his work has been featured in numerous solo exhibitions at museums and art institutions throughout the world. In 2010, France’s renowned Château de Versailles organized an important solo exhibition of his works on the palace grounds. In 2012, a retrospective entitled “Murakami-Ego” was organized by QMA at Al Riwaq Exhibition Hall, Doha, Qatar and included the 100m masterpiece painting “The 500 Arhats”. In 2013, the Leeum Samsung Museum of Art / Plateau, Seoul will organize an important solo show of his works, “Takashi in Superflat Wonderland”.

It is the first time that I exclusively show mobiles in an exhibition. I conceived a great majority of them for the occasion. Without being able to really explain why, I believe that it is the aerial position of the Galerie Perrotin in Hong Kong which inspired this ethereal set. The mobiles imply precision and compliance with the rules of physics but paradoxically live in an infinity of combinations of forms inside this established program. They are the image of the interaction between art and reality. For this exhibition, I conceived a new type of mobile, exploiting the qualities of lightness and rigidity of square-section carbon tubes. The balance of each set is not the only element of the work that seems han) unnatural, but also the way in which each component is like a graphic pattern converting itself into a three-dimensional shape, integrated into reality, despite the laws of physics.”

Xavier Veilhan solo show “Mobiles” organized by Galerie Perrotin, Hong Kong from 21 May to 6 July 2013 gathers a group of recent or never seen mobiles of different various shapes and dimensions.

Xavier Veilhan creates exhibitions in the form of wanderings and site specific d’habitation interventions, in cities, parks or living environments :“Veilhan Versailles”, Château 30 de Versailles, 2009; “Veilhan at Hatfield: Promenade”, 2012; “Architectones”, Los Angeles, 2012-2013, at the Neutra VDL House and at the Sheats-Goldstein Residence; Future “Architectones” include the roof of Le Corbusier’s Cité Radieuse Unité d’habitation in Marseille (1952), inauguration of MAMO by Ora-ïto, Marseille, from 8 June to 30 September 2013; Ste-Bernadette du Banlay Church (1966) by Claude Parent and Paul Virilio in Nevers, France; The Barcelona Pavillon by Ludwig Mies van der Rohe (1929) and Konstantin Melnikov’s House (1929) in Moscow. Veilhan is a multidisciplinary artist. He is possessed of a highly personal artistic universe inhabited by a heterodox range of characters, objects and animals.

Through complex devices, the playful component emerges as a fundamental element in evoking a reality peopled with symbols, metaphors and other semantic ambiguities. Veilhan turns his gaze on the past to deconstruct classical genres and iconographies: a reinvention of the equestrian portrait, the setting up of a distinctive bestiary based on traditional canons or the transformation of the imaginary of the vanitas into objects akin to a pop aesthetic ... in an approach that seeks communion with the viewer in an overall experience. For Veilhan, the possibilities of representation and the art of the exhibition are part of his leitmotif, the ultimate live performance where his works function as part of a greater machinery.