All Traditions Are Inventions. The artist presents a selection of works which make use of History as a tool to interpret, delegitimize or fictionalize it. The pieces put the stories together from personal experiences and historical/cultural events, questioning every official argument and hegemonic channels of transmission of knowledge. 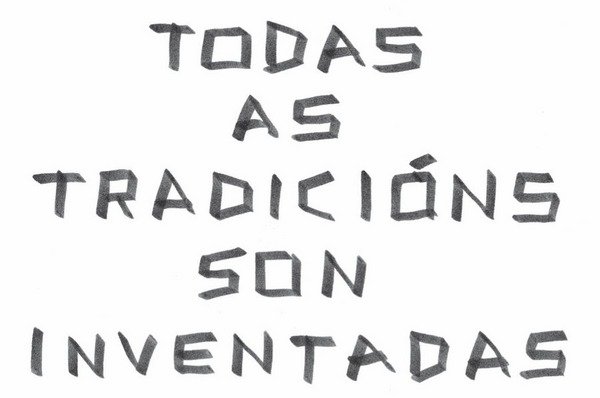 Patricia Esquivias’s solo show at MARCO, Museo de Arte Contemporánea de Vigo, brings a selection of works together, which includes video installations combined with documents and pieces in other media. In 111-119 Generalísimo/Castellana (2013) and The Future Was When? (2009), the filmic narration is accompanied by photographic documentation and mosaics produced by the artist, respectively. The Folklore series, began in 2006, includes the videos Folklore I, Folklore II, Folklore IV, and the videoinstallation Folklore III, in which she establishes a connection between Galicia and New Galicia, Mexican colonial territory renamed in the sixteenth century.

The ceramic mural at the entrance, which reads Hay tanto deseo en la espera como espera en el deseo [‘There is as much desire in waiting as there is waiting in desire’], has been specifically produced for the exhibition, thanks to the collaboration of ceramist Susana González Amado (Taller Terralume), with the support of Fundación Centro Galego da Artesanía e do Deseño.

The title of this exhibition of works by PATRICIA ESQUIVIAS, All Traditions are Inventions, stems from one of the most influential essays by Marxist historian Eric Hobsbawm, in which he describes the recent origin of many traditions that exist in society and that are, however, invented. Their origin may be more or less traceable, yet what they all have in common is their relationship with the past and with history, their legitimating element.

Patricia Esquivias (Caracas, Venezuela, 1979) largely works with text, a material she uses as a basis to build her stories. Either shown in the form of video or installation these narrations tackle aspects of history and everyday life from a personal view. Her works have are strongly performative and processual, derived from the artist’s own interventions as narrator in her videos. Esquivias large career includes exhibitions at Museo Nacional Reina Sofía (Madrid), Tate Modern (London), Frankfurter Kunstverein (Frankfurt), 5th Berlin Biennale (Berlin), White Columns (New York), etc., and she is part of the group or artists ‘INLAND-CAMPO ADENTRO’, which examines the relationship between the city and the countryside and questions the rural life we aim for the future.

In her proposal for the MARCO, Patricia Esquivias presents a selection of works that take history as a tool to interpret, discredit or fictionalise the past with no desire for veracity. These are works that address the transition from past to present, articulating narratives rooted in personal experiences and in historical and cultural events, calling into question official arguments and hegemonic channels of knowledge transmission.

111-119 Generalísimo/Castellana (2013) explores the fate of the ceramic murals created for each of the balconies in a block of five buildings erected in the late fifties on Paseo de la Castellana in Madrid. In The Future Was When? (2009) the modernisation of the underground railway system in New York is compared in its restoration to that of Madrid. The Folklore series, begun in 2006, focuses on the relationship between tradition and modernity that gives rise to a given community's characteristic cultural expressions or folklore. The series includes the videos Folklore I — an interpretation that sums up Spain's development over the twentieth century in the relationships between Franco, Jesús Gil, Lladró figures and the Valencian paella—, Folklore II — parallels between the empires or ‘reigns’ of Philip II of Spain and Julio Iglesias —, Folklore IV — a critical reading of the uses of architecture as a metaphor of power — and the videoinstallation Folklore III, in which she establishes a connection between Galicia and New Galicia, Mexican colonial territory renamed in the sixteenth century by Queen Joanna I of Castile, Joanna the Mad.

Esquivias's works revisit themselves, adopting new interpretations in their successive formalisations. They all start from the interconnections made by the artist, linking biographical elements and memories to inventions and archive material in a performative process. She herself appears as narrator in the videos, that are grouped together in series, and her interventions in other formats intend to revise, over and again, the hidden or silenced aspects of the stories and the multiple and sometimes contradictory meanings they generate.

ABOUT THE CURATOR
Agar Ledo Arias (Santiago de Compostela, 1975) has worked as head of the exhibitions department at MARCO, Museo de Arte Contemporánea de Vigo, since January 2006. Among others, she has curated the cycle ‘Entrar en la obra’ — including Loreto Martínez Troncoso, Wilfredo Prieto, Karmelo Bermejo, Amaya González Reyes or Rubén Grilo — and Pedro Barateiro, Carlos Bunga or Jose Dávila shows. As Chief Curator she has lead proposals by Thomas Hirschhorn, Tania Bruguera, Tino Sehgal or Martin Creed, among others. With a degree in Art History, her career has developed in exhibition spaces such as Centro Galego de Arte Contemporánea (CGAC), Fundación Luis Seoane or BIACS, International Biennial of Contemporary Art Seville (2004).