In his solo show 'Ikiz/Twin', Sarkis creates a universe of dualities at work in multiple layers. Copper surfaces with their reflective and transmissive properties take the central stage in a setting where each floor of the gallery space acts as an original twin to the other. 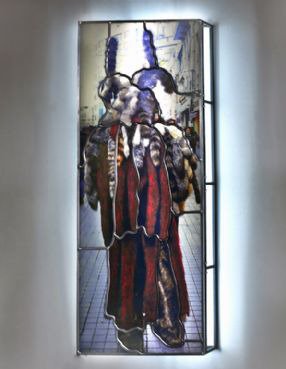 Galeri Manâ is pleased to announce Sarkis' solo exhibition İkiz-Twin in Istanbul from May 23 to July 6, 2013. This first solo exhibition of Sarkis at Galeri Manâ will present a new installation by the artist, bringing together his most recent works.

In Ikiz/Twin, Sarkis creates a universe of dualities at work in multiple layers. Copper surfaces with their reflective and transmissive properties take the central stage in a setting where each floor of the gallery space acts as an original twin to the other. The twins are endowed with minor distortions expressed in the time lapse and spatial divide between the two floors, and also in the substance and the form of each work. Each object is encountered twice but both are of essence, referring to the founding dualisms of the human experience and conception of the universe. This duality is transcended only by the sound element of the exhibition. A musical score fills the entire space; also connecting the exhibition to Sarkis' Ballads installation at the former shipyard in Rotterdam, the distant, ringing sound of bells conveys the song of two whales in dialogue as Sarkis engages in his own conversation with John Cage.

"We hear the far-off sounds of bells or ringing coming from loudspeakers covered with copper. We keep finding ourselves doubled in the exhibition space and look into the face of our mirror-image twin through a curtain of colorful fingerprints. Leaded windows display photographic portraits whose protagonists appear to be saints of everyday life. We find a brownish shirt, worn just by a copper rod, which is adorned with numerous applications. It hangs strangely high on the wall."
–Nico Anklam, March 2013

Since the earliest stages of his artistic practice, Sarkis has searched for an aesthetic language and experience characteristic of our time. A constant urge to create a new language underlies Sarkis' oeuvre, always reflective of the nature of the materials, media and sites he uses. Taking inspiration from autobiographical elements as well as art history, literature, music and film, he emphasizes the historicity and performativity of objects and sites. Through the physical, historical and conceptual encounters he stages, the artist brings new life into fixed and frozen depositories of memory.

Recent retrospective exhibitions of Sarkis were held at Musée d'Art Moderne et Contemporain, Geneva (2011); Centre Pompidou, Paris (2010) and İstanbul Modern (2009). Sarkis has participated at numerous international exhibitions including When Attitudes Become Form (Kunsthalle Bern, 1969), Les Magiciens de la Terre (Centre Pompidou, 1989), Sydney (1989), Lyon (2009), İstanbul (1987; 1989; 1995; 2007), Moscow (2007), Venice (1990) Biennials and Documenta (1977; 1982). In 2012, his installation Ballads was exhibited in the port of Rotterdam with the support of the Museum Boijmans van Beuningen, his stained glass works at the Château de Chaumont-sur-Loire in France at the exhibition Ailleurs, ici; and his installation La Frise des Trésors de Guerre at the Palais de Tokyo in Paris within the Triennale.

Galeri Manâ, located in the Tophane district of Istanbul, is a converted wheat mill that dates to the 19th century. Founded by Mehves Arıburnu in 2011, the gallery seeks to establish an inclusive and interdisciplinary dialogue through its artistic program, special events and publications.

Galata Greek Primary School, constructed in the late 19th century for the education of Greek children in Istanbul, regularly opens its doors to exhibitions and cultural events since 2012.