"A. Quincy Jones: Building for Better Living" is the first major museum retrospective of the Los Angeles-based architect's work; it groups similar architectural typologies together. Neil Beloufa's films focus on the slippery line between fiction and reality. 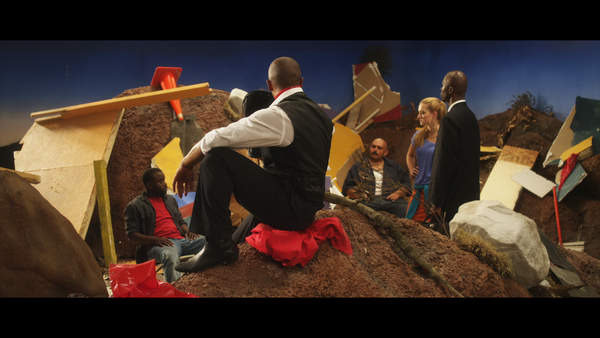 A. Quincy Jones: Building for Better Living is the first major museum retrospective of the Los Angeles-based architect’s work and pays special attention to the unique collaborative nature of his practice. The exhibition is presented as part of the larger Getty-sponsored initiative Pacific Standard Time Presents: Modern Architecture in L.A. Archibald Quincy Jones (1913–1979), who was known as Quincy, practiced architecture in Los Angeles from 1937 until his death in 1979. A quiet modernist and dedicated architecture professor at the University of Southern California, Jones worked to bring a high standard of design to the growing middle class by reconsidering and refining postwar housing and emphasizing cost-effective, innovative, and sustainable building methods. In addition, Jones is among the first architects of this period to view developments as an opportunity to build community through shared green spaces, varied home models, and non-grid site planning. Jones is credited with over 5,000 built projects, most of which still exist today, as the clients and homeowners shared Jones’s compassion for ‘better living.’ Known by architects for designing from the inside out, Jones’s homes and buildings are celebrated for expansive interior spaces, thoughtful and efficient building layouts, and a reverence for the outdoors, which still resonates in contemporary design today. A. Quincy Jones: Building for Better Living is organized by guest curator Jennifer Dunlop Fletcher, Head of Department/Associate Curator of Architecture + Design at the San Francisco Museum of Modern Art.

ABOUT THE EXHIBITION
The exhibition and the accompanying publication are significant additions to the field of architecture history as they illuminate Jones’s largely under-recognized contributions to late mid-century modern architecture and planning. To demonstrate Jones’s ability to work at many scales and across a wide variety of building types, the exhibition is organized thematically. On view in Gallery 4 of the Hammer, the exhibition groups similar architectural typologies together to give a sense of how he designed to enhance the use of a building—the groupings include community developments, large-scale single family homes, work spaces, churches, schools, and libraries. In addition, a central space will be dedicated to mapping Jones’s collaborative practice, which was often aligned with corporate sponsors, developers, and design colleagues with a shared goal of improving livable space not just for economic gain but for societal betterment as well.

The show draws from significant design collections including Jones’s personal and professional archives, which are housed at UCLA in the Charles E. Young Research Library’s Department of Special Collections. The exhibition presents original architectural drawings, a rare Case Study House model, and vintage photographs by Julius Shulman, Ernest Braun and other notable photographers of the period. The architectural drawings include a range of sketches, architectural plans, and exquisite perspective and axonometric drawings by Jones and associate architects in Jones and Frederick E. Emmons’s office, including Kaz Nomura. New photography of many of the projects, which the Hammer commissioned from the photographer Jason Schmidt, are also included in the exhibition with a few key images enlarged to close to actual scale in order to give the visitor a sense of a physical experience of Jones’s architecture.

JONES’S PRACTICE
Jones is equally well-known for the glamorous homes he designed for clients like the actor Gary Cooper and the art collectors Frances and Sidney Brody, as he is for his sensitive and modest housing developments built in the 1950s and 1960s. From 1946 to 1950 Jones worked with a collaborative team of other architects, engineers, and landscape architects to design the Mutual Housing Association of Crestwood Hills, a unique housing cooperative of more than 160 homes in Los Angeles’s Santa Monica Mountains. Additionally, with his professional partner Frederick E. Emmons, Jones designed many Eichler Homes developments in California around San Francisco and Los Angeles. Easy-going and ambitious, Jones worked closely and often with other designers, including architects Paul R. Williams, Frederick Emmons, Whitney Smith, and Edgardo Contini; landscape architects Garrett Eckbo and Thomas Church; developer Joseph Eichler; and interior designer William Haines, among others, throughout his career.

In addition to residential architecture, A. Quincy Jones also designed churches, restaurants, libraries, university buildings, schools, and commercial buildings. Jones prioritized the spatial experience of each building’s interior space, used lightweight structural systems, and had an interest in ‘greenbelt planning,’ making him a premier architect for the residential developments and corporate campuses that flourished during the post-war period. He constantly experimented with materials including steel, plywood, and masonry block construction and put particular emphasis on the siting of buildings to ensure access to light, air, ventilation, and views.

Projects include work for John Entenza’s Case Study House program, Sasha Brastoff ceramics factory, USC’s Annenberg School of Communications, expanded headquarters for furniture manufacturer Herman Miller, and a Tiny Naylor’s restaurant and bar. Notable built projects around Los Angeles, which are still in use, include St. Michael and All Angels Episcopal Church (Studio City, 1962) and the Northridge Congregational Church (Northridge, 1962), both of which feature soaring interior spaces that utilize laminated timber construction, and the headquarters for Warner Bros Records (Burbank, 1975), which brought the warmth of materials associated with the domestic scale to a large office building.

A. Quincy Jones: Building for Better Living is presented as part of Pacific Standard Time Presents: Modern Architecture in L.A., a collaborative celebration of the city’s modern architectural heritage through exhibitions and programs at cultural institutions in and around L.A.

Major support has been provided by the Getty Foundation. The exhibition received significant funding from Alice and Nahum Lainer.

Neil Beloufa’s films focus on the slippery line between fiction and reality. He sets up situations in which both amateurs and professional actors explore enigmatic subjects ranging from extraterrestrials to nationalism, terrorism, and the future. During his Hammer residency in 2012, Beloufa produced a new film exploring the iconography of the red bandana. Disparate political movements and subcultures—including gangsters, hippies, rock stars, cowboys, and anarchists—have long adopted the red bandana as a sign of affiliation or camaraderie. In his installation, Production Value (2013) Beloufa uses the red bandana as a vehicle in which to examine such subcultures and how these groups interact with each other and wrestle with existential issues when faced with a great catastrophe. Production Value will be screened in an installation designed by the artist in the Hammer’s video gallery.

French-Algerian artist Neil Beloufa was born in 1985 in Paris. He studied at Les Beaux Arts de Paris, Paris; Les Arts Décoratifs de Paris, Paris; California Institute of the Arts, Valencia, California; Cooper Union, New York; and Le Fresnoy-Studio National des Arts Contemporain, Tourcoing, France. His work has been shown in contemporary art venues as well as in film festivals around the globe. He has had solo exhibitions at the Kunstraum Innsbruck, Innsbruck, Austria (2012); the Kunsthaus Glarus, Glarus, Switzerland (2012); the Palais de Tokyo, Paris (2012); the New Museum, New York (2011); and the White Box, New York (2008) among others and has been included in numerous group exhibitions. He has participated in several film festivals such as the Toronto International Film Festival in Toronto, Canada (2011); the International Film Festival Rotterdam in Rotterdam, the Netherlands (2012 and 2009); the London Film Festival in London, the United Kingdom (2009, 2010, and 2011) and he received the Grand Prizes at the 54th and 57th Oberhausen Kurzfilmtage in Oberhausen, Germany. Beloufa has won many awards, most recently the Audi Talent Awards, Paris (2011), which partially funded Production Value.

Hammer Projects is a series of exhibitions focusing primarily on the work of emerging artists.