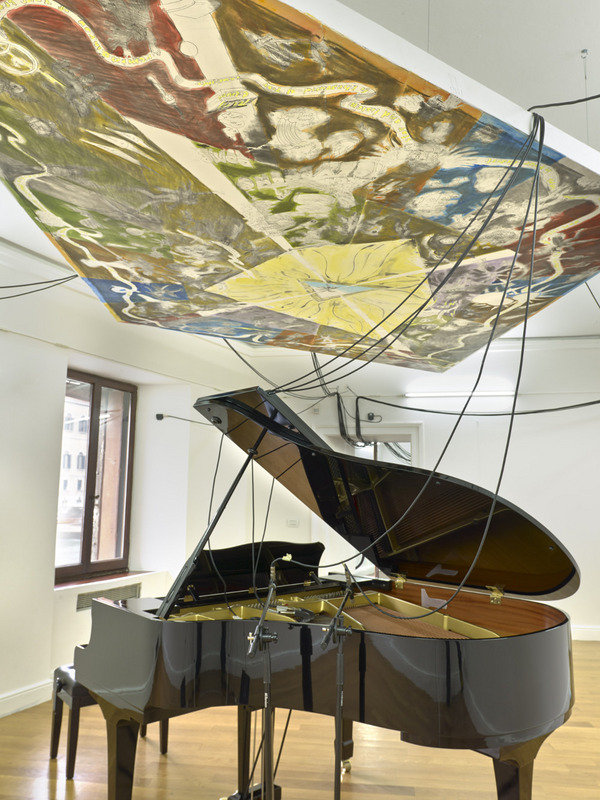 Catherine Lorent works with an expanded Baroque concept of art that exposes the contradictions of the modern western way of life and questions dialectical thought. Her very practice undermines well-established categories, combining painting, drawing and sculpture with performance, music and theatrical stagings into visually and acoustically charged installations.

Her musical project Gran Horno, in which she acts simultaneously as a visual artist and a multi-instrumentalist, epitomises this multidisciplinary approach, which at first sight appears to pander to the current trend towards “event exhibitions”. But Lorent’s work anything but superficial, transposing complex Baroque strategies for a sensual Gesamtkunstwerk into the modern age. Inspired or seduced by her mystical, hermetical work, spectators are often encouraged by its participatory components to give free rein to their own creativity and respond to the artist’s idea with a subjective reinterpretation.

The title of the sound installation shown at Ca’ del Duca – Relegation – refers to the longstanding rejection, or “banishment”, of Baroque in the history of art, nowhere more so than in Venice, where Late Baroque architecture was stifled in its develop- ment by “anti-Baroque polemics”. Contrary to similar Baroque-averse tendencies in the current Berlin art canon, Lorent’s work posits the formal vocabulary of Baroque, which is often dismissed as absurd, wasteful and pathetic, as a central reference point. Citing pamphlets from the seventeenth and eighteenth centuries, Lorent, who holds a PhD in art history, appropriates Baroque iconography relating to concepts of the sublime, power and domination, while highlighting the absurdities and contra- dictions which Baroque artists themselves had been very much aware of. For binary models fall short of explaining the complexities of the world: good and bad or ratio and religio may be antagonistic concepts, but in reality they are closely intertwined. In the Luxembourg Pavilion art and music merge with the palazzo architecture as though in an alchemist’s crucible as Lorent skillfully combines antithetical elements such as abstraction and figuration, highbrow and lowbrow culture, free improvisation and rigid concept.

The exhibition opens with Séismes, a series of unframed drawings of electric guitars and other motifs during an imaginary earthquake lining the aisle like ephemeral manifestations. The long corridor gains claustrophobic momentum when sounds, triggered by sensors, suddenly spill from amplifiers facing the drawings. Walking through the pavilion, spectators unwittingly set off a series of electric guitars via an electro-magnetic control system; each of the guitars, which are hanging from the ceiling, generates a sustained sound thanks to a so-called EBow. Besides these thirteen Gibson Explorer guitars – symbols of rock and pop culture – the rooms along the Canal Grande accommodate three concert pianos – the epitome of classical highbrow culture – which have equally been prepared with EBows to play minor chords that combine with the siren-like guitar sounds to create a haunting atmosphere.

In this sequence of rooms, as indeed throughout the pavilion, the artist’s large-scale drawings have been hung on the ceiling instead of the walls; like Arnold Bode with documenta III in 1964, Lorent thus aims to encourage a perception of art that remains unconventional to this day: the experience of art and space beyond pragmatic functionality. But notwithstanding its innovative and experimental nature in the era of the pervasive white cube and the almighty art market, this approach decidedly stands in the tradition of Baroque ceiling paintings in Catholic churches. Lorent explicitly references the Baroque ornament in the shape of cartouche frames, which help to glorify the subject of the painting, but also the spiritual-mystical symbolism of Freemasonry and alchemy.

A compendium of timeless discussions of the nature of genius, vanity and death, this exhibition can be seen as the apotheosis of life and an invitation to carpe diem, but all the while, spectators, upon entering the last room, cannot avoid the existential questions it asks: the black-lit darkness and the falling angels on the ceiling throw them back on themselves – their human existence, insignificantly small compared to the infinity of the universe, yet holding so much potential. What can we achieve in life? With her four-dimensional Baroque montage – which she will transform into a "living installation" during the opening weekend by performing a series of Fluxus-inspired ‘endurances’ (Catherine Lorent) – Lorent does not so much offer specific answers as a space of dissonance; and while certain aspects of her work may remain hermetic, they never lack a pinch of Baroque humour.Grand Duchy of Luxembourg 55th International Art Exhibition – la Biennale di Venezia

Catalogue
The catalogue Catherine Lorent – Relegation published by Mudam Luxembourg features Catherine Lorent’s exhibition for the Luxembourg Pavilion at the 55th Biennale di Venezia. It comprises a preface by the minister of culture Octavie Modert, a scientific text by art historian Conny Becker and a conversation between the commissioner Clément Minighetti and the artist. An important iconographic section presents a visual tour of the exhibition at the Luxembourg Pavilion.