Here is where we jump. This 7th edition features work by 37 emerging Latino and Latin American artists, from newly-minted to mid-career, who live and work in New York City. The Bienal celebrates the experimental and experiential aspects of contemporary art, and supports the notion that this production is part of the history of contemporary American art. 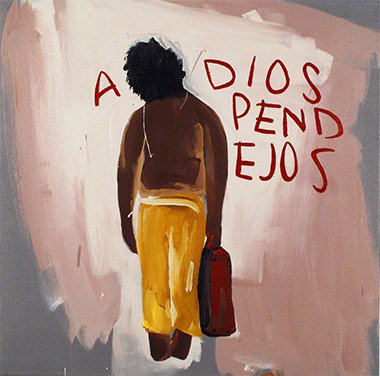 This year, La Bienal features Brazil as the special guest country. Our biennial guest country presents an opportunity for El Museo to remain in conversation with similar urban artistic landscapes throughout Latin American and the Caribbean, and expose our audiences to emerging artists in other locales.

The artists and works in the La Bienal are as diverse in their backgrounds as they are in their creative processes. From Chilean artist Julia San Martin, whose experimental expressionistic work reflects on the violence and persecution experienced by civilians living under a dictatorship, to Puerto Rican artist and Bronx native Manny Vega’s exploration and celebration of collective memory and the shared histories of the African diaspora in the Americas. Likewise, the methods and processes of the artists range from recycling materials to producing traditional objects, as is the case in Sean Paul Gallegos’s exploration of ethnography and sneakers, to Cuban artist Pavel Acosta’s exploration of art and scarcity through Wallscape,” an intervention into El Museo’s gallery walls using stolen paint. La Bienal 2013 showcases paintings, drawings, video, sculptures, installations, and performances.

The exhibition was designed to provide a platform for artists who may not be represented in larger artistic institutions, and who have never shown at El Museo. Through this survey, La Bienal hopes to bring visibility to their work and their creative process. La Bienal is interested in the conditions under which works of art are made and how they are received by the public. The artists’ methods and processes are of significance, as is the context in which they are created and interpreted. El Museo’s Bienal celebrates the experimental and experiential aspects of contemporary art, and supports the notion that this production is part of the history of contemporary American art.

In conjunction with La Bienal 2013, El Museo is launching RADIANCE: After Hours at El Museo, lively evenings of music, gallery talks, special performances and programs, to be held every Wednesday from 6pm-9pm between June 19, 2013 and August 28, 2013.

Press preview on tuesday, june 11, 10am-12pm
Museum Mile festival 6pm - 9pm free admission
5th Avenue becomes your playground with art-making and dancing for all ages during the 35th annual Museum Mile Festival. Visit the galleries, make your own instruments and dance in the streets to the beats of DJ Charo Velecio.