The exhibition hosts "Los Angeles Apartments". In 1965 he took pictures of apartment buildings in Los Angeles and environs, reproducing some of them in his third photo book, Some Los Angeles Apartments. He also used a number of the photographs as source material for linear pencil and graphite drawings. The objectives and detailing of the latter are comparable to monochromatic paintings. 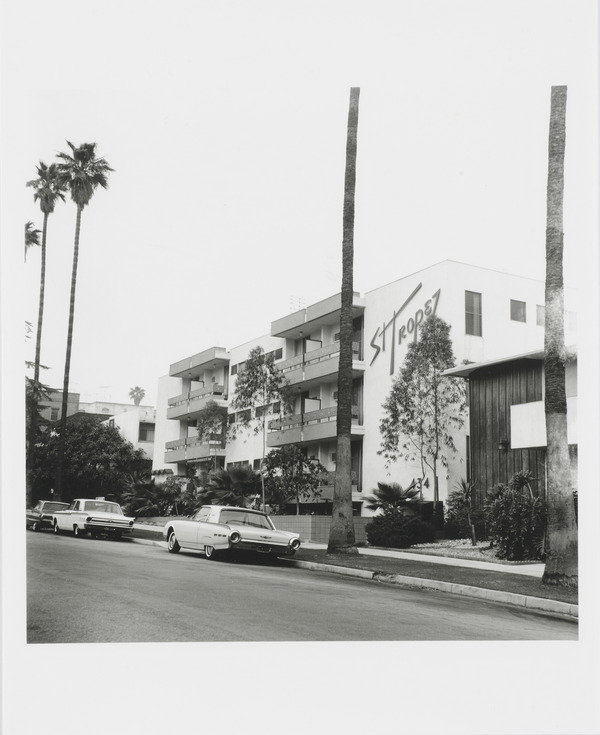 The exhibition presents photographs, photo books and drawings by the American artist Ed Ruscha (b. 1937). In 1965 he took pictures of apartment buildings in Los Angeles and environs, reproducing some of them in his third photo book, Some Los Angeles Apartments. He also used a number of the photographs as source material for linear pencil and graphite drawings. The objectives and detailing of the latter are comparable to monochromatic paintings.

Ruscha has frequently used photographs as the point of departure for his work, treating them essentially as readymades. Gas stations, photographed in 1962 on his trips between Oklahoma City and Los Angeles, demonstrate his unpretentious approach to this medium. He has used his photograph of the gas station Standard Station Amarillo, Texas for numerous prints, drawings, watercolors, and paintings.

The motifs of these works are informed not only by the medium of photography but also influenced by film, particularly Cinemascope. Studies in color, executed in 1962 and 1963 for the large-format paintings Standard Station Amarillo, Texas and Large Trademark with Eight Spotlights, stand in contrast to the artist‘s monochromatic drawings of the apartments. They demonstrate his approach to color, to a palette reduced, as in advertising, to a few emblematic colors: red, yellow, and blue.

The monochromatic, graphite drawings of the Los Angeles Apartments resemble black-and-white photography and are, in fact, reminiscent of prints on photo paper. Photography is thus the prerequisite of the drawings inasmuch as it provides the architectural motifs. However, the treatment of light and projection play a role not only in photography but also in the drawing process itself. “Plain” photographs, taken almost at random as if with the carelessness of the amateur, lead to aestheticized, idealized and unreal images. They practically function as ciphers, recording nothing and in essence embodying the very opposite of what photography has to offer and justifiably claims to be. Photography lends permanence to a specific point in time, the chance encounter, and the fleeting moment; it captures buildings and all the narrative details attendant upon them, like parked cars or clouds in the sky. In his use of photography and drawing, the artist exploits two different modes of ‘illuminating’ the apartments. Traditionally, drawings are assigned to the fine arts while photography is associated with photojournalism and reportage rather than the aesthetically driven, autonomous work of art. In both cases, the stylistic device is that of parody or exaggeration. Just as the photographs in Ruscha’s book ‘disappoint’ viewers because they do not obey the conventions of beauty, the drawings break with traditional notions of drawing and painting. The graphite drawings rather look like ideal photographs. The well-balanced compositions show cropped close-ups of the motifs; they ‘zoom in’ and eliminate anything that might ‘interfere’: cars, telephone poles, power lines. In contrast, the photographs leave their motifs largely untouched, relentlessly pursuing them to the point of being disrespectful and at times even morphing into a detached arbitrariness. Both modes of representation reveal the alienation of human beings not only from their environment but from themselves. The graphite drawings are abstract and realistic atonce, inspired by the realm of the imagination. They are dematerialized dream images that keep escaping viewers even though they are based on photography. Ultimately they are unfathomable, consisting only of light and shadow, existing only on the surface of the paper. Ruscha‘s Los Angeles Apartments become signs of a residential culture that breeds interchangeability and arbitrariness while flaunting the pretense of individuality and making promises it cannot keep. They simply are what they are: “Los Angeles to me is like a series of storefront planes that are all vertical from the street, and there‘s almost like nothing behind the façades. It‘s all façades here—that‘s what intrigues me about the whole city of Los Angeles—the façade-ness of the whole thing.” (Ed Ruscha).

A total of over 60 works by the artist will be on display: photographs, photo books, and drawings. These include loans from the Whitney Museum of American Art, New York, the Museum of Modern Art, New York, the Hirshhorn Museum and Sculpture Garden, Washington D.C., the National Gallery Washington D.C., the Cleveland Museum of Art, Tate Millbank, London, the Tate and National Galleries of Scotland, the Gagosian Gallery New York and private collectors.

The book Ed Ruscha. Los Angeles Apartments is published in conjunction with the exhibition by SteidlVerlag, Göttingen (German and English editions).