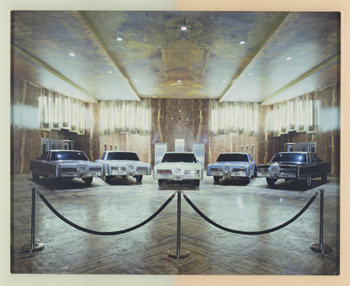 The Aldrich Contemporary Art Museum has been chosen as one of six nationwide sites to exhibit work donated to the Whitney Museum of American Art by eminent philanthropist Emily Fisher Landau. The exhibition will be on view in Ridgefield, CT, from June 8 through September 2, 2013.

This focused exhibition is an iteration of the Whitney Museum of American Art's Legacy: The Emily Fisher Landau Collection, which showcased an historic collection of works—diverse in media—promised to the institution by their long-time supporter.

The Aldrich has chosen twenty photographs—created between 1980 and 2004—that reflect a period when photography as a medium stood at the forefront of contemporary art practice. They highlight Ms. Fisher Landau's enterprising vision and enduring commitment to artists, often from the start of their careers. Her dedication to significant and challenging art is shared by The Aldrich, which also fosters the careers of emerging artists, many of whom have gone on to achieve great acclaim.

Legacy will be presented in galleries adjacent to the Museum's camera obscura, a permanent architectural feature designed to frame discussion around perception and the act of looking. A number of works in the exhibition, including those by Rodney Graham, Vera Lutter, and Abelardo Morell, directly relate to the nature of the camera obscura, and particularly its relationship with the history and development of photography.

Aldrich executive director Alyson Baker said, "It is a great honor to collaborate with the Whitney and to expand the celebration of Emily Fisher Landau's Legacy into the state of Connecticut."

Reception
Admission to the June 8 opening reception for the exhibition Legacy: Photographs from the Emily Fisher Landau Collection is free as part of Connecticut Open House Day 2013, a one-day statewide celebration of Connecticut's art and history, sponsored by the Connecticut Office of Tourism. From 2 to 5pm, visitors are invited to join docent-led tours, participate in creative, photography-inspired family activities, and purchase lunch from the gourmet food truck, Taco Pacifico, which serves California-style Mexican cuisine. For further information, call 203 438 4519. The Aldrich is located at 258 Main Street, Ridgefield, CT 06877.

Catalogue
The complementary publication, Legacy: The Emily Fisher Landau Collection, edited by Dana Miller, includes essays by Donna De Salvo and Joseph Giovannini. The book is published by the Whitney Museum of American Art, in association with Yale University Press, and contains entries on each of the artists whose works are included in the Landau gift, as well as a full-color checklist.

Emily Fisher Landau
Mrs. Landau became a trustee of the Whitney in 1990 and in 1995 established an endowment to support the Biennial, the Whitney's signature contemporary exhibition. In 1991, the Fisher Landau Center for Art, devoted to art education and the exhibition and study of the Fisher Landau Collection, was founded in Long Island City. In 1999, Mrs. Landau established the Fisher Landau Center for the Treatment of Learning Disabilities at Albert Einstein College of Medicine at Yeshiva University and she has also supported programs at Columbia University Teachers College and New York University that help students with learning disabilities. She was made a Chevalier, Ordre des Arts et des Lettres, by the government of France in 1986, received the Haym Solomon Award from the Anti-Defamation League in 2006, and was honored with the 2008 CITYarts Making a Difference through the Arts Award.

Museum
Founded by Larry Aldrich in 1964, The Aldrich is dedicated to fostering innovative artists whose ideas and interpretations of the world around us serve as a platform to encourage creative thinking. The Aldrich is one of the few independent, non-collecting contemporary art museums in the United States, and the only museum in Connecticut devoted to contemporary art. It is one of only twenty museums in Connecticut and only 318 art museums in the country to be accredited by the American Alliance of Museums. The Museum is located at 258 Main Street, Ridgefield, CT 06877. All exhibitions and programs are handicapped accessible. Free on-site parking. Regular Museum hours are Tuesday through Sunday, noon to 5pm. For more information call 203 438 4519 or visit aldrichart.org.

Sponsors
Legacy: Photography from The Emily Fisher Landau Collection is organized in collaboration with the Whitney Museum of American Art and is curated at The Aldrich by executive director Alyson Baker and exhibitions director Richard Klein. This exhibition is supported, in part, by the Connecticut Office of the Arts and The Robert Mapplethorpe Foundation, Inc. The official media sponsors of exhibition openings are Ridgefield Magazine and WSHU Public Radio.