The work of photographer and sociologist Lewis Hine (1874-1940) called for a better world. Hine was adamant in his wish that Americans become aware of the injustice in their nation's legal system. The show "Photography for a change" features a comprehensive retrospective with 170 works and ample documentation. In this anniversary year the museum presents "This Infinite World", its 10th Set exhibition which captures the 20-year history. 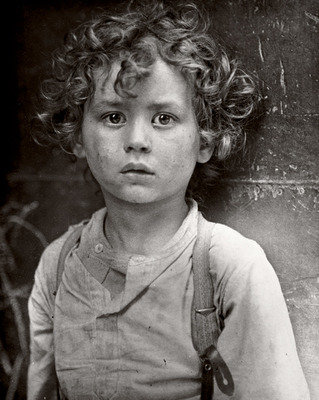 Curator of the exhibition: Alison Nordström

The work of American photographer and sociologist Lewis Hine (1874–1940) called for a better world. Hine was adamant in his wish that Americans become aware of the injustice in their nation’s legal system. A firm believer that every human being deserved full respect, Hine saw photography as the best tool to make this both visible and compelling. To fulfill his mission, Lewis Hine traveled 75,000 km throughout the United States for organizations such as the National Child Labor Committee (NCLC), taking photographs of children at work in agriculture, in mines, industrial factories, garment factories, and on the streets. His images not only contributed to a new awareness and the first reforms against child labor.
They are also some of the earliest and most important contributions to the genre of social documentary photography. Today, a hundred years later, the issues remain the same: in Europe we are experiencing a period of intensive migration that will only increase with time. For us, child labor may be a thing of the past, but only because we have outsourced the manufacturing sectors that operate with child labor to distant lands. In 1930, Hine was commissioned to document the ambitious construction of the Empire State Building in New York. Together with his son Croydon he captured more than 1,000 pictures of the dizzying work (14 builders died on the job) on the 381-metre-tall architectural icon.

As part of this exhibition we will also screen the documentary movie "America und Lewis Hine" (1984) by Nina Rosenblum.

We thank the Sulzer AG for its generous support. The project was sponsored in its entirety by the Terra Foundation for American Art.

Curator of the exhibition: Paul Graham

With This Infinite World Fotomuseum Winterthur presents in this anniversary year its tenth Set exhibition, which captures the 20-year history of the museum in a very special way. None other than the New York-based photographer Paul Graham (*1956 in Stafford/GB) was invited to curate this second anniversary exhibition following Concrete – Photography and Architecture. It was with the solo exhibition New Europe by the then less-known British photographer that Fotomuseum Winterthur celebrated its grand opening in 1993. Now the very same Paul Graham, who was recognized for his photographic achievements in 2012 with the prestigious Hasselblad Award, has returned as guest curator with a carte blanche to present his personal artistic perspective on the 4,000 works that comprise the Fotomuseum Winterthur Collection. With 21 selected works by artists ranging from Diane Arbus to Bertien van Manen, from Lewis Baltz and Luigi Ghirri to Boris Mikhailov, Graham not only examines the creative process behind photographic works, but also questions the position of the photographer in our infinite world:

“Painters as well as writers confront a void they have to fill with their efforts, summoning from imagination and recollection faces, dialogue, imagery, characters, and even colors. But photography from the world? It seems sometimes we have the opposite, but equally difficult prospect: the world is so full of matter, so brimming with potentially significant moments, objects, people, land, skies, light – all moving, shifting, second by second – that we are burdened with not an empty page, but an overflowing one.”

We would like to thank the BTS / Monterosa Group, the Swiss Re and the Stanley Thomas Johnson Foundation for their generous support.

Press Conference Friday, 7 June 2013, 10 to 12 am
Opening: Friday, June 7, 2013, 6 – 9 pm
At 7 pm Urs Stahel will make welcoming remarks. Paul Graham and Alison Nordström will provide an introduction to the exhibitions. This evening Urs Stahel will also take his leave of the museum after serving as co-founder and director of the Fotomuseum Winterthur for 20 years.