"Works on Paper" brings together significant drawings by Bontecou, dating from her early career in the late sixties to more recent works, some never before exhibited publicly. Sasnal's artistic practice creates an archive from the sprawling mass of images that flood contemporary society. 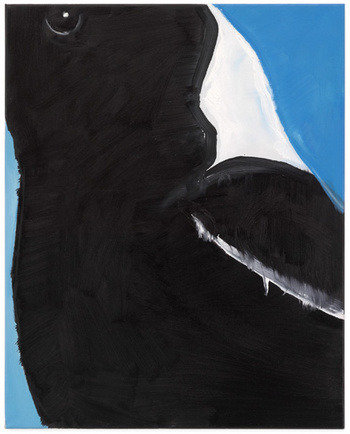 Hauser & Wirth is proud to present a rare exhibition of drawings by the American artist Lee Bontecou, whose enigmatic practice defies attempts to categorise her work within the traditional doctrines of art history. ‘Lee Bontecou: Works on Paper’ brings together significant drawings by Bontecou, dating from her early career in the late sixties to more recent works, some never before exhibited publicly. This landmark exhibition at Hauser & Wirth’s Zurich gallery acts as a preview to the artist’s major drawing retrospective opening at The Menil Collection, Houston in spring 2014.

Born in Rhode Island in 1931, Bontecou is one of the few female artists to have gained international recognition during the 1960s. Her works are featured in the collections of numerous important museums and institutions. She was the subject of an acclaimed retrospective that opened at the Hammer Museum, Los Angeles CA and travelled to the Museum of Contemporary Art, Chicago IL and a major solo exhibition at Museum of Modern Art, New York NY.

Over the past five decades, Bontecou has used drawing to create intricate and immersive depictions of the wondrous and the sublime. These drawings are a treasure trove of polarities, which Bontecou marries together seamlessly. They are at once organic and mechanistic; futuristic and archaic; figurative and abstract; beautiful and menacing.

Bontecou has long been fascinated by both nature and science – interests that have played an important role as key motifs in her drawings. The earliest work in the exhibition, ‘Untitled’ (1969 – 2006), features a large flower with a thick stem and numerous petals radiating outwards. Beams of light shoot out from the petals as if the flower was illuminated, or even radioactive.

This ‘botanical surrealism’ continues in Bontecou’s later drawings, which combine organic forms with elements of the man-made environment and science fiction. In an untitled drawing from 1985, Bontecou depicts a field of flowers whose blooms have transformed into satellites, spinning airplane propellers and monstrous, alien-like figures. In another untitled drawing from 1994, Bontecou presents two windows, seemingly looking out onto a landscape that is at first glance recognisable. However upon closer inspection, the mutated forms take shape and the scene becomes nightmarish. Flowers emerge from lunar craters on a desert landscape, blossoms turn into biting mouths and petals become sharp spikes.

These works also highlight Bontecou’s unique experimentation with the materiality of her media, ranging from casein, printer’s ink, and soot from the artist’s welding torch to a combination of silver pencil, white charcoal and graphite, which, set against the deep black of the paper, gives her ghostly drawings an ethereal luminescence.

Bontecou’s recent drawings will also be on view at Hauser & Wirth Zürich. Using white and coloured pencil and pastels on paper, Bontecou crafts painterly landscapes, which the artist calls ‘worldscapes’, resembling ocean vistas, with the same mechanical precision seen in her early drawing.

Hauser & Wirth Zürich is proud to present an exhibition of new works by the Polish artist, Wilhelm Sasnal. Sasnal’s artistic practice creates an archive from the sprawling mass of images that flood contemporary society. His source material is taken from newspapers, magazines, films, the Internet, billboards, his immediate surroundings in Poland and his many travels. This vast diversity of motifs goes hand in hand with Sasnal’s sampling of different painting styles from the 20th century, whether Geometric Abstraction, Tachism, Photorealism or Pop Art.

In his new paintings, Sasnal explores the sensation of losing control through two seemingly disparate subjects: wounded motorcyclists lying on a racetrack after a wreck, and outer space. Using a muted palette of gray, blue and black, he presents the moment when space becomes apparent, both in the physical sense of falling to the ground, as in the paintings of the motorcyclists, and in the more abstract sense of the great emptiness of the universe, as in his paintings of solar systems and space.

As a child, Sasnal frequently visited the racetrack in his hometown of Tarnow. Memories from these trips serve as the subject matter for his new paintings. The works show anonymous motorcyclists lying on the ground after a wreck, or struggling to get back on their feet.

Space travel and the solar system have been prominent motifs throughout Sasnal’s oeuvre and the moment of losing control over the forces of gravity is found in Sasnal’s paintings of craggy moonscapes. Sasnal shows the barren, rocky surface of the moon flipped upside-down, as if being viewed whilst tumbling to the ground.

Sasnal further develops the theme of outer space and science fiction with paintings of astronaut’s helmets and distant planets, some inspired by Polish author Stanislaw Lem’s science fiction novel, ‘Solaris’. One of the largest paintings in the exhibition is a vibrant yellow sky, mapping a fictive star system. Yet instead of stars, Sasnal transforms the constellation into a mechanised cluster of gears and belts, turning in the sky.

Complementing these works, Sasnal shows paintings of cinematic and atmospheric density. A portrait of a young woman at the break of dawn, laying herself down on the banks of the Vistula River in Cracow after a long night, shows the faint lights of the city still glowing in the distance as the first rays of sunlight break through the clouds.